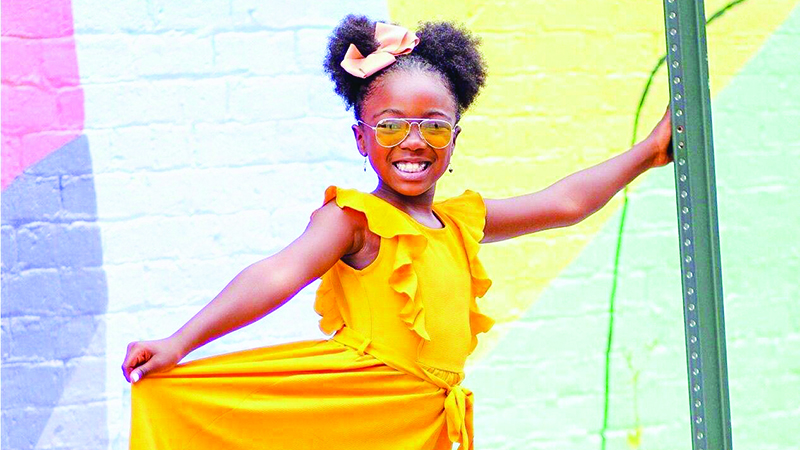 At just 10-years-old, London Dailey has already gotten a taste of the business world and doesn’t plan on stepping away from it anytime soon.

Dailey, under the watchful eye of her mother, Tomorrow Jenkins, operates Slime Time by London, a smaller online store on a section of her mother’s website, A Touch of Grace, where she sells a series of children’s accessories and even a few items for older people.

Dailey began operating Slime Time in 2017 when she was seven years old after she watched her mother run her own business. At the time, she did sell slime, but that disappeared from her inventory when she grew out of it, she said. Instead, she began to focus on selling items like sunglasses, hair accessories and even fidget spinners, items that proved to be popular for clients of all ages.

Both Jenkins and Dailey previously lived in Hogansville but the duo has since moved to Logansville. They still make trips back to the Troup County area for pop-up events and to visit her family. Recently, Dailey met many new customers at the grand opening of Hogansville’s Business Connection Group Co. and sold out of the selection of pop-it toys she brought with her. She said she now knows to bring plenty of extra inventory to future events.

Dailey’s mother, with 20 years of business experience under her belt, understandably handles the financial avenues of the business on top of her own, but said she’s slowly introducing her daughter to the concept of bookkeeping.

“This whole thing has allowed me to see her on a whole different spectrum,” she said. “For her to have a business mindset and that she thinks of how she can make this business better for others, or how [she] can be a benefit to the community or how [she] can help those who are less fortunate than [her]. That’s something I pride myself in teaching her. “

During the last year, her business, like many others big and small, had its setbacks, but London took each hurdle as a lesson.

“It’s been difficult because when we get our [merchandise] people order from us, it comes late because of fees and such,” she explained.

The pandemic would end up helping her slow down just enough for her to brainstorm what she wanted to add to her store.

Currently, Dailey is working on a clothing line for her customers, as well as her own children’s book series.

“My first book of the series is Smart Kids Presents: Helping Others, and it’s basically about how [several] kids were playing catch at the park, and they see a homeless guy and they’re wondering why he’s digging in the trash, and they’re making fun of him,” Dailey said, adding that the book teaches a lesson on not judging others and how to be kind.

Dailey came up with the idea after experiencing similar situations herself, she said. Whenever she sees a homeless person now, she gives them a dollar, which she hopes helps them.

Dailey expects to launch the book later this year or early next year, she said. Her upcoming clothing line, which will also be named Smart Kids, will feature a mix of her own friends and characters from her book.

As the industry itself, as well as Dailey’s own tastes, change, the pint-sized entrepreneur plans to keep going.

“I’m going to continue with it probably 10 more years until I get at the age where I want to sell something new,” she said. “I’m going to keep adding new stuff to what I have now.”

As she becomes more noticed in the business community, she hopes she can inspire other developing entrepreneurs to follow their own dreams like she was able to.

“I would say don’t give up, do your best and keep trying,” she said.

Check out all London has to offer and what’s coming next for her at https://www.atouchofgrace.shop/collections/londons-corner.