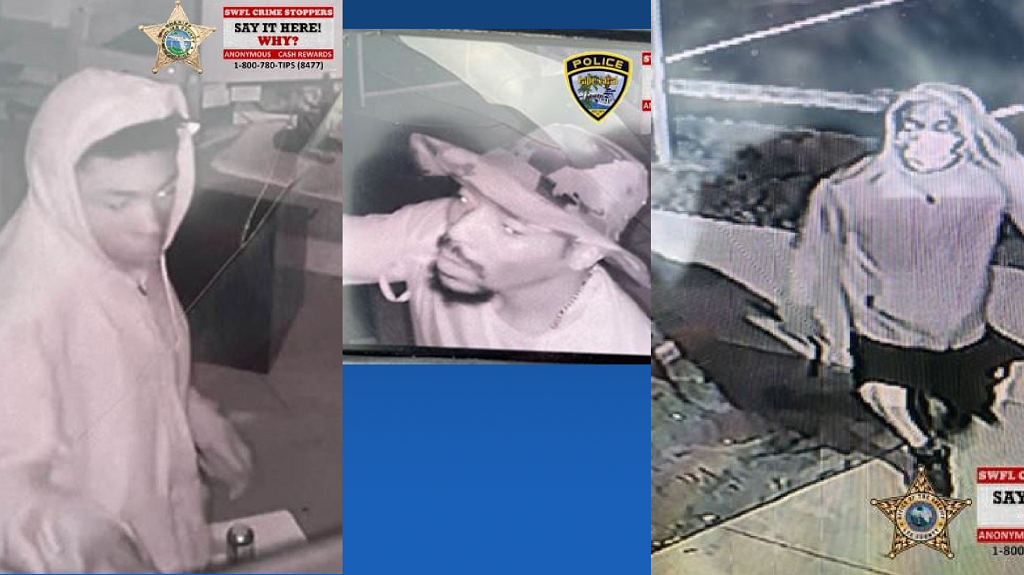 Investigators are searching for three suspected burglars all caught on camera taking cash from a business’ locations across Southwest Florida.

Each time, the crooks left damage and stole hundreds of dollars.

The district manager believes at least $600 was stolen. When employees of Florida Sales & Marketing Inc. In Fort Myers showed up to work Wednesday morning, they noticed the windows broken with glass everywhere. Wanted signs now hang on the front door. The company hopes to catch the people responsible.

District Manager Patrick Merritts is still scratching his head at all the damage.

Merrits arrived at work and found $200 missing from the cash box at his Fort Myers location.

“We showed up and saw the damage to the buildings,” Merritts said. “Then, we saw the broken windows, and then, we had video footage of different things that had happened with it.”

It’s a reoccurring nightmare for Merritts and his company because he says burglars broke into the window of his Cape Coral location last Sunday.

Merritts took photos of the damage done to the doors and windows.

A few months before that, money from a cash box at his Naples location was also stolen.

“Being a family-owned company, I mean, it’s hard,” Merritts said. “And we put our hearts and souls into everything we’re doing here.”

Southwest Florida Crime Stoppers is searching for three unknown suspects who Merritts says were caught on his surveillance cameras breaking into the separate buildings.

Merritts is hoping anyone who recognizes them can help track them down.

“Do the right thing,” Merritts said. “If you know who it was, who had done it, you wouldn’t want somebody to break into your house, and here they’ve broken into ours.”

Cape Coral Police Department believes one of the burglars might be driving a dark four-door sedan.