3 Tech Stocks Poised for a 2022 Rebound – The Motley Fool

After a great run in 2020, some tech hardware companies took a breather in 2021. In spite of unrelenting demand for new technology, many top names in the world of technology simply rose too far too fast last year.

However, one year’s worth of stock market underperformance (the S&P 500 is up 18% year to date, in case you were wondering) doesn’t mean a growth story is done for. On the contrary, a growth stock rebound could be in store for 2022. Three Fool.com contributors think Taiwan Semiconductor Manufacturing (NYSE:TSM), Fastly (NYSE:FSLY), and II-VI (NASDAQ:IIVI) are thus worth a serious look right now. 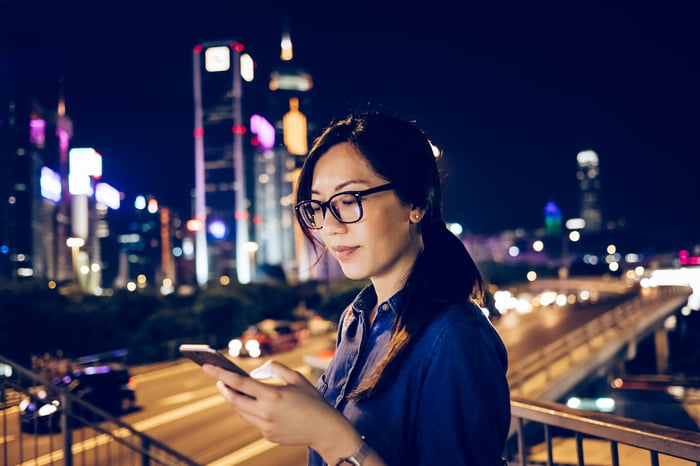 What happens when you can’t keep up with demand?

Nicholas Rossolillo (Taiwan Semiconductor Manufacturing): Though it may rank low on the list of most household names in technology, Taiwan Semi is a monster powering all sorts of high-end computing we use every day. The company is the world’s largest chip fab, commanding a nearly 60% market share of chip manufacturing last year. Given the persistent shortage of supply for all things electronics as of late, it would seem this stock would have been a top buy for 2021.

Not so. Shares of TSM are up a meager 3% so far this year — although it advanced some 90% last year in the immediate aftermath of the pandemic. What gives?

For one thing, substantial optimism got priced into the stock ahead of widespread news headlines informing the general public of the dire shortage of computing components available. Also, since this is a manufacturing company, worry has mounted that booming sales won’t last forever.

Nevertheless, though the stock is lagging the market this year, that doesn’t mean TSM as a business has performed poorly. On the contrary, through the first three quarters of 2021, revenue is up 17.5% from last year to 1.15 billion Taiwanese dollars ($41 billion U.S.). And in spite of elevated expenses to expand manufacturing capacity, profits have remained robust along the way. Earnings per share are up 14.7% so far this year compared to last.

More importantly, though, management stated on the third-quarter 2021 earnings call it expects very high profit margins to continue for years to come. Specifically, gross profit margin on products sold — which has been elevated this year because of high chip prices — could remain over 50% “for the long term.” 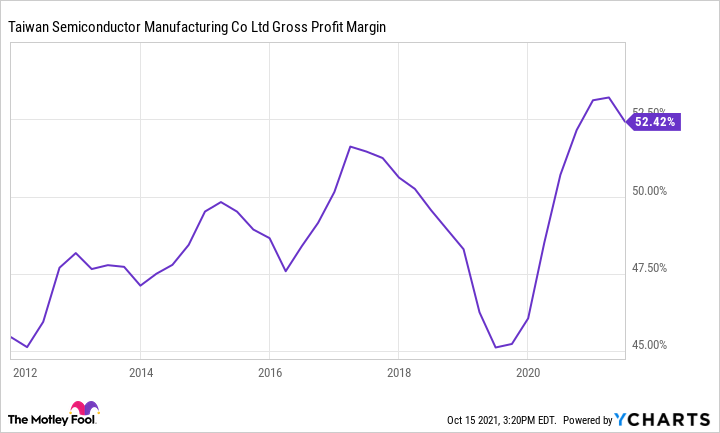 What does that mean? Taiwan Semi has a huge backlog of work to catch up on. But it also speaks to the company’s ability to continuously innovate smaller and more powerful product production for smartphones, data centers, vehicles, and more. With the chip shortage expected to continue well into next year and possibly into 2023, a rally looks possible for this semiconductor leader.

Forget about the TikTok drama

Anders Bylund (Fastly): Network security and content delivery expert Fastly has recovered somewhat from the market bottom of early October, but the stock is still on sale. Share prices are down more than 65% in 52 weeks, as if Fastly’s business growth was hitting a rock wall.

That’s a big misunderstanding that sets Fastly investors up for fantastic returns from these rock-bottom share prices. This sure doesn’t look like a dead growth stock to me: 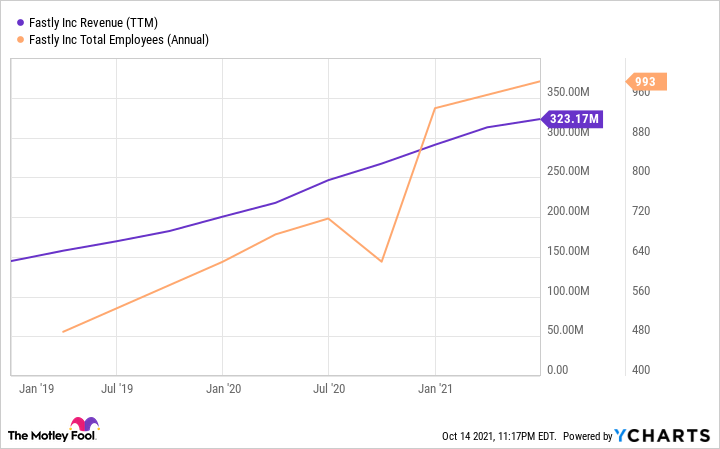 The bears argue that Fastly is suffering the loss of its largest customer, as regulatory restrictions still cloud the company’s relationship with Chinese-owned social media giant TikTok. That’s unfortunate but hardly the end of the world. At the start of the coronavirus pandemic, TikTok’s content delivery orders accounted for more than 10% of Fastly’s quarterly revenue. Yes, that’s a large customer, but Fastly doesn’t live and die by that contract alone. The company can now redirect the networking assets that used to be earmarked for TikTok’s use into other customer relationships.

So Fastly deserved a slap on the wrist when government orders separated the company from TikTok. Instead, Fastly shares got a massive haircut.

The business is still in great shape, just so you know. Sales rose 14% year over year in August’s second-quarter report. Fastly’s customer count rose from 2,458 to 2,581. The net retention rate across the last four quarters was 135%, which means that the average contract renewal was signed at a 35% higher top-line value than the deal it replaced.

Fastly is doing just fine and should get back on its feet in a hurry as investors start to forget about the fading TikTok drama. In the meantime, you can pick up Fastly stock on the cheap.

This beaten-down value stock is playing in high-growth markets

Billy Duberstein (II-VI): Pronounced “two-six,” II-VI produces engineered materials for a wide variety of next-gen tech applications, and has had a rather disappointing 2021. After a hot start to the year, II-VI has been on a downturn ever since it won a bidding war for rival Coherent back in March. Shareholders at the start of 2021 now find themselves 24% poorer, and those who bought at the February top are down over 44%. 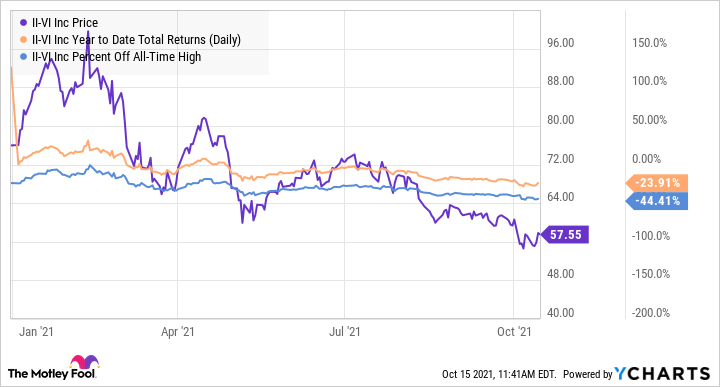 After its fall, II-VI trades at just 14.5 times its fiscal 2021 free cash flow. The acquisition of Coherent is still pending, and that would add a lot of debt to II-VI’s balance sheet, but also increase total profits, so the future numbers may be different.

Still, fears over Coherent’s price tag may be overdone; II-VI actually has a quite a long history of successfully integrating acquisitions and wringing synergies out of its transactions. It is currently buying Coherent for about $6.8 billion, or about 31 times next year’s earnings estimates. That’s expensive, but management is also targeting $250 million in cost synergies as a result of the deal. When adding synergies on top, II-VI is really only paying between 14 and 15 times next year’s operating earnings for Coherent.

II-VI’s main business is in the optical communications market, where it gets two-thirds of its sales. Yet the Coherent deal will diversify II-VI’s portfolio into high-growth areas like industrial lasers, semiconductor equipment components, and life sciences equipment. And there are some very exciting new growth drivers on the horizon that aren’t even in current results.

Most notably, II-VI is investing $1 billion over 10 years toward the development of silicon carbide, a material that more efficiently converts power to torque and will be crucial in electric vehicle powertrains. From a small base of $500 million today, management sees the SiC market exploding with EV adoption to a $30 billion market by 2030, good for a compound annual growth rate of 50%.

Hopefully, the acquisition of Coherent closes in the coming months, and since II-VI’s share price has been battered in 2021, 2022 is shaping up to be a potential rebound year. After all, the stock is cheap, and with a growing position in so many exciting end markets, II-VI looks like a solid pick for value investors heading into the new year.