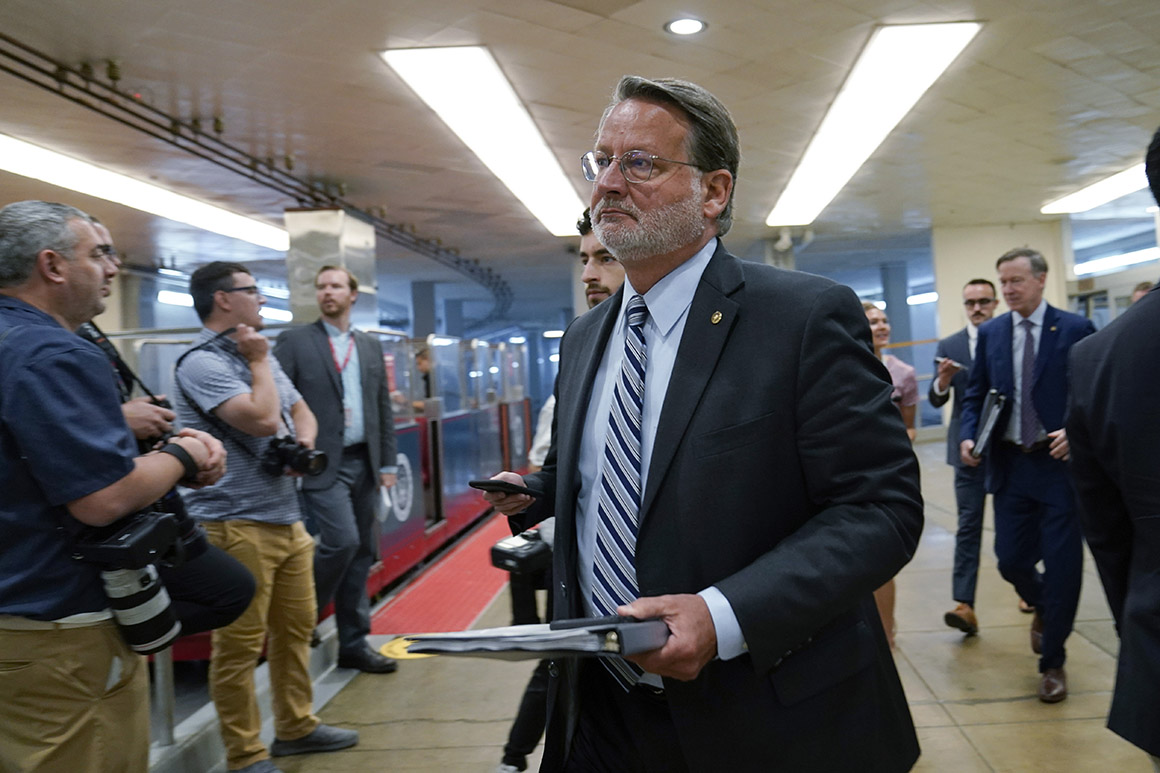 “One of the things I like to say to the companies is … ‘If you’re willing to do it yourself, then why are you opposed to putting it into law?” said Sen. Amy Klobuchar (D-Minn.), the chair of the Senate Judiciary antitrust subcommittee.

K. Dane Snowden, the CEO of the Internet Association, said he doesn’t think Silicon Valley gets enough “credit.” He said policymakers (and the White House) often overlook what the companies are doing “to promote vaccinations and vaccines” for Covid-19 and to remove misinformation related to the pandemic. But later, Klobuchar pointed to a study showing that people are less likely to be vaccinated when they say Facebook is their primary source of news. “Enough is enough,” she said.

2. Lawmakers and agencies are betting big that this is the time to make change. Nearly every panel included mention of policymakers’ bullishness on the legislative vehicles currently moving through Congress with major tech provisions, including the bipartisan infrastructure plan, Democrats’ reconciliation bill and the competition bill spearheaded by Senate Majority Leader Chuck Schumer. They argued bipartisan interest will result in actual fixes to the societal ills surrounding technology.

“We’re making an investment in generational change,” said acting FCC Chair Jessica Rosenworcel, referring to the infrastructure bill, which she said is a “great start” to ensuring 100 percent of U.S. households have access to the internet. Rosenworcel added that she’s open to price regulation and digital redlining proposals in order to address broadband inequality. Klobuchar said she believes that states passing privacy bills this year will “push” the Senate Commerce Committee to act. Rep. Ken Buck (R-Col.) insisted that both Democrats and Republicans can agree that people should not be allowed to engage in online speech that could cause “imminent harm.” Sen. Gary Peters (D-Mich.) pointed out that the competitiveness bill would infuse billions into fixing the chip shortage, which is affecting industries from automobiles to refrigerators.

But those proposals are certain to hit big obstacles. Rosenworcel conceded that she’s a little concerned that the infrastructure bill reduces the emergency broadband subsidy for families from $50 per month to $30. And Klobuchar said the Senate Judiciary Committee, another panel with jurisdiction over tech issues, has a slew of other priorities right now, including voting rights. It’s likely that many of the proposals on the table will be pared back over the course of the next few months of negotiations.

3. Silicon Valley’s lobbyists don’t quite get what D.C. wants. “We get the scapegoating that goes on with tech,” said NetChoice CEO Steve DelBianco, whose group represents companies including Facebook, Amazon and Google. “But what is the signal that we’re supposed to be learning amid all the noise? We just want to understand what it is that D.C. really wants from Silicon Valley.” He said the tech industry is looking for “clearer, broad signals that enjoy consensus support from both parties.” Snowden with the Internet Association sounded a similar tune: “We have to agree on the problem we’re trying to solve,” he said. “We have many proposals that are out there and they compete with one another.”

Charlotte Slaiman, competition policy director at left-leaning advocacy group Public Knowledge, said the message from both parties is actually quite clear — “It is that these companies are too powerful and we are working as quickly as we can to address that problem.” Other activists across the panels had clear demands for Silicon Valley: Bertram Lee, the counsel for media and tech at the civil rights group Leadership Conference, called for a ban on law enforcement’s use of facial recognition technology and a reduction in the online misinformation targeting communities of color.

It’s possible that policymakers, particularly under Democratic control, are being quite clear about what changes they’re hoping for — but Silicon Valley doesn’t want to hear it.

4. It all goes back to the FTC. The FTC was the regulator on everyone’s mind throughout the day. “There’s been a lot of discussion during reconciliation about funding the FTC,” Klobuchar said, referring to the $1 billion infusion for the agency that she is trying to add to the spending bill. “You have bipartisan agreement that these agencies have become shadows of their former selves.”

Panelists disagreed over whether it’s time for a new digital regulator. “I think regulation is best when it’s narrow to a particular subject matter expertise,” said Zach Graves, head of policy at the Lincoln Network. But Slaiman, DelBianco and Graves agreed on one thing — they’re curious to see how the FTC uses its full authority over the next four years.

Thursday’s summit featured some of the key lawmakers and experts working on the future of U.S. tech policy. Here are some of their standout remarks.

— Peters said the future of self-driving vehicles relies on Congress paring back some of the regulations hampering the growth of automation. “Self-driving cars and autonomy is basically the moonshot for AI,” he said. “Private industry can do it. We have to make sure we have a regulatory framework that allows them to get on the street.”

— Adam Kovacevich, the head of the tech advocacy group Chamber of Progress, said Section 230 doesn’t need to be reformed — “it needs a publicist.”

— DelBianco of Netchoice said he’d be open to only one antitrust reform: codifying the consumer welfare standard, the interpretation of antitrust law that has allowed the big tech companies to achieve their current size.

Ahead of the summit, POLITICO brought experts in for roundtables on knotty tech policy issues. Here’s a glimpse of the conversations.

— Anticipating the future of AI: A Biden administration official, Capitol Hill staffer and some of the country’s top AI experts gathered at POLITICO’s AI roundtable event on Tuesday ahead of the summit to discuss what the government should prioritize when it comes to regulating complex technologies like facial recognition and automated hiring software. There was a consensus that the National Institute of Standards and Technology can lead the way by defining what artificial intelligence means in the first place. “There’s so many terms thrown around under this broad umbrella of trustworthiness for AI,” said a Capitol Hill staffer. “There’s not actually an agreement even on the definitions for all those terms.” And that’s where NIST could step in.

— What’s really happening with privacy: POLITICO’s privacy roundtable focused on what is happening in the absence of federal privacy legislation, and what’s needed to get a deal done in Congress. Alexandra S. Levine, who moderated the discussion, learned that the House Energy and Commerce privacy roundtables convened by Rep. Jan Schakowsky are ongoing, with the final four sessions slated to happen in the coming weeks. The panels have examined what else needs to be incorporated into a federal privacy framework — like anti-discimnation and civil rights language, which has generally not been front-and-center in past negotiations — before lawmakers can turn to long-standing sticking points like preemption and private right of action. There are no hearings on the books yet, but expect “an aggressive next phase” once these conversations wrap up.

— What do you think will move the needle on racial equality and fairness in tech? According to a poll taken during our summit, 25 percent of participants said it’s investing more in STEM education and programs while 16 percent said transparency requirements for data and AI could make the difference. Lee with the Leadership Conference said he disagreed with the results, pointing out that studies show it’s overly simplistic to insist there’s a “pipeline issue” in tech. “This is a hiring problem,” Lee said. He expanded in a Twitter thread after the event.

— What issue has contributed most to the rift between Washington and Silicon Valley? Fifty-nine percent of participants said disinformation and misinformation on social media has been the most important point of division. Thirteen percent said it comes down to privacy and surveillance, while only 5 percent said it’s antitrust reform.

Thanks so much for joining us. If you had a good time thinking about tech policy, subscribe to POLITICO Pro and sign up for one of our leading politics and policy newsletters, including Morning Tech, Global Translations and Future Pulse. See you next year!