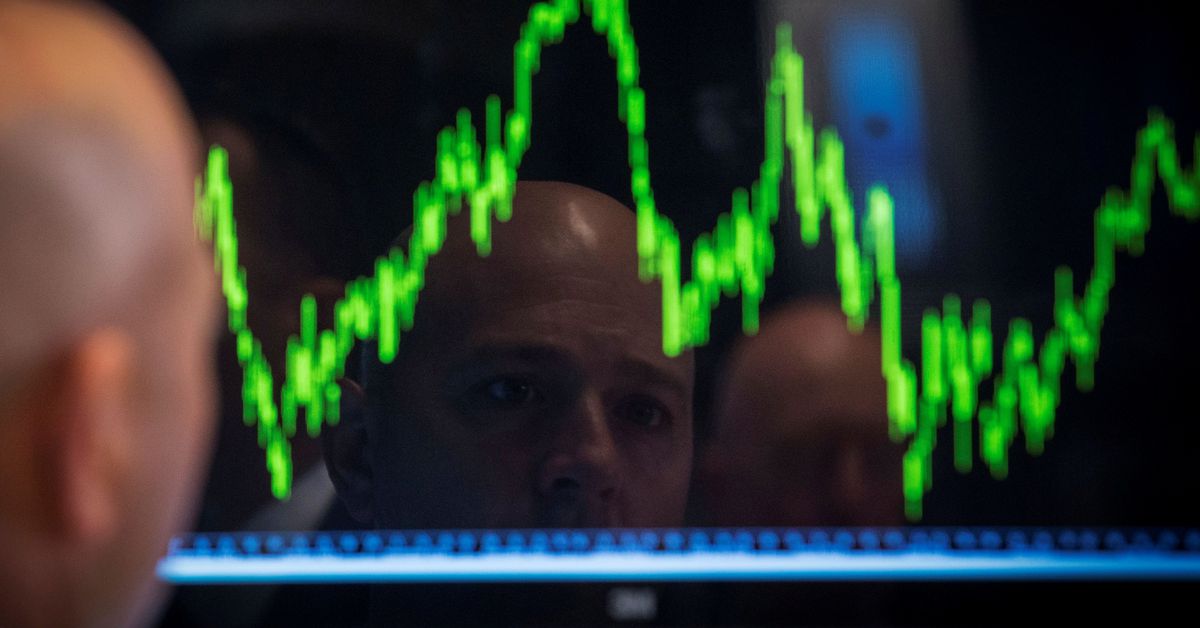 A specialist trader watches his chart while working on the floor of the New York Stock Exchange July 8, 2014. REUTERS/Brendan McDermid/File Photo/File Photo

A rotation out of growth and technology stocks and a recent slide in shares of Tesla Inc (TSLA.O) are weighing on the performance of ARK Innovation (ARKK.P), the flagship exchange-traded fund managed by star stock picker Cathie Wood that bested all other U.S. equity funds in 2020.

The $23.1 billion fund posted a gain of less than 1% last month, a showing nearly 3 percentage points behind the average fund in its category, according to Morningstar data. For the year to date, the fund is down 9%, a performance that puts it in the bottom 100th percentile in Morningstar’s category of 543 mid-cap growth funds. The S&P 500 (.SPX) is up 10.9% over the same time.

Among the factors denting the fund is a rally in shares of financials, energy firms and other companies that stand to benefit from a powerful U.S. economic rebound that has made the growth and tech stocks that dominated last year less alluring to some investors. The Russell 1000 Value index (.RLV), for example, is up nearly 15.8% for the year to date, while the Russell 1000 Growth index (.RLG) is up 5.5% over the same time.

Shares of Tesla, which make up 10.5% of the fund and are its biggest holding, are down 4.5% since the start of the year, contributing to the fund’s slide. Virtual healthcare company Teladoc Health Inc (TDOC.N), the fund’s second-largest holding, has seen its shares fall nearly 21% over the same time.

“The market has rotated away from the fund’s favored growth stocks toward more economically sensitive segments of the market,” said Todd Rosenbluth, head of ETF and mutual fund research at CFRA. “We think if underperformance continues longer, some investors will become frustrated and seek an alternative.”

More recently, growth and technology stocks have sold off over the last few days, a move investors have pinned on everything from profit-taking to worries that the U.S. economic rebound will peak in coming months. read more

Managing investor expectations after last year’s eye-popping performance will be a test for fund manager Wood, who is widely seen as one of the most bullish investors on Wall Street in companies such as Tesla and the cryptocurrency bitcoin. She became a favorite of retail investors as technology and growth stocks surged during the pandemic last year.

ARK did not respond to a request to comment for this story.

The fund gained 152.8% in 2020, the best performance among any actively managed U.S. equity fund tracked by Morningstar.

Of the fund’s 10-largest holdings, only one – payment company Square Inc (SQ.N) – is up for the year to date.

“We are in a scenario now that is quite different than it was the year before, and as we see the reopening increase and the pandemic eases, the performance of growth names is going to be more dictated by the Fed” and its interest rate policies than by the economic recovery, said Quincy Krosby, chief market strategist at Prudential Financial.

The slowing performance of the fund could also focus more investor attention on its strategy of taking large bets on a handful of companies, a style that may make it “ill-prepared to grapple with a major plot twist,” noted Robby Greengold, a strategist on Morningstar’s U.S. equities team.

Overall, funds such as ARK Innovation that outperformed in one year do not tend to outperform in the following year, according to a 2020 study led by James Choi, a professor at the Yale School of Management.

“The disappearance of significant performance persistence is due to lower returns to favorable styles, as well as less favorable style tilts and increased style-adjusted underperformance by past winning funds,” the study noted.