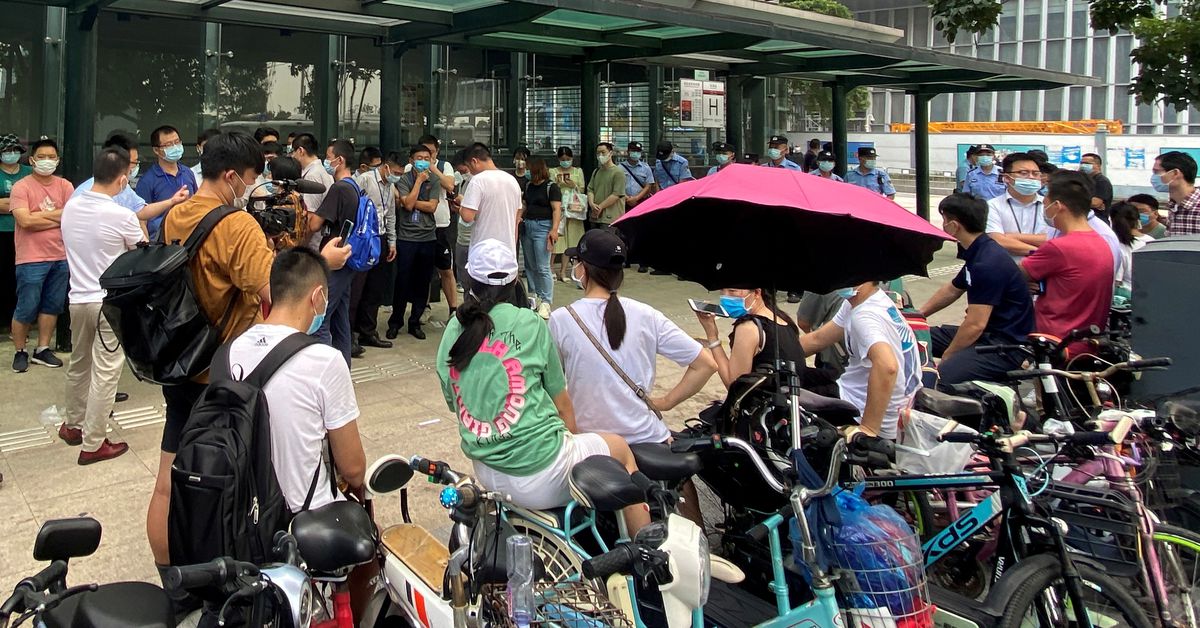 SHENZHEN, China, Sept 16 (Reuters) – Wu Lei says his small construction company in central China has accepted commercial paper from property developer Evergrande (3333.HK) as payment for two years but with that paper’s value now in doubt, his firm is on the verge of collapse.

China Evergrande Group, saddled with more than $300 billion in total liabilities equivalent to 2% of China’s GDP, is in the throes of a liquidity crisis that has it scrambling to raise funds to pay its many lenders and suppliers.

Wu, 35, was one of around a hundred protesters who descended on the headquarters of the country’s No. 2 real estate developer in Shenzhen this week desperately seeking assurances of payment.

“We were working for Evergrande, so our suppliers trusted us with the materials without us paying upfront. Now they’re suing me, courts have frozen my property and I’ve sold my car. And I still have employees who need to be paid,” he said.

The plight of Wu and many others like him has thrown a spotlight on the extensive use of commercial paper in China’s property sector. Developers favour it as they prefer to not pay upfront and because it doesn’t count as interest-bearing debt. The paper promises contractors and suppliers payment on a future fixed date, usually within one year.

Owed 500,000 yuan ($78,000) with another 2 million yuan due in March, Wu has now gone back to his hometown of Kaifeng in Henan province to pursue his claims in court but is worried it may take months to settle.

Evergrande says it is working hard to repay investors in its wealth management products and is in talks with banks to roll over loans, but has not mentioned smaller suppliers and contractors. Financial markets, meanwhile, have priced in likely defaults on its bond payments and expectations are high that its assets will have to be restructured.

It’s not clear just how much commercial paper Evergrande as a group has issued, but its flagship unit Hengda Real Estate Group Co Ltd disclosed some $32 billion worth as of end-2020.

Despite its massive debt load, Evergrande’s name had been held in high regard in ordinary business circles until late last year and its commercial paper was even traded in industries not related to construction.

An owner of a small marketing and consultancy business from one of the poorest counties in Guizhou province said he had accepted Evergrande commercial paper from a client and was waiting on 1.5 million yuan in payment that was now two months overdue.

“I feel depressed, and sorry for my family, having to accompany me in a life in debt,” he said. He declined to give his name, citing rumours of physical threats being made against protesters.

While protesters numbered around a hundred on Monday, numbers had dwindled to two dozen by Thursday, with many losing hope or running out of money.

One protester who gave only his surname Zhang left for Guangzhou on Wednesday after hearing of rumours the company would issue an announcement from there.

“But I think they might just be finding ways to split us up by dragging us all over the place,” he said.

At least two protesters were arrested on Thursday, but others were digging in, sharing links in protester chat groups for cheap yoga mats to serve as makeshift bedding while sleeping rough.

“I’m reduced to sleeping on the streets and eating whatever I can get. I can’t afford to leave Shenzhen even if I wanted to,” said one shop owner from Jiangsu province.