Asian-American tech leaders rally against wave of hatred: ‘We don’t deserve to live in fear in our own country’ – MarketWatch 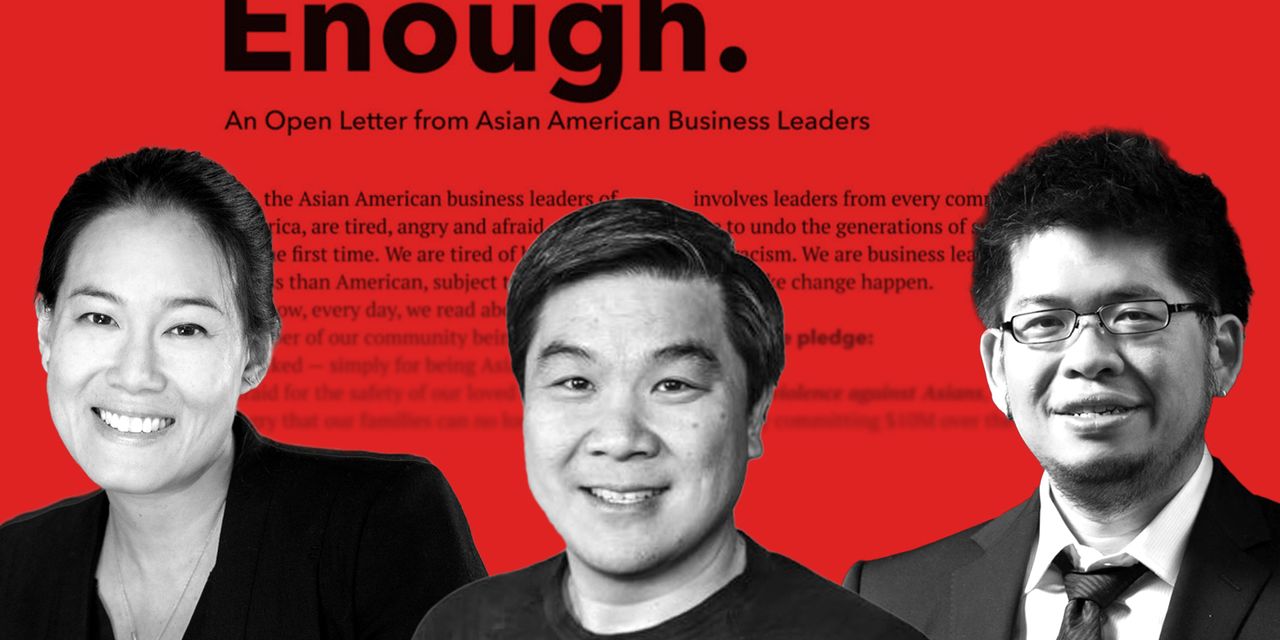 Debby Soo was in a grocery store in Stratham, N.H., last weekend when she realized she didn’t have her credit card.

“So I was trying to use Apple AAPL, Pay, then a man behind me in line said ‘you don’t belong here,’” the chief executive of Booking Holdings Inc.’s BKNG, OpenTable told MarketWatch on Monday. “I said ‘I do belong here. I’m trying to pay.’ I was flustered and uncomfortable. I couldn’t tell if he was telling me I didn’t belong because I was taking an extra 10 seconds to pay or if it was something else.”

Soo, who was born and raised in the U.S., said she is well aware of the long history of anti-Asian sentiment in this country that goes back to before the Chinese Exclusion Act of 1882. Besides her own brush with hate, she said her cousin was on the Embarcadero in San Francisco when “someone screamed at her to get out of the city.”

“Knowing about it is different than experiencing it,” she said.

Soo is among many Asian-American executives and business leaders who have raised more than $20 million and counting to combat the growing instances of anti-Asian hate and violence amid the coronavirus pandemic. The efforts are an unprecedented public show of solidarity from a group of leaders who were mostly brought up to avoid calling attention to themselves.

“We in the Asian community must confront the cultural norms of our upbringing of compliance and conformity,” Slack Technologies Inc. WORK, Chief Financial Officer Allen Shim said in a statement to MarketWatch.

By at least one count, Asians and Asian Americans comprise the majority of Silicon Valley’s tech industry: In 2019, those from Asian countries made up 56.5% of tech workers with bachelor’s degrees in Santa Clara and San Mateo counties, according to Joint Venture Silicon Valley’s latest index.But many Asian-American tech workers struggle to advance in their workplaces, as data shows that Asian Americans are the racial group least likely to be promoted to management in the U.S.

See also: A quarter of Americans have recently witnessed someone blame Asian people for COVID-19

In fact, in some of Silicon Valley’s biggest tech companies, like Facebook Inc. FB, , Alphabet’s GOOGL, Google and Apple Inc. AAPL, , Asian employees either outnumber other ethnic groups or are the second-largest group behind white employees. But their representation at the highest levels of these companies lags the overall representation: Apple’s leadership is 59% white and 27% Asian; Google’s is 65.9% white and 29.6% Asian; and Facebook’s is 63.2% white and 25.4% Asian.

And they traditionally haven’t been vocal. Asians mostly “keep our heads down,” tech entrepreneur and investor Dave Lu said.

Lu is trying to change that by spearheading a $10 million effort that has been the loudest of the campaigns so far. Last week, the group published an open letter from CEOs and co-founders of companies like Zoom Video Communications Inc. ZM, , Google’s YouTube, DoorDash Inc. DASH, and Peloton Interactive Inc. PTON, in the form of a full-page ad in The Wall Street Journal, with a huge headline that said “Enough.”

“We don’t deserve to live in fear in our own country,” the letter reads in part. “The vitriol has made Asians the targets of this blame. Rhetoric matters. The ‘China Virus.’ ‘Kung Flu.’ Those words were an open invitation to hate.”

Lu said the mid-March killings of eight people in Atlanta, six of whom were women of Asian descent, prompted him to speak up and write the letter.

“I was on Bloomberg TV with Emily Chang [last week],” Lu said. “As a startup founder, you dream of this. But I didn’t want to be on for this. I’d rather this wasn’t an issue. I wish my kids and my mom didn’t have to deal with this.”

Lu said it’s important to “make people pay attention. Look at what we have done: employing people, building shareholder value, all the things people care about. But we’re still targets.”

He also mentioned that speaking up against hate isn’t as easy as it seems.

“There were many conversations at companies where people had to fight just to be able to sign the letter before we even published the ad,” he said.

But now many are voicing their fear and discontent and donating to groups like Stop AAPI Hate, which was launched last year by Russell Jeung, head of Asian American Studies at San Francisco State University, along with Chinese for Affirmative Action and the Asian Pacific Policy and Planning Council.

“There are more Asian Americans in boardrooms, in the media and in Hollywood now than before, and they’re using their power to speak up,” Jeung said.

Stop AAPI Hate is seeking to track attacks on Asian Americans. As of March 16, the initiative has received 3,795 reports of anti-Asian incidents since March 19, 2020.

Jeung likens Asian-Americans’ efforts to the Black Lives Matter Movement, which sparked corporations to speak up about police brutality and racism last year. Many of the Asian-American leaders interviewed for this article also mentioned BLM as an inspiration for their activism.

Jeung said the difference between what he calls this pivotal moment for Asian Americans and previous movements like fighting Islamophobia after 9/11 or seeking justice for Vincent Chin, the Chinese engineer who was beaten to death by two white men in Detroit in the 1980s, is that business leaders and others were not as involved during those battles as they are now.

‘It could happen to anyone, no matter how successful you are’

A few of the business leaders who spoke with MarketWatch recounted experiencing racism when they were young, but being either silent about it or avoiding it as they found success at work. Recent incidents of discrimination and violence against their friends, family and people who look like them have resurfaced those feelings.

“The stories that are coming out now take us back to our childhoods,” said Lu, founder of Hyphen Capital and co-founder of startup Pared. “When we were young, we got questions that made us feel not American.”

Jeremy Liew, a partner at Lightspeed Venture Partners in Silicon Valley, thought it could no longer happen to him. He told MarketWatch his job in venture capital “and the associated privilege it entails has largely protected me from the day-to-day racism that I remember from my youth.”

But recently he and his family were in San Luis Obispo, Calif., when his 80-something father-in-law was “verbally abused by a guy who roared behind him in a pickup truck.”

“It could happen to anyone, no matter how successful you are,” said Hans Tung, managing partner of GGV Capital, a venture-capital firm in Menlo Park. He said he and his family have been sticking closer to home to try to avoid the violence that’s been captured on videos and documented in news articles, which he and others attribute to polarizing political rhetoric and the economic impact of the pandemic.

Read: ‘Asian-American businesses are dealing with two viruses’ — Reeling from racist incidents, many are hurting financially during COVID-19

Liew and Lightspeed have joined GGV Capital and fellow VCs to raise $5 million to donate to Asian-American community organizations. That adds to the $10 million committed by the Stand With Asian Americans campaign over the next year to community groups fighting, tracking and trying to educate Americans about anti-Asian racism, and more than $5 million raised by the Support the AAPI Community Fund on GoFundMe since the beginning of March.

Zoom Chief Executive Eric Yuan donated to both efforts. “I feel strongly it is important to lend my voice and stand up with my fellow colleagues, friends, and family who are suffering during this time,” he said in a statement to MarketWatch.

‘Is it worth continuing to fight for something you’re supposed to be entitled to?’

Steve Chen, co-founder of YouTube, moved back to Taiwan with his family a year-and-a-half ago partly because he wanted his sons to feel what it’s like to look like the majority in an Asian country. Although he and his wife had planned to live there for only two years, they’re considering extending their stay, especially now, because he doesn’t want his two sons to deal with the racism he has always known was in the U.S. — because he faced it growing up as an immigrant in the Midwest.

“It was tough,” said Chen, whose family was one of two Asian families in Prospect Heights, Ill., when they moved to the U.S. when he was 8 years old. “You get spit on on the bus every day on the way to school. There were fights and other incidents. I don’t want my kids to go through that experience.”

As a good friend of Lu’s, Chen respects what he’s doing and signed his name to the open letter. But he was frank in his assessment of U.S. race relations: “All this hoping,” he said. “Is it worth continuing to fight for something you’re supposed to be entitled to — equality — under the Constitution?”

Still, Chen said if there is a silver lining to what’s happening in this nation, it’s the banding together of different Asian groups. “It was great to see all the signatures,” he said. “It’s great that it’s all due to one cause.”

A rise in awareness and donations

San Francisco-based Asian Pacific Fund president and executive director Audrey Yamamoto said her organization has seen more than 2,000 donations from around the nation since the deadly shooting in Atlanta. She’s helping steer donations to groups such as Stop AAPI Hate, as well as Asian-American law alliances and more.

“The organizations are also very interested in efforts that have a longer-term impact on bias for Asians and other communities,” Yamamoto said. “So the next generation doesn’t have to go through what we’re going through right now.”

Bing Chen is chairman and co-founder of New York-based Gold House, a three-year-old collective of Asian founders and leaders dedicated to boosting Asian Americans in business, media and beyond. It is among several organizations that are helping decide which community groups receive donations from the Support the AAPI Community Fund, which was launched this month on GoFundMe and has raised more than $5.2 million.

“When I see those women in Atlanta, I see my mother,” Chen said. He noted that he himself is not immune to being fearful nowadays. “I’m 5-foot-10, I bench 300 pounds, and I’m scared. I’ve never looked behind my back so much.”

While Chen acknowledged that immediate relief from the anti-Asian violence is the priority, he is already looking ahead to growing the power of those who might speak up against discrimination in the future.

Then perhaps there will be more executives like OpenTable’s Soo, who are willing to tell their stories and stop being silent.

“Truly to create change and make progress, we need to speak up,” she said. “We have platforms. We are CEOs and senior executives of large companies. We’re integral parts of Americans’ lives. There is power in solidarity and our message.”