The average tech worker in Seattle makes $158,000, a 4.6% increase from last year, according to new data from jobs site Hired.

Demand for tech talent remains at an all-time high, the report said, while the “Great Resignation” is resulting in workers quitting at record rates — 62% expect to look for a new opportunity in the next six months.

In the Seattle region, hometown giants Amazon and Microsoft continue hiring rapidly, with thousands of open roles. Facebook, Google, Apple, and other large corporations are hiring at their Seattle satellite engineering centers. Seattle-based startups are also raising record amounts of venture capital and as a result have more capacity to grow headcount.

Data from the Seattle Startup Hiring Tracker showed 8,518 open roles across 393 startups in Q2 — that’s up from 2,968 open roles in the year-ago quarter.

Adjusted for cost of living, Seattle tech salaries rank fourth among major tech hubs. Making $165,000 in the Bay Area would be the equivalent of making $204,000 in Seattle, according to Hired. 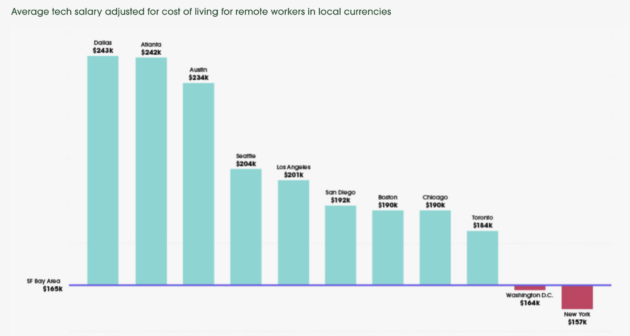 The Hired report detailed the impact of the pandemic on tech salaries and tech worker sentiment for remote work, including commentary on how companies handle remote work compensation. From the report:

“Remote and hybrid work have certainly become the new norm and established ways of working for the long-term. The majority of employees expect and want to have those flexible work options and be compensated fairly for it, meaning there shouldn’t be a pay decrease just because they are no longer in an office. However, there are mixed opinions about how to determine initial remote salaries – almost half of the tech employees surveyed disagree with using the cost of living of the employee’s location as a baseline.”

HR leaders from Zillow Group and Expedia recently discussed these topics on a Future of Work panel at the GeekWire Summit in Seattle. On the issue of salaries being fixed to job type or geography, Zillow Group Chief People Officer Dan Spaulding said Zillow is not lowering people’s salaries when they relocate. “We’ve changed our whole compensation approach,” he said. “Instead of looking at compensation on a city level, we are looking at compensation on a national level.”