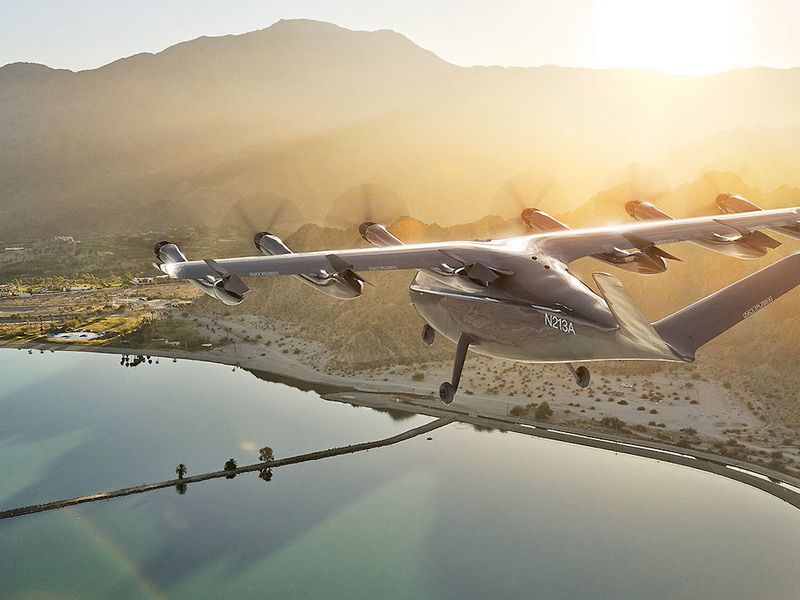 Seven decades after the last aircraft rolled away from the assembly lines, the industrial might displayed at the Willow Run bomber plant remains a point of automotive pride.

At the height of World War II, a B-24 Liberator emerged from the Ford Motor Co. factory in Ypsilanti, Mich., every 63 minutes, a frenetic pace unmatched by America’s aircraft manufacturers of the era. Willow Run produced 8,685 bombers by the end of the war, a number that underscored the power of Ford’s mass-production techniques in aviation applications.

But the lessons haven’t been relegated to history. Now, there are increasing signals the two industries are converging again.

Flying taxis will emerge as a $150 billion industry over the next 15 years, according to business research firm PitchBook. More than 100 startups exist in the urban air mobility space now, and some of the best-funded companies are seeking automotive partners to transform high hopes into tangible fleets.

“Historically, there hasn’t been demand for a high volume of aircraft,” said Adam Goldstein, co-founder and co-CEO of Archer Aviation Inc., an urban air mobility company in Mountain View, Calif., that partnered with Stellantis this year. “Boeing builds hundreds of planes a year, right? Nobody has demanded 50,000 aircraft a year from anybody. But now you have a product that’s affordable to the masses, and there’s a potential demand scenario here for these vehicles.”

Archer aims to start volume manufacturing of its Maker electric vertical takeoff and landing, or eVTOL, aircraft in 2023. Stellantis engineers have collaborated with the startup on cockpit design, and while the specifics are not yet clear, the two companies say Archer will benefit from access to the auto giant’s supply chain and further resources.

Unlike during World War II, it’s no longer only manufacturing prowess and supply chain reliability driving the intertwining of aviation and automotive. Advances in electrification, autonomous systems and lightweight materials plus the rise of ride-sharing networks are spurring changes across transportation modes. In urban air mobility applications, they’re poised to unlock operational, financial and noise-related advantages over current-day helicopters.

General Motors CEO Mary Barra spotlighted the potential for cross-pollination of core technologies last September, when she said the “flexibility” of the company’s new Ultium battery system “opens the doors for many use cases, including aerial mobility.”

Others have made deeper commitments. Toyota Motor Corp. invested $394 million in Joby Aviation in January 2020. As with Stellantis and Archer, the automotive veteran and air mobility startup are working together on vehicle development and manufacturing plans.

Last year, Hyundai Motor Group started its own urban air mobility division, which is exploring not only flying taxis but also new hubs on the ground to connect passengers traveling via multiple modes.

Archer and Joby are two of three eVTOL companies that have announced plans to go public via mergers with special-purpose acquisition companies so far in 2021, at valuations of $2.7 billion for Archer and $6.6 billion for Joby. A third, German air taxi startup Lilium, has plans for such a merger with Qell Acquisition Corp., a blank-check company led by former GM executive Barry Engle.

“An intermodal offering is the future of mobility,” says Pam Cohn, global COO of Hyundai Urban Air Mobility. “Just playing in one of the different modes, or just playing on the ground, isn’t necessarily going to be the best solution for many cities, and it also leaves a lot of value on the table for auto players that could provide a more holistic offering.”

Such value represents an opportunity for traditional automakers. Even with sales of personally owned vehicles remaining robust, mobility has expanded in recent years to include ride-hailing, scooters and now aerial transport, which investors have recognized with particular fervor. They pumped $3.8 billion into passenger air mobility in the first quarter of 2021, according to PitchBook research.

“Transportation problems cannot be solved with cars alone,” said Asad Hussain, senior analyst of emerging tech at PitchBook. “Even with autonomous cars, we still have congestion, and cities are requiring a shift to multimodal that needs to happen.”

Nowhere is that more apparent than in Los Angeles, whose ribbons of highway are known for their snarled traffic. The city has the two most congested roads in the country, according to real-time traffic analytics company Inrix, which says congestion cost Los Angeles $8.2 billion in 2019.

Attempts to eradicate traffic jams include an aggressive push on air mobility. In December, city officials unveiled a first-of-its-kind initiative to lay policy, infrastructure and consumer education groundwork that could lead to the arrival of electric aircraft over the city by 2023. Archer and Hyundai are among the companies working with the city to pioneer service.

“When you see what’s happened when they add extra lanes on highways, the latent demand instantly sucks it up,” Archer’s Goldstein said. “In the air, the beauty is you don’t have to build anything.”

In February, Archer received a $1 billion order for aircraft from United Airlines. Working together, the companies will explore how passengers might use regional transportation provided by Archer to reach Los Angeles International Airport, where they’d then board United flights to other cities.

It’s a similar scenario to the one global consulting firm Gartner found unsettling in a 2017 report titled “Flying Autonomous Vehicles: The Next Big Thing That Isn’t.” Analysts posited that autonomous aerial mobility would likely serve society’s elite while everyone else is left behind in a noisy wake on still-congested roads. Further, it projected that engineering and regulatory hurdles would hinder air mobility adoption.

Autonomy remains a far-off development. Most eVTOL companies anticipate human pilots will remain in control for the foreseeable future. But Goldstein says the other technology challenges are solved and that Archer is working closely with the Federal Aviation Administration to make certain its product stays on track to receive its type certificate, an approval that ensures new aircraft designs and components meet airworthiness standards.

“It’s not a technology thing; it’s a time thing now,” he said. “The most important thing is consumer acceptance.”

Electrification may alleviate some of those concerns. Forget the whump-whump-whump of helicopters. Electric aircraft promise to be quiet enough to allow conversations among passengers and to not annoy people on the ground.

Driven by billions in investment, batteries have made substantial advances in the watt-hours enabled per kilogram, one reason financial firm Morgan Stanley said in January that urban air mobility will be commercialized “faster than we originally anticipated.”

But in batteries specifically, and transportation technology generally, differences between automotive grade and aviation grade remain a potential problem that could slow synergies between the two industries.

Indeed, PitchBook’s report on urban air mobility highlights the cautionary tale of Mitsubishi’s difficulty in meeting aerospace requirements in its SpaceJet project, which did not achieve certification despite billions in investments. But the allure of high-volume manufacturing at low costs remains.

“Automotive players know how to crack the code on affordability,” Hyundai’s Cohn said. “That’s something I’ve watched a lot of aerospace players try to do and really struggle with over the last couple of decades.”

If there’s a convergence of underlying technology between aviation and automotive, there may be an emotional connection as well. Archer didn’t seek an aircraft veteran to lead its design efforts — it hired Mazda’s Julien Montousse to create vehicles that elicit visceral reactions from passengers. The company does not want to make merely a people-moving pod. It wants its product to be the aviation equivalent of the innovative electric pickups and SUVs currently proliferating across the auto industry.

“When I first saw those, the first thought I had was, ‘You could put a surfboard in there,’ ” Goldstein said. “I’ve never surfed, but that was the emotional reaction I had. It’s the same thing for us. We don’t want to be thought of as a way to get to the airport faster. We want them to think it’s a way to go explore the world. That’s what strikes a chord with people.”