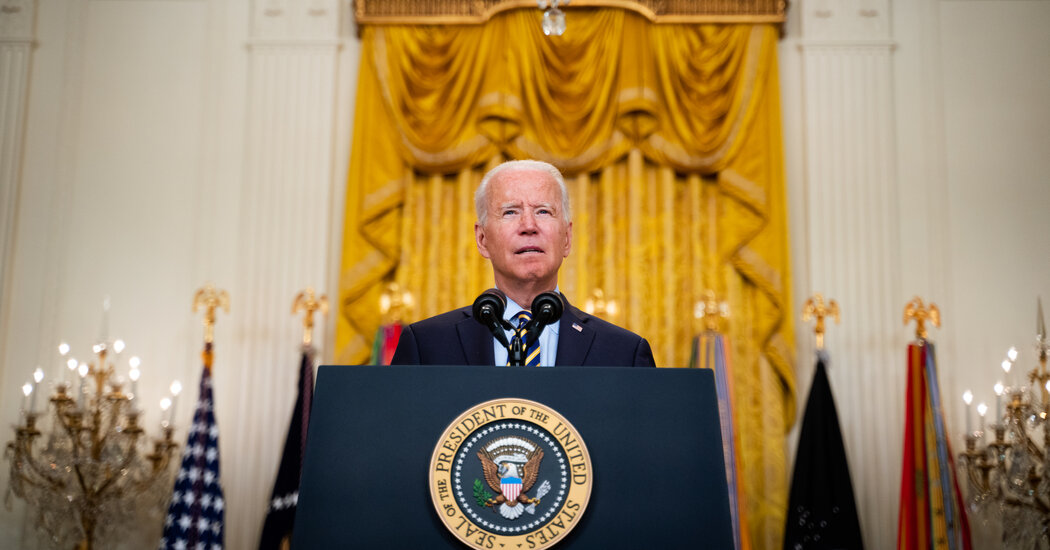 WASHINGTON — President Biden signed a sweeping executive order on Friday aimed at spurring competition across the economy, encouraging federal agencies to take a wide range of actions, including more closely scrutinizing the tech industry, cracking down on high fees charged by sea shippers and allowing hearing aids to be sold over the counter.

“What we’ve seen over the past few decades is less competition, and more concentration that holds our economy back,” Mr. Biden said in the White House on Friday, shortly before signing the order, citing the agriculture, tech and pharmaceutical industries. “Rather than competing for consumers, they are consuming their competitors. Rather than competing for workers, they’re finding ways to gain the upper hand on labor.”

The order reflects the administration’s growing embrace of warnings by some economists that declining competition is hobbling the economy’s vitality, raising prices and reducing choices for consumers in key areas, while dampening pay and restricting freedom to change jobs for workers. Progressive groups celebrated it, while some business groups criticized it harshly.

But Mr. Biden may find challenges in addressing that competition decline across diverse sectors of the economy — including Silicon Valley, Wall Street, chain restaurants and large hospital networks — solely through executive action. Experts warn that in many areas, the president will need to work with Congress to change federal laws if he hopes to have more success than former President Donald J. Trump, who also issued competition-focused executive orders and saw limited results from them.

In interviews this week, senior administration officials acknowledged the limitations of executive authority, but said the order chose actions, like directing federal regulators to take steps to boost competition in several areas, that had the best chance of success in driving change across the economy.

The order includes 72 provisions in total stretching across disparate sectors of the economy. One part of the order will tell the federal agencies that approve mergers that they should update their guidance for vetting deals to better capture Silicon Valley’s business models. Another asks the Federal Communications Commission to reinstate net neutrality rules for broadband providers. Yet another asks the Federal Trade Commission to stop manufacturers from blocking farmers from repairing their tractors on their own.

Other parts will target health care at several levels. The order will support states and tribal governments in importing lower-cost prescription drugs from Canada, push for regulations issued this year to allow hearing aides to be sold over the counter and ask the F.T.C. and the Justice Department to more stringently scrutinize hospital mergers to ensure patients are not harmed by them.

Another focus are the companies that move people and goods around the world. The order encourages new rules governing airline fees, for example. The airline industry consolidated substantially in the 2000s and early 2010s, with a series of mergers and acquisitions creating four large carriers who now serve almost two-thirds of all U.S. passengers. The order also asks the Federal Maritime Commission, an independent agency, to aggressively enforce the law against companies that charge exporters high prices to transport their products by sea.

The order also has numerous parts that the White House says will benefit workers. It encourages the F.T.C. to ban or limit noncompete agreements, which employers have increasingly used in recent years to try to inhibit their workers’ ability to quit for a better job. It encourages the commission to also ban “unnecessary” occupational licensing restrictions, which can restrict workers’ ability to find new work, especially across state lines. And it encourages both the commission and the Justice Department to further restrict the ability of employers to share information on worker pay in ways that might amount to collusion.

More broadly, the executive order encourages antitrust regulators to consider the ways that mergers might contribute to monopsonies, or industries in which workers have few choices of where to work and therefore lack leverage to negotiate higher wages or better benefits.

The White House Council of Economic Advisers noted several examples of such industries in an accompanying research brief on Friday, including beef packing and airlines, which are each dominated by four large companies.

It will create a White House Competition Council, led by Brian Deese, the director of the National Economic Council, which will “coordinate the federal government’s response to the rising power of large corporations in the economy,” administration officials said in a news release.

The order is a victory for the progressive lawmakers and academics who say government regulators failed to check the growth of corporate America for decades, instead aligning themselves with a conservative view that set a high standard for when the government should block mergers or break up monopolies. They have also criticized the Obama administration for failing to properly police industry consolidation, particularly in Silicon Valley.

They say that policymakers need to aggressively enforce antitrust laws and possibly rewrite them entirely. Without drastic action, they argue, consumers will have less choice, suppliers of bigger companies will get squeezed and giant corporations will only grow larger.

Senator Amy Klobuchar, the Minnesota Democrat who leads the Senate Judiciary’s antitrust subcommittee and has been critical of the concentration of power in the corporate world, called the order “groundbreaking.”

David Segal, the executive director of the group Demand Progress, said in a statement that the order represented “a wish list progressives and other pro-competition advocates have been promoting for years, and in some cases, decades.”

A leading business lobbying group in Washington, the U.S. Chamber of Commerce, panned the order. Neil Bradley, the group’s executive vice president and chief policy officer, said the order was “built on the flawed belief that our economy is over concentrated, stagnant, and fails to generate private investment needed to spur innovation. Such broadsided claims are out of touch with reality, as our economy has proven to be resilient and remains the envy of the world.”

Mr. Biden has already put some vocal critics of corporate power in leadership positions. In the White House, he appointed Tim Wu, a Columbia University law professor and outspoken proponent of breaking up companies like Facebook, as a special adviser on competition. He named Lina Khan as chair of the Federal Trade Commission. Ms. Khan worked on a House antitrust investigation into Amazon, Apple, Facebook and Google and earlier in her career wrote critically about concentration in other industries, like candy manufacturing and agriculture.

But Mr. Biden has also not yet nominated someone to lead the Department of Justice’s antitrust division, a key position in determining the administration’s position on competition issues.

Federal courts have also taken a conservative approach to antitrust law in recent decades, underscoring how difficult it may be for the order to have any lasting effect. Last month, a judge threw out an F.T.C. lawsuit that argued Facebook had violated antitrust laws in buying smaller competitors Instagram and WhatsApp, although the judge gave the agency 30 days to refile the case.

William J. Baer, who led the antitrust division of the Justice Department during the Obama administration, said that courts often give “careful consideration” to the guidance on mergers that the executive order seeks to update. But he noted that as the courts have become more conservative on antitrust questions generally, they have been more likely to reject challenges to deals.

“There’s a headwind there that may or may not be overcome,” he said.

House lawmakers have advanced a handful of proposals to strengthen the agencies’ hands when it comes to Big Tech, but those bills are expected to face fierce resistance. Many of the measures in the executive order don’t necessarily need an act of Congress to broaden the agencies’ abilities. In many cases, regulators have held back on enforcing existing laws and creating new rules, people familiar with the White House’s thinking said.

One of the targets of the executive order are mergers where big tech companies buy small companies that could become fierce competitors, snuffing out a rival before it gets off the ground. The directives encourage the agencies to revisit the guidelines they use to assess proposed deals, including when a company is buying a young competitor or a major cache of data that could help it dominate.

The order will also ask the F.C.C. to adopt new restrictions on the practices of broadband internet providers like Comcast, AT&T and Verizon. Activists have long said consumers have too few choices, and pay too much money, for internet service.

Mr. Biden will also encourage the F.C.C. to reinstitute so-called net neutrality rules that barred internet providers from blocking certain content, slowing down its delivery or letting clients pay more to have their content delivered faster. The agency adopted the rules during the Obama administration and then rolled them back under President Donald J. Trump.

Mr. Baer, the former Justice Department official, said the while the Obama administration had begun to focus on competition policy from the White House in its waning days, Mr. Biden had the runway to make it a major priority.

“He has the time to see it through,” said Mr. Baer.