Big Tech and the Taliban – The New York Times 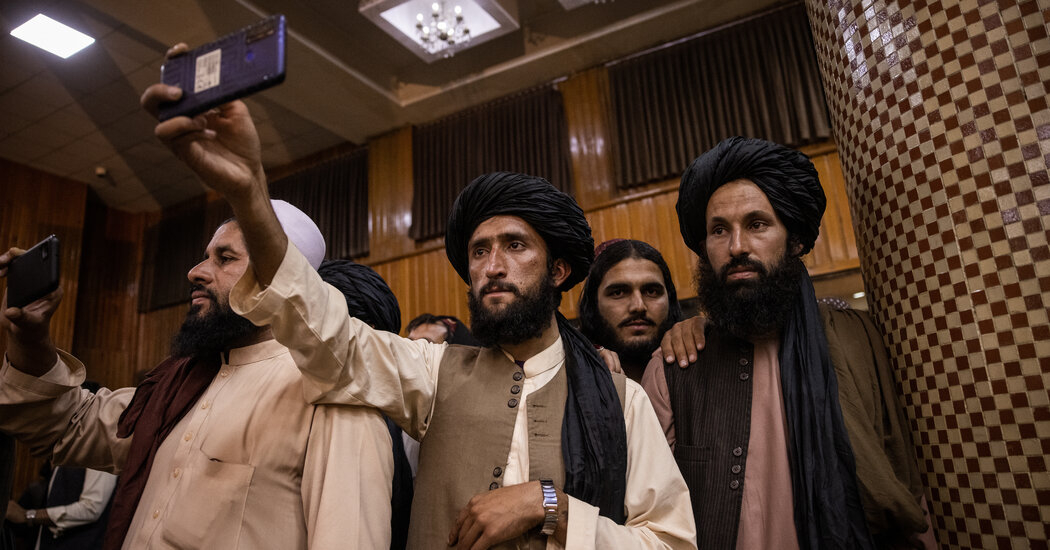 Social media platforms were caught as much by surprise by the Taliban’s takeover of Afghanistan as Western leaders were. Accounts and content linked to the group are rapidly multiplying, as governments around the world decide whether to officially recognize the Taliban as Afghanistan’s rulers.

U.S. tech giants like Facebook, Twitter and YouTube, which have largely designated the Taliban a terrorist organization, have been put in a tricky position as the Taliban try to establish their authority and legitimize their rule online.

Aren’t the Taliban already banned from social networks? Mostly, yes. But emboldened by on-the-ground gains, newly created pro-Taliban accounts are openly defying the bans. An analysis by The Times shows that more than 100 new pro-Taliban accounts and pages have been created since last week, while dozens of accounts that were dormant for months or even years on social networks popped back up in recent days.

Facebook has activated an emergency response team to assess the Taliban’s use of its products, and representatives from YouTube said pro-Taliban accounts were being removed as they are identified. In the meantime, the accounts are working in concert to post videos, images and slogans that rack up hundreds of thousands of views, likes and shares.

Identifying Taliban-linked accounts isn’t easy. Taliban supporters favor end-to-end encrypted messaging apps like Telegram and the Facebook-owned WhatsApp to spread their propaganda. Because companies can’t read users’ chats, the apps have to identify and ban pro-Taliban accounts in other ways. WhatsApp said it had shut down a Taliban hotline in Kabul, which the group advertised when it took over the city. The company can scan group names, descriptions and profile pictures in the app in its attempts to stop the Taliban from using it.

The Taliban are getting savvier with their social media strategy. Intriguingly, the group’s tactics on social media “show such a high degree of skill,” wrote The Washington Post, “that analysts believe at least one public relations firm is advising the Taliban on how to push key themes, amplify messages across platforms and create potentially viral images and video snippets.”

To keep their official online presence, the Taliban have been bending tech companies’ guidelines to their advantage. Twitter said this week that it prohibited glorification of violence on its platform. Widely followed accounts for various Taliban spokesmen have steered clear of posts that espouse hate speech or incite violence, allowing them to remain active.

Why not simply remove all pro-Taliban content? Part of the holdup is that tech firms are waiting for a cue from the U.S. government. Employees at YouTube and Twitter said they had been trying to interpret diplomatic cables on whether the U.S. would form a de facto relationship with the Taliban and recognize them as Afghanistan’s new rulers. That would change the calculus on what to permit on their platforms. While world leaders waver, big tech companies are forced to act as diplomats, whether they like it or not.

The Biden administration steps up vaccination efforts. The White House is recommending booster shots for most vaccinated adults and is pressuring nursing homes to vaccinate their staff or lose Medicare and Medicaid funding. Meanwhile, in New York City, a group of restaurants has sued to stop the city’s vaccine mandates for certain indoor activities.

The I.M.F. blocks Afghanistan’s access to $460 million to bolster its currency. The move could freeze banks around the world from doing business with the country, giving the I.M.F. and the U.S., its largest shareholder, leverage in negotiating with the Taliban.

Fed officials think the economy is strong enough to reduce its support (eventually). The minutes of the central bank’s most recent meeting show a growing consensus to taper its bond purchases, a key step toward restoring a more normal monetary policy after the pandemic. Meanwhile, Goldman Sachs cut its U.S. economic growth forecast, saying the effect of the spread of the Delta variant of the coronavirus is “somewhat larger” than expected.

The pandemic sets off a start-up boom. A decades-long decline in entrepreneurship reversed itself last year, as Americans filed paperwork to start over four million new businesses, a 24 percent rise from the year before. The increase in “Covid era” companies is on pace to continue this year.

Illumina completes its deal to buy its former spinoff Grail over regulators’ objections. The $7.1 billion health care deal is notable because it closed despite a continuing antitrust review in the U.S. and E.U. A number of other deals have recently been called off as regulators adopt a tougher stance against corporate consolidation.

In its first earnings report as a public company, Robinhood said its latest quarterly revenue more than doubled, to $565 million, but the company still lost money (a big accounting adjustment was a factor).

On its earnings call, executives of the trading app took questions from individual investors using Say Technologies, a shareholder communication platform that Robinhood acquired this month. Here are our favorites — edited for clarity — which ranked fifth, sixth and 16th as voted by shareholders.

The answers: Maybe. We monitor it. This question wasn’t asked.

It’s all about crypto — for now. Robinhood really took off during meme-stock mania, but in the second quarter, the company said that more new accounts were opened to trade cryptocurrencies than stocks. Revenue from clients trading Bitcoin, Dogecoin and others rose to $233 million, from $5 million a year ago. That was worth just over half of Robinhood’s transaction-based revenues for the quarter.

Robinhood’s business model is following customers from one hot investment to another. That’s good while it lasts, but a warning that “seasonal headwinds and lower trading activity” could dampen results in the current quarter hit Robinhood’s shares, which fell more than 10 percent in aftermarket trading.

Understand the Taliban Takeover in Afghanistan

Who are the Taliban? The Taliban arose in 1994 amid the turmoil that came after the withdrawal of Soviet forces from Afghanistan in 1989. They used brutal public punishments, including floggings, amputations and mass executions, to enforce their rules. Here’s more on their origin story and their record as rulers.

Who are the Taliban leaders? These are the top leaders of the Taliban, men who have spent years on the run, in hiding, in jail and dodging American drones. They are emerging now from obscurity, but little is known about them or how they plan to govern.

“Investors want to better understand one of the most critical assets of a company: its people. I’ve asked staff to propose recommendations for the Commission’s consideration on human capital disclosure.”

— Gary Gensler, the S.E.C. chair, on the latest push for companies to report more on environmental, social and governance issues. Human-capital disclosures could include measures like turnover, training, diversity and health, he said. This month, the S.E.C. approved Nasdaq’s proposal to require companies to have at least two diverse board members as a condition of listing.

Regulators have been scrutinizing SPACs more closely in recent months, with the S.E.C. targeting disclosure and accounting practices, while Congress has discussed making banks as liable for their work on SPACs as the stricter rules that apply to traditional I.P.O.s. According to new research by Usha Rodrigues of the University of Georgia School of Law and Mike Stegemoller of Baylor University, there is another urgent issue underlying the blank-check boom to worry about: “empty voting.”

SPAC investors can vote in favor of a merger but redeem their shares before the deal is done. The SPAC structure allows investors to get their money back at the I.P.O. price, plus interest, if they don’t want to keep the shares after the blank-check firm merges with a target company. But even as redemptions are rising, in some cases with large majorities of shareholders pulling their money out, deals are still almost all being approved.

Why? One reason may be because redeeming shareholders — which tend to be institutional investors like hedge funds — can keep the warrants that come with SPAC listings, which are tradable and give them exposure to the merged company despite having redeemed their shares for cash. And for the target company, redemptions deprive it of the money in the SPAC, but outside investment at the time of a deal (known as a PIPE) is usually larger and makes the merger still worth doing.

This is a corporate governance problem. The “ability to vote ‘yes’ and nevertheless jump ship” is worrying, the researchers write, because it is a form of “empty voting.” It creates the impression that early investors in the SPAC are in favor of its chosen merger target even as they sell their shares. Later investors — more likely to be retail investors — may misinterpret this signal.

The solution: If more than 50 percent of the SPAC shareholders ask to redeem their shares, the S.E.C. should prohibit a deal from going ahead, the researchers write.