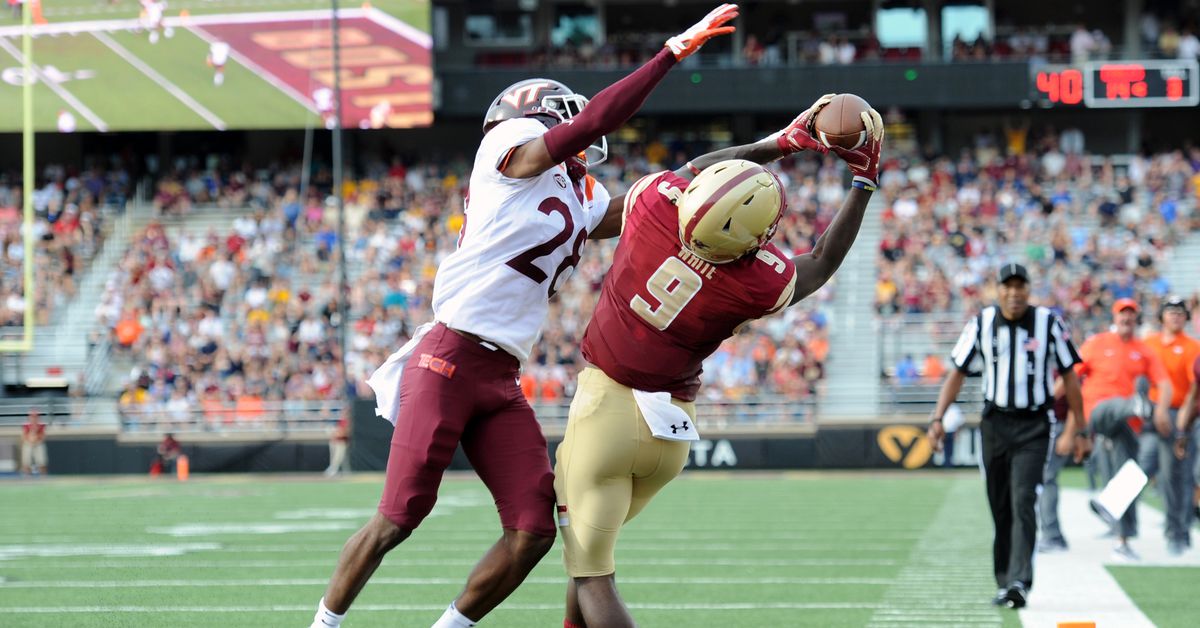 It’s Friday Night Lights on the Heights when BC takes on Virginia Tech. The Hokies are coming off a 5-6 2020 season, but were affected by COVID a bit more than most. The November 5th matchup is already slated for ESPN2 coverage.

Last year’s 40-14 drubbing is so forgotten, the Getty/USA Today image finder on this site refuses to acknowledge it’s existence. Tech QB-RB duo of Hendon Hooker and Khalil Herbert (don’t worry, Herbert’s in the NFL now) ran all over the Eagles (300+ yards). BC simply wore down after making it 17-14 midway through the third quarter. After that, there was no answer for Hooker not to mention the five total turnovers that put the game to rest and then some.

10-19 against VT all-time. The dance with the Hokies has been all over the place. Since 2013, the teams are tied at 4 games apiece. Tech won the last one, BC won the previous two snapping a three-game losing streak. Home or away, it hasn’t really changed much in terms of edge.

Justin Fuente enters his sixth season in charge taking over for Frank Beamer. He won the Coastal in his first year, but has been slightly above average ever since. Coach Bud Foster retired as defensive coordinator last year, so Justin Hamilton will enter his second year leading the unit after an up and down season.

The defense returns seven starters, but it was a unit that struggled last season largely due to circumstances outside of their control. On the line they have solid experience and pose a really good pass rush, adding Clemson DT Jordan Williams. They lose an All-ACC linebacker, but the talent is still available despite the lack of depth. The defensive backfield was quite tumultuous last season after all star Caleb Farley opted out and injuries, COVID, and suspensions forced very green players to suit up. All that experience could come in handy this season, with most players returning and a couple of new pieces. Despite the chaos, they still finished well in pass defense. The new system should be better installed this time around as well.

In the end this seems like it’ll be a similar Virginia Tech team as the past few seasons. They should push to get above .500, but I think the same inconsistencies will still appear. That being said, I think BC will still be a bit behind the eight ball defending against multi-faceted rushing attacks. I know Hafley and co. see the issue and the need for speed, but it still may be a year away from getting to that preferred level. I could see BC being ranked with six or seven wins at this point, and a lot of fanfare heading into the matchup, only to maybe, quite possibly, but hopefully-not-be let down. This is a new era, let me not forget. The offense can absolutely carry any load. No score prediction, but I expect an uncomfortably tight contest. I already can’t wait. Of the ACC slate, this is probably my favorite litmus test. Win or lose, the team just can’t fall flat.