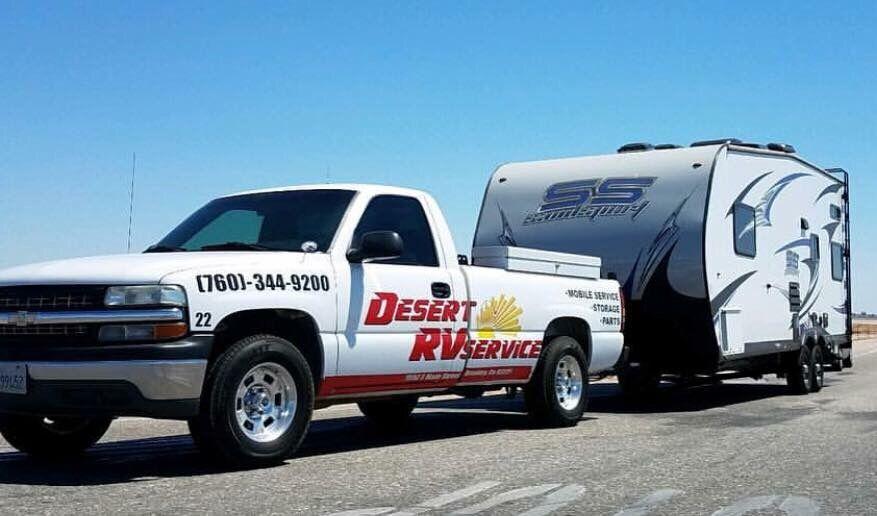 Desert RV in Brawley provides repairs, maintenance and parts for the significant number of recreation vehicles in the area, both locally owned and those that travel to and from the Glamis Dunes and other desert parks, as well as the snowbirds from Canada, and the colder parts of the United States.

The company is owned and operated by Brawley native Joel A. Gonzalez. He started the business, with some help from his parents, in 2009 after an eight-year career as a deputy with the Imperial County Sheriff’s Office.

Starting with only one other employee, the business has grown to now employ 13. In addition to mechanical repairs on RVs, the business has a high volume of body works repairs and upgrades.  Desert RV also installs fifth-wheel hitches in the beds of appropriately engineered power trucks, as well as goosenecks.  Window tinting is also offered for commercial and personal vehicles.

Gonzalez encourages all RV owners to schedule an inspection prior to using the RV if it has been in storage or simply not used for several months. “This simple and inexpensive inspection will allow you to have a safe and positive experience as you hit the roads,” he said.

In late October, just prior to the desert kickoff season, Desert RV holds a customer and vendor appreciation function with a live band, food and a general good time in the parking lot of the business.  “It is a way to bring the community together in a relaxed atmosphere with our employees and their families,” Gonzalez explained.

The annual kickoff event runs well likely because of the Desert RV and the Gonzalez experience in the annual Brawley Chili Cook-Off, which is part the events leading up the Cattle Call Rodeo. Gonzalez estimated he has participated in the event for 13 years, usually placing in the top three and finishing first three times.

Gonzalez is also a car enthusiast. He has belonged to the LaGente Car Club for 22 years. The club, which has been around 42 years, participates in a number local events, including the Cattle Call Parade. It also raises money to support the Brawley boxing gym. The money raised at the club’s events, which feature low riders, hot rods and customized motor bikes, are used to help with equipment purchases and facility maintenance.

Gonzalez’s love for fooling about with old cars, including a 1964 Impala, has dovetailed with his day job. One of Desert RV’s newer business lines is vintage car restoration. This includes a total rebuild of the engine, transmission, major work on the body, repainting and a complete redo of the interior.

To complete the interior work, he has contracted with local talent.  Currently he is working on a 1971 Ford Mustang. Some of that work involved equipment that Desert RV does not have, so in keeping things local, Gonzalez teamed with D & H Body Works, which is just around the corner from his shop. All car restoration is done by appointment only.

Gonzalez is committed to supporting the community. He’s a member of the Elks Lodge, the Hidalgo Society, the Brawley Chamber of Commerce — including six years on the board — and a first-year trustee on the Brawley Union High School District board. In 2018, the Hidalgo Society named Gonzalez the Hispanic of the Year, and and the following year, he was one of three recipients of the Brawley Chamber of Commerce’s Branding Iron Award.

During last year’s wildfire in Niland, which destroyed some 40 homes, Gonzalez and his team provided support. Desert RV is the repair contractor for Imperial Irrigation District’s mobile command center. As part of the emergency response, Gonzalez was contacted to assist in positioning the large IID vehicle. He stayed on the scene through the night, and then, as the need for donations became apparent, Desert RV served as a drop-off point for the gift and delivered them to Niland for a full week. The Brawley American Legion post then volunteered to take over the operation from there.

Gonzalez’s outreach efforts haven’t been limited to the Valley. When the 2018 floods in Texas were so devastating and the local community wanted to help, Desert RV served as a donation center then, too. The employees helped to organize and pack the donations on trailers so that they could safely and efficiently transported to the coast of Texas and the inland communities.

Like many who graduated from Brawley Union High School, Gonzalez is a sports fan and a supporter the various local sports programs.  When his son, Jonathan, was 12, he and three others from Brawley were selected to play in New York in a 12-and-under All Star game. Gonzalez raised the necessary funds for all four to travel and spend a week for the tournament. Jonathan now attends Colorado Mesa College on a baseball scholarship.

Gonzalez also has a daughter, Makayla, and two step-daughters, Savannah and Jocelyn.

Desert RV has served as the opportunity for Gonzalez to provide for his family, grow the business, and support his employees and their families. The company’s success has returned to the community and beyond in ways that could not have been assumed in 2009.