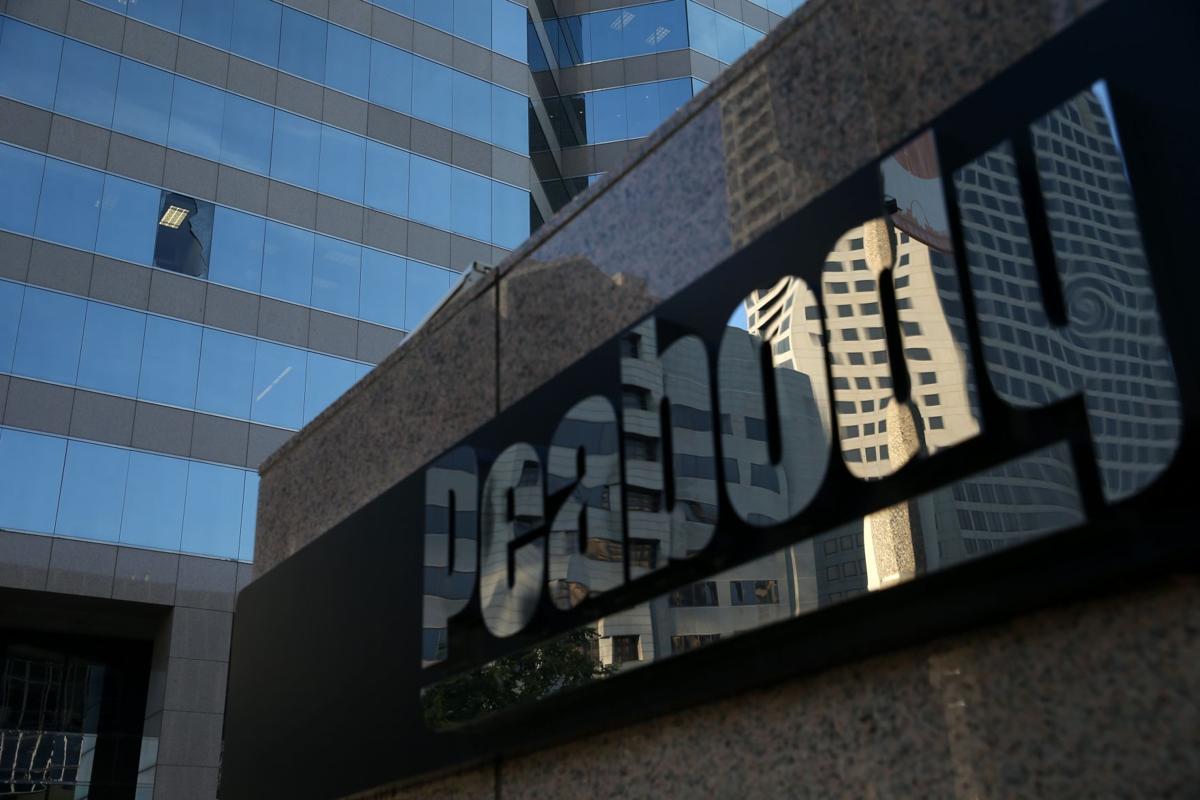 An interior light illuminates a shattered window on Tuesday, Sept. 7, 2021, at Peabody Plaza located at 701 Market Street. An investigation was underway to determine if the damage was caused by gunfire over the Labor Day weekend. Several windows were broken. (Laurie Skrivan, [email protected]) 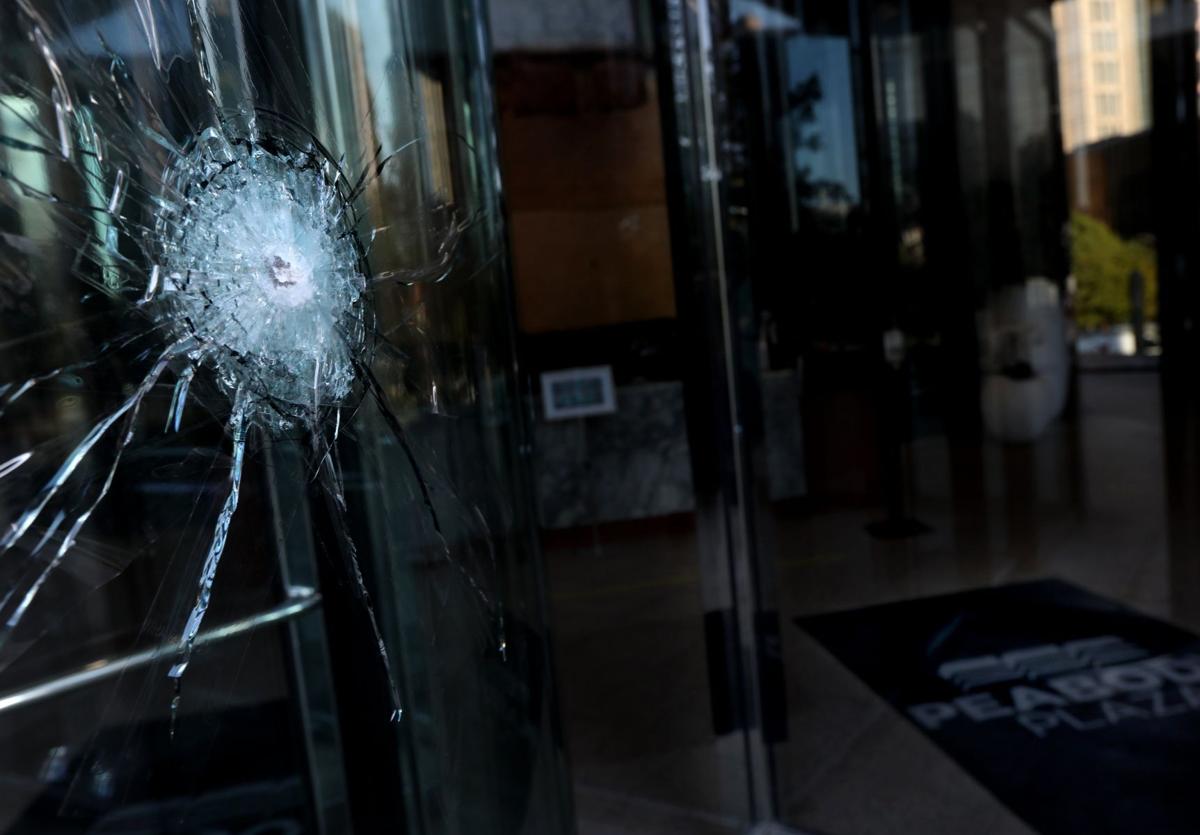 A view of a broken window on Tuesday, Sept. 7, 2021, at Peabody Plaza located at 701 Market Street. An investigation was underway to determine if the damage was caused by gunfire over the Labor Day weekend. Several windows were broken. (Laurie Skrivan, [email protected]) 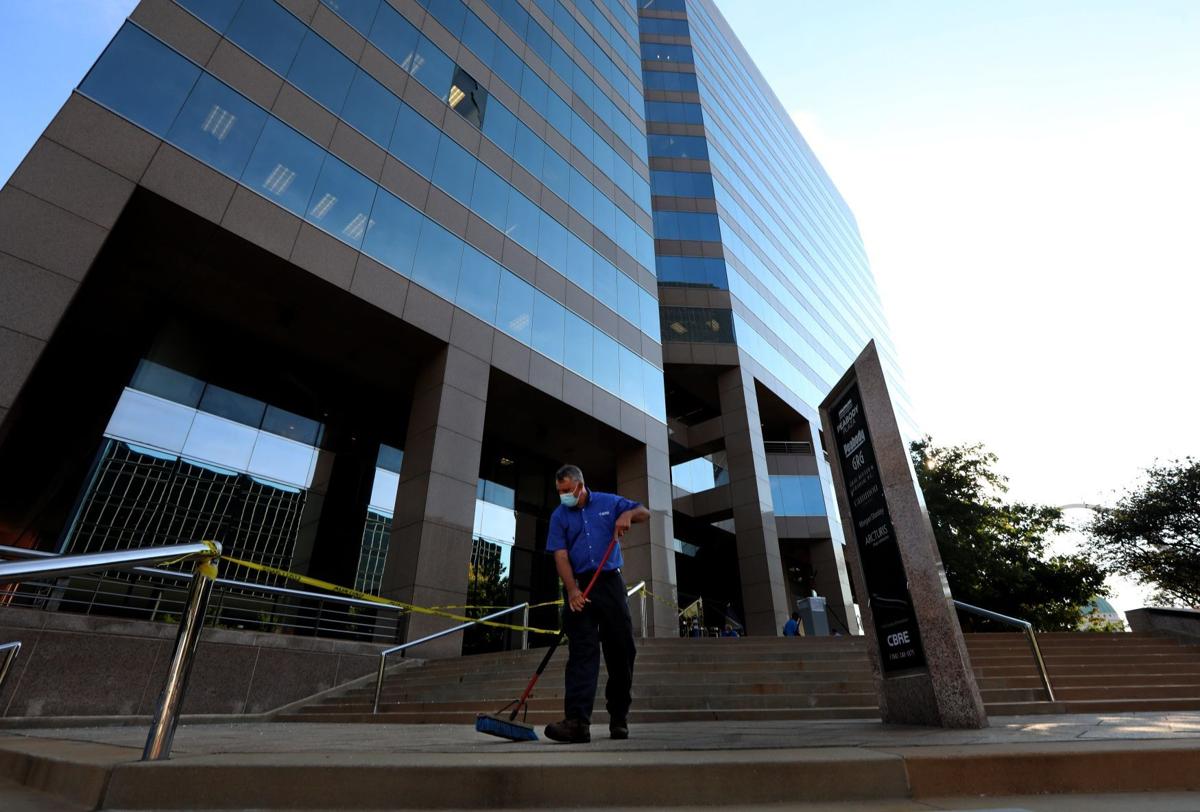 A worker cleans up glass debris from a broken window on Tuesday, Sept. 7, 2021, at Peabody Plaza located at 701 Market Street. An investigation was underway to determine if the damage was caused by gunfire over the Labor Day weekend. Several windows were broken. (Laurie Skrivan, [email protected]) 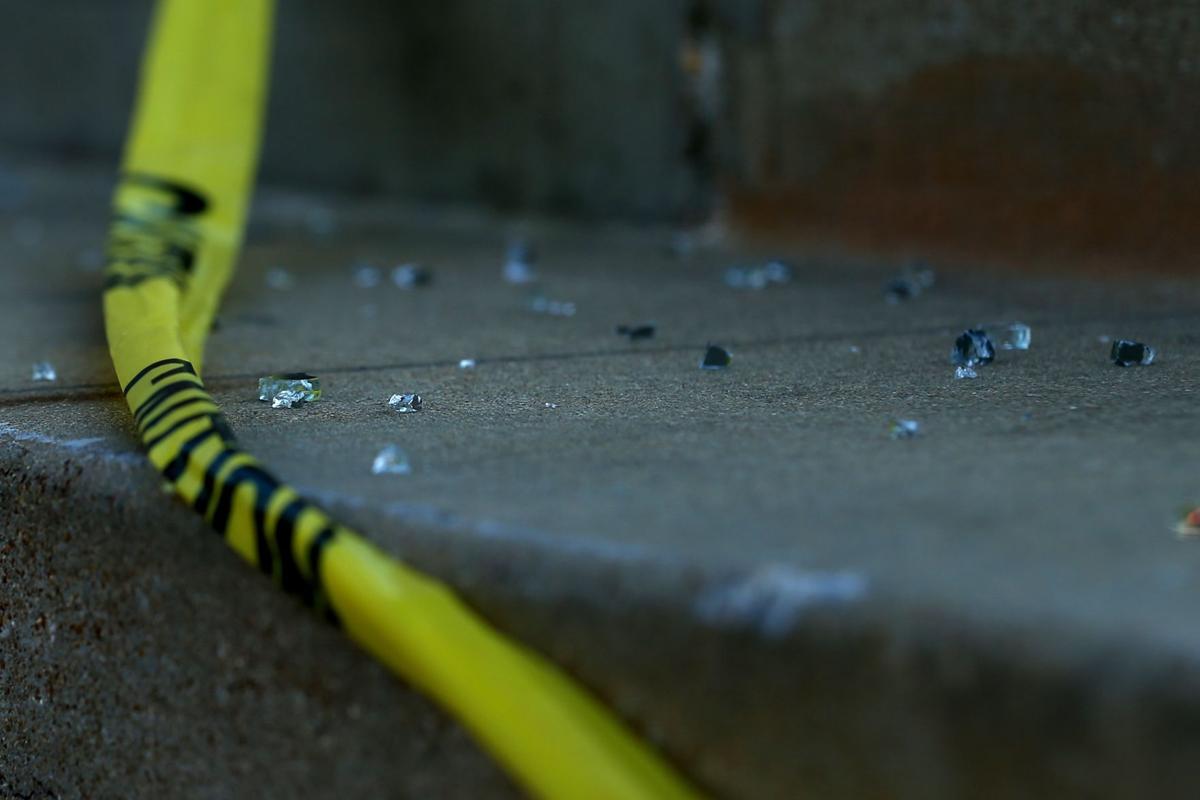 Glass debris lays scatters on the stairs from a shattered window on Tuesday, Sept. 7, 2021, at Peabody Plaza located at 701 Market Street. An investigation was underway to determine if the damage was caused by gunfire over the Labor Day weekend. Several windows were broken. (Laurie Skrivan, [email protected])

ST. LOUIS — Multiple large employers are considering moving their offices out of the downtown business district, city officials said this week, after more than a year of nighttime violence and gunfire that has struck buildings, broken windows and injured and killed people.

Just this summer, windows have been shot out at the Laclede Gas Building, One U.S. Bank Plaza, One Metropolitan Square and Peabody Plaza, said Alderman Jack Coatar, whose ward covers part of downtown.

“I’ve spoken to a number of large downtown employers who have indicated they are going to seriously consider not renewing leases,” Coatar said Wednesday, based on recent conversations. “You want your workforce to be safe.”

The owner of Peabody Plaza contacted the office of Mayor Tishaura O. Jones just this week saying that at least one of its tenants, Peabody Energy — the nation’s largest private coal company and one of downtown’s most prominent headquarters — has considered moving out, her office said, after multiple office windows there were broken by gunfire over the weekend.

“We’re aware of the issues that are going on and how it’s affecting both residents and businesses in the downtown area,” Jones spokesman Nick Dunne said on Tuesday. “We’re evaluating the possibilities for what we can do to step up public safety measures downtown so that we can mitigate instances like these.”

Peabody declined multiple requests seeking comment. The owner of Peabody Plaza also declined to comment. Jones’ office did not elaborate on its plans.

Businesses and residents have complained about downtown’s woes for decades. Concerns have ignited anew during the pandemic, which has further emptied office buildings and entertainment venues. Several groups have pushed in recent months to close bars they deemed unruly, clear a crowded homeless encampment on North Tucker Boulevard, beef up security, and better coordinate regional efforts to boost downtown’s fortunes.

The latest incident occurred Saturday night. Shortly before 10 p.m., police reported hearing multiple shots fired from the 700 block of Market Street, and saw “a large group of juveniles running away.” At the intersection of North Eighth and Chestnut streets, officers found an 18-year-old with a gunshot wound to his leg. At least four Peabody Plaza windows were shot, and one shattered. An investigation into the incident was ongoing.

Just hours later and only yards away, officers responded to another shooting that left three victims, all in their early 20s, hospitalized with gunshot wounds. Police reports said that the victims were standing near their vehicles on Market Street, between North Eighth and Ninth streets, when they heard shots coming from the Citygarden Sculpture Park, directly across the road from Peabody Plaza. Officers encountered “a large, hostile crowd of approximately 100 individuals,” and called for help.

Dan Pistor, a downtown resident of 15 years and a chair of the safety committee for the St. Louis Downtown Neighborhood Association, said that complaints revolve around large groups of young people who gather in Kiener Plaza almost every weekend and that disruptive behavior is reaching “the point where it’s having an economic impact on downtown.”

Brad Waldrop, a commercial broker who owns property on Washington Avenue, criticized what he described as a lack of a unified, widespread effort to keep all of downtown desirable.

“People care more about their islands — like Ballpark Village or Lumiere Place or Union Station — instead of downtown as a whole,” he said.

Waldrop said that he was initially drawn to buy downtown thanks to the allure of its architecture and potential to be a dense, diverse area with lots of people. But now he said his rents have been cut in half since he first bought downtown property around 2005.

Your membership makes our reporting possible.

In 2019, the fourth police district, encompassing downtown, logged 163 calls for shootings into buildings. The next year — one that became record-breaking for the city’s homicide rate — police received 339 calls for such gunfire. This year, so far, there have been 168 such calls.

Dunne, from the mayor’s office, said the issues are not unique to downtown.

“This is not just about downtown. This is something that happens all over the city,” he said. “We just have to make sure we know where and when they are happening and respond to it accordingly.”

The mayor’s office told him solutions are brewing, but hasn’t shared plans with him, he said.

Peabody is committed to downtown for at least two more years: In 2016, the company extended its lease at 701 Market Street through 2023. At the time, Peabody occupied about seven floors of the 16-story building, and employed roughly 380 there — down from a peak of nine floors earlier in the decade, when the company employed about 600 locally.

The company has had a volatile run in the time since. It emerged from bankruptcy in 2018, and earlier this year, announced that it absorbed $1.8 billion in losses in 2020, while cutting 2,000 jobs.

Briar Meads Capital, a New York real estate investment firm, acquired Peabody Plaza in 2020 for $35 million, and has invested in improvements at the 400,000-square-foot building. It has wooed several new tenants, including architecture firm Arcturis, law firms The Cook Group and Practus, and sandwich and salad cafe Ukraft.

Companies routinely threaten to leave cities as a tactic to win concessions.

“People get frustrated all the time and say they’re going to move,” Pistor said. “Who knows if those are really going to happen or not?”

But some invested in downtown say they have little choice. Waldrop said that, amid the area’s challenges, he now is looking for out-of-state investment opportunities.

“I’ll always love downtown,” he said. “(But) I don’t want to do business down here anymore.”

Steph Kukuljan and Janelle O’Dea of the Post-Dispatch contributed to this report.

Daily updates on the latest news in the St. Louis business community.