Digital optimization specialist Amplitude (NASDAQ:AMPL) became the latest cloud stock to make a splash in the public markets, landing on the Nasdaq Tuesday through a direct listing.

The software company enters the stock market with strong momentum with revenue up 57% in the first half of the year to reach $129 million in the last four quarters. It’s also going public at a time when interest in cloud stocks has soared as the so-called “digital transformation” has accelerated business demand for cloud software. However, Amplitude is up against some stiff competition in analytics, including entrenched players like Adobe and Google, which offer their own packages under Adobe Experience Cloud and Google Analytics. Let’s take a look at how plans to differentiate itself as it carves out a new niche in digital optimization. 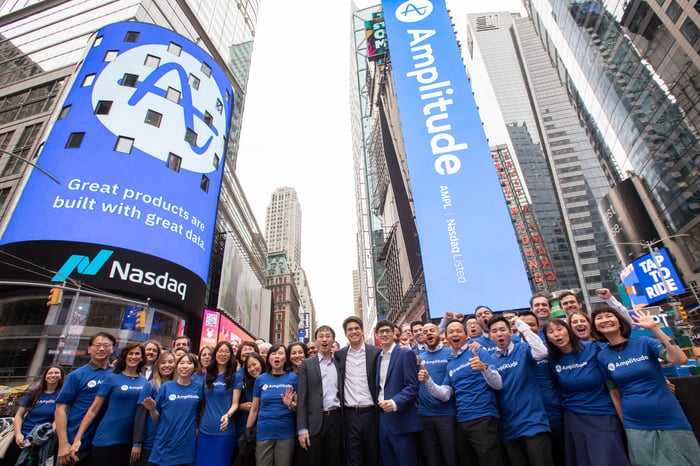 Some investors sizing up Amplitude believe that the company faces a crowded field, competing with the likes of Google Analytics, which is widely adopted and has a popular free tier. However, there are some important differences between Amplitude and its big tech competitors. In the S-1, the company argues, “Businesses have used a range of point solutions built for other use cases in an effort to address their needs, but none of which offer the breadth and depth of capabilities offered by our Digital Optimization System.”

According to Amplitude CEO Spenser Skates, what distinguishes his company is its focus on providing step-by-step data on the performance of a digital product rather than analytics for marketing, which is what Adobe and Google focus on. Amplitude sells to the Chief Product Officer while offerings from competitors appeal to the Chief Marketing Officer.

In an interview with the Motley Fool, Skates explained, “The biggest thing that we come up against is Adobe and Google Analytics. It’s kind of the previous generation of marketing-centric tools that were built for the CMO (Chief Marketing Officer). Product teams are forced to use them and they get frustrated and that’s when they end up coming to us.” Skates added, “The question for us isn’t competition. It’s how big is this trend going to be,” meaning running a product team through data.

That focus on product is finding a wide audience as Amplitude now has 1,280 customers, including 26% of the Fortune 100 and 22 with annual recurring revenue above $1 million, as well as 311 with ARR above $100,000. The company has also expanded from selling to tech companies like Twitter and Atlassian to selling to mainstream consumer-facing companies like Walmart, Ford, Burger King, and NBC as those companies have realized the importance of tracking the performance of their digital products.

For example, Amplitude helped Anheuser-Busch transition its sales model to a digital-first one, and the company’s retail customers now receive daily personalized recommendations based on AI to stock the right assortments.

Skates sees the opportunity in front of his company largely as a greenfield one, or an untapped, emerging market. The company estimates its total addressable market to be valued at $37 billion, which is based on a bottom-up estimate extrapolating data from its current customer base to the broader market.

It will take the market time to evolve as the company generated less than 1% of that value in revenue in the last four quarters, but the pandemic has accelerated the “digital transformation,” or the process of every company building tech infrastructure. As Skates sees it, digital optimization is the next step in that evolution. Once companies like Anheuser-Busch have the tech infrastructure in place, they are going to look for ways to use it to improve their business.

While competition is a risk for almost any company and the competitive field is evolving in digital optimization, the threat from Google or Adobe doesn’t seem to be significant enough to avoid the stock. For now, the most important challenge for Amplitude is executing on its business and making the sale to Chief Product Officers.