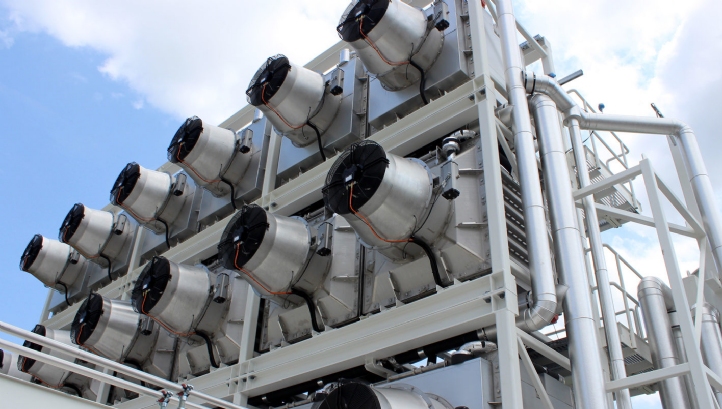 (Bloomberg) –Skyrocketing carbon prices and a “code red” warning about the threat posed by climate change are giving fresh momentum to a technology that captures and removes greenhouse gas emissions so they can be buried.

The market for these tools could reach $2 trillion if used to cut pollution from heavy industry, according to Credit Suisse Group AG. With carbon more than doubling in the past year and prices set to reach 100 euros ($118) as soon as the middle of this decade, capture technology finally is going mainstream as governments push to reach net zero.

The cost to release carbon has never been higher in Europe and it’s poised to keep increasing, creating a tipping point where preventing the emissions becomes a viable economic alternative. Capture technology already is used in North America and Australia, and large projects are being developed in the U.K., Netherlands and Norway.

“Carbon pricing is driving industries to push to adopt the technology sooner,” said Samantha McCulloch, head of carbon capture usage and storage at the International Energy Agency. “The growing portfolio of CCUS projects around the world is important to refine these technologies, reduce costs and support the scale-up.”

Carbon-capture technology has been around for decades and is used in some industries, but it’s still expensive – costing as much as $120 a ton in cement production and power generation, according to the IEA. Costs depend on the location of the project and the technology used. That compares to the current cost of pollution permits of about 55 euros a ton.

The process siphons off carbon dioxide from fossil fuels, compresses it, transports it and then stores it in depleted undersea oil reservoirs. The number of projects planned around the world has risen six-fold since 2019 to 300, according to Wood Mackenzie Ltd.

Carbon prices could reach 100 euros as soon as 2025, according to Bank of America Corp. At that level, it’s more economical long-term for some sectors using natural gas to capture their emissions rather than paying for permits to release them.

Norway and the Netherlands are leading the way in Europe, with the U.K. in hot pursuit. This year, the Dutch government announced it will spend $2.5 billion for the first large-scale CCS project on the continent. Norway is investing $1.9 billion, and the U.K. has pledged $1.4 billion over the next decade to create four carbon capture hubs.

These three nations, spread around the North Sea, have a history of fossil-fuel exploration and production. Spending by U.K. oil and gas companies in the North Sea last year fell to the lowest level since 2004. Carbon-capture technology could be key to keeping those industries — and the sectors they supply — alive as climate targets tighten.

“We need to see higher carbon prices to make those projects profitable,” said Anders Opedal, chief executive officer of Equinor ASA, which is developing CCS in the U.K., Norway, Germany and the Netherlands. “It actually needs to be more expensive to pollute than actually capture and store.”

Britain has the most ambitious climate goals of the G-20 nations, targeting a 78% reduction in emissions by 2035. The nation has committed to helping fund two industrial hubs, where heavy industry and power generation can use carbon capture and storage by 2025, with another two by the end of the decade.

The aim is to scrub as much as 10 million tons of carbon dioxide from the atmosphere every year. Details on how the funding will be allocated are due before December.

“We need to be sure we could get those prices over a long time period, but we’re getting pretty close,” CEO Will Gardiner said in an interview on Bloomberg Radio.

Drax’s project will start in 2027, and by 2030 it will capture and store 8 million tons of carbon dioxide a year.

In 2019, the world emitted about 33 gigatons of carbon. Operational projects are capturing just a fraction of that, about 40 million tons, according to Wood Mackenzie.

There are 19 large-scale CCS facilities in operation today and another 32 in development, according to Credit Suisse. If these all come online, they could store 100 million tons – a slightly bigger fraction.

There’s also a chance the technology might not be as effective as promised. The world’s biggest project, at Chevron Corp.’s $54 billion liquefied natural gas plant in Australia, has fallen short of its target to capture 80% of emissions from the plant, burying just 30% over five years.

“The tech isn’t there yet for large-scale adoption, but our industry has to start changing how we operate,” said Andrew Gardner, chairman of Ineos Grangemouth Ltd., which is working with Royal Dutch Shell Plc on the Acorn project in Scotland that’s scheduled to start in 2027.

The system developed by Oslo-based Aker Carbon Capture ASA costs between 60 euros and 120 euros per ton, CEO Valborg Lundegaard said. That means CCS could be nearing a crossover point.

Prices in Europe’s carbon market, the world’s biggest until trading began last month in China, are set to rise as the EU tightens the screws on industry in order to cut pollution by at least 55% by 2030 from 1990 levels. But because of the upfront cost of the technology, there is no consensus on what price will prompt companies to stop releasing greenhouse gases into the atmosphere.

Carbon capture probably needs to be cost-competitive by the end of the decade to achieve the rate of deployment needed to help nations reach net zero, according to BNEF. It potentially could reduce industrial emissions by as much as 46% in 2050.

“It’s a question of when, not if, for CCS becoming economic and coming to the fore,” said Mhairidh Evans, an analyst at Wood Mackenzie. “The 2020s are about that market development.”