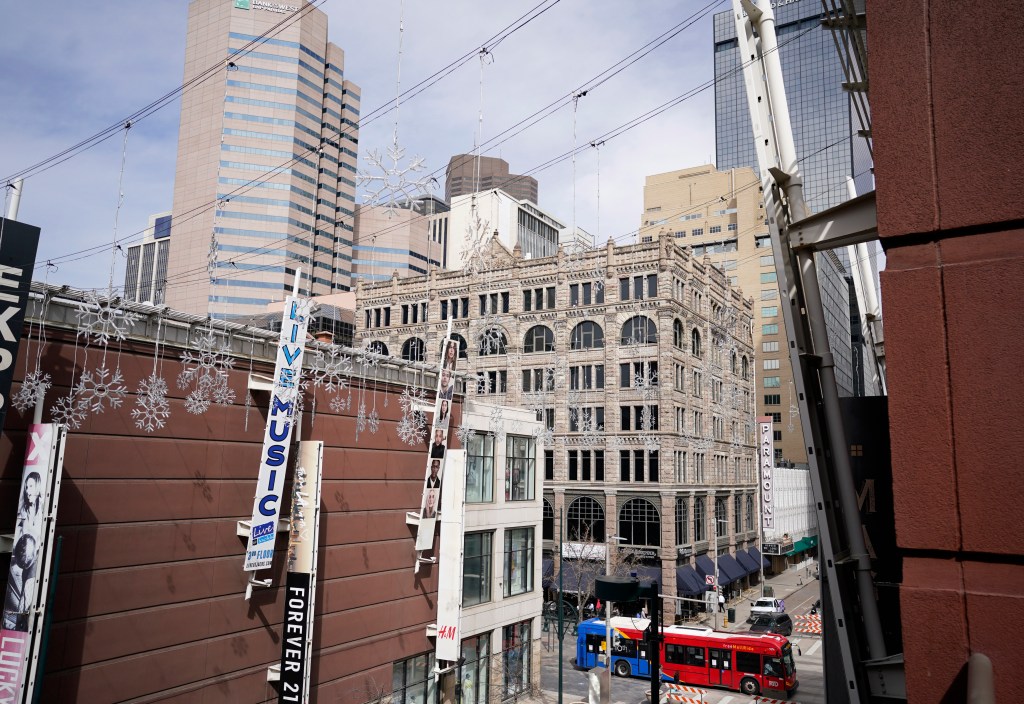 Denver, did you forget about Upper Downtown?

An effort to rename and rebrand the city’s Central Business District formally got off the ground in late 2019. That’s when the Downtown Denver Partnership released a plan focused on bringing more public activity and private investment to the area that has been overshadowed by trendier downtown enclaves like Lower Downtown and the River North Art District over the past three decades or so.

Bounded by 14th, Champa, 20th and Sherman streets, the CBD is home to some of the tallest buildings on the Denver skyline, close to 20 million square feet of office space, a glut of hotels rooms and the Colorado Convention Center.

Not too long after that public unveiling came COVID-19, which emptied out office buildings and squashed convention center business. Amid protests over the murder of George Floyd, the area also saw widespread property damage last spring.

Those events did not stop the rebranding efforts. During the revamped A Taste of Colorado festival this weekend, officials hope visitors will take note.

“The things that happened over the course of the pandemic were certainly challenging, but they don’t define the Upper Downtown area,” Tami Door, the partnership’s president and CEO, said.

The progress is manifesting in a couple of ways at street level, Door said. The timing is key. Work on the long-planned redevelopment of the 16th Street Mall is set to get underway next year. That could bring a whole new set of complications to downtown life and creating more reasons for people to visit the area is viewed as a necessary lifeline.

There are new public gathering spots in the Upper Downtown area like the Outer Space. The formerly vacant lot at 16th and Welton streets has been turned into a park of sorts that has hosted a live music series over the spring and summer.

New public art, including a mural from Denver artist Thomas “Detour” Evans in the aforementioned Outer Space, has sprung up. Efforts to plant more trees in the area continue, partnership officials say.

Bringing in new retailers is another major prong in the revitalization effort.

Bob Pertierra, who took over as the partnership’s senior vice president of economic development in June, said he is working on a program that will connect willing landlords with Denver-based or regional brands that might be interested in taking over space in a high traffic area. The partnership will be looking for city help in that effort.

Partnership officials are touting the overhaul of the office tower at 410 17th St. as evidence of private sector buy-in to its efforts in the area.

That work culminated in a major overhaul of the lobby. Working with a large team from architecture firm Gensler, the renovations opened up the space to let in more natural light and created more options for indoor and outdoor seating, Llorente said. A conference room and fitness facility were added but the big win from the Downtown Denver Partnership’s perspective was bringing in a retail tenant that invites passersby into the space.

Little Owl Coffee, an ultra-sleek roastery that has had a cafe in LoDo for years, opened a second location at 410 17th this summer. Already serving espresso drinks from behind a long counter, Little Owl is expecting to secure a liquor license soon and add beer, wine and spirits to its menu, Llorente said.

“Little Owl, with their reputation, they could have gone anywhere but they really liked what we are trying to do,” Llorente said. “They are a LoDo business but they recognized what is going on in Upper Downtown.”

Strong amenities are part of SteelWave’s appeal to would-be office tenants, but so is room to grow. Online marketing materials for the building show more than 117,000 of its roughly 437,000 square feet are available. That’s kind of room to grow is a hallmark of many buildings in the CBD/Upper Downtown area, according to Door.

Brokers Chris Phenicie and Hilary Barnett, from real estate services firm CBRE, are working with SteelWave on leasing. Being able to provide a neighborhood name that provides context about where a property fits in the grander scheme of the city has value, Barnett said, particularly when pursuing would-be tenants are from out of state.

“I very much appreciate the effort to create another end to the barbell in downtown,” Phenicie said of the Upper Downtown rebrand. “Central Business District isn’t exactly a sexy name.”

One thing the Downtown Denver Partnership is not endorsing is the abbreviation UpDo. Almost as soon as the Upper Downtown branding was announced in 2019, social media erupted with the use and jokes about that shortened form, mimicking the style of nearby areas like LoDo, RiNo and LoHi, or Lower Highland.

Branding matters for places the same as it does with products and services.

Melissa Akaka, an associate professor of marketing at the University of Denver’s Daniels College of Business, lives in Highlands Ranch, or as she calls it for short “the Ranch.” When talking about “the Ranch” people think of a suburb full of families far removed from downtown Denver. In Akaka’s experience, that’s a good fit.

“I have three kids and it turns out to be a much easier place to live for me,” she said. “It delivers on all it promises.”

Creating an identity around a neighborhood in real time, as the partnership and its supporters are working to do in the Central Business District turned Upper Downtown, sends signals, Akaka said. It’s an effort that can influence who wants to live there and, critically, can have an impact on property values, she said.

“When I hear Upper Downtown I think of places like New York,” she said. “This has partly to do with identity; how we connect who we are to the places where we live.”