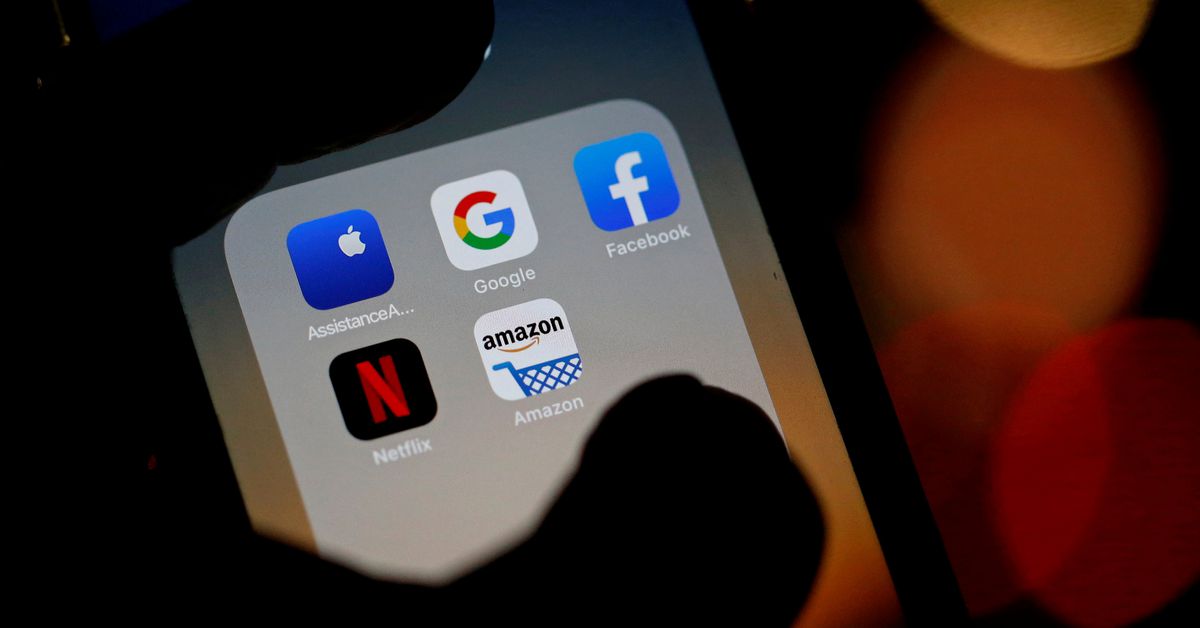 The logos of mobile apps, Google, Amazon, Facebook, Apple and Netflix, are displayed on a screen in this illustration picture taken December 3, 2019.

LONDON, Sept 9 (Reuters Breakingviews) – So overwhelming is the desire to find the next Alphabet (GOOGL.O), Amazon.com (AMZN.O) or Facebook (FB.O) that investors are chasing growth at any price. Just about any software company offering cloud-based services now commands a nosebleed valuation. The discount rates by which these enterprises are valued make no sense. By buying loss-making businesses at exorbitant price tags, however, investors set themselves up for extraordinary losses.

Technology bubbles tend to form when investors project the returns from an earlier generation of market leaders onto new ventures. Thus, the English canal mania at the end of the 18th century was inspired by the great profitability of the Bridgewater Canal, completed in 1761. Likewise, the British railway mania of the 1840s was spurred by earlier successes, such as the Liverpool and Manchester Railway, which opened in 1830. During the dot-com bubble, every day-trader went in search of the next Microsoft (MSFT.O).

The current technology bubble is no different. For nearly two decades, the share prices of Amazon, Google parent Alphabet and Apple (AAPL.O) have compounded by more than 20% a year. Since their initial public offerings, Tesla (TSLA.O), Netflix (NFLX.O) and Facebook have seen their stock prices increase at annualised rates of around 60%, 40% and 30% respectively. Over the past year and a half, tech stocks delivered the bulk of the market’s returns. They now account for a third of the MSCI All Country World Index – a higher level than at the peak of the 2000 internet mania.

A generation ago, investors like Fidelity’s famed fund manager Peter Lynch, popularised the investment discipline of buying “growth at a reasonable price”. They even gave it an acronym: GARP. Today’s investors buy growth at any price. Animal spirits are not so much directed at the established tech giants. Alphabet, Facebook and Microsoft trade at around a 50% premium to the U.S. stock market; their valuations don’t appear unreasonable considering their dominant market positions and mouthwatering profit. At the peak of the dot-com bubble, Microsoft shares sold for twice their current earnings multiple.

Instead, investors have their heads in the cloud, otherwise known as the software-as-a-service (SAAS) sector. The BVP Nasdaq Emerging Cloud Index has been up some 300% since inception in October 2018. Firms in this index, which range from Adobe (ADBE.O) to Zoom Video Communications (ZM.O), trade on stratospheric valuations. Since profit is non-existent for many, it is valued on multiples of revenue. For instance, software provider Adobe has a market capitalisation north of $300 billion on some $15 billion of sales. Adobe’s valuation is relatively conservative: The cloud complex as a whole trades on 28 times forward sales.

A new valuation metric, known as the “Rule of 40”, proclaims that any business whose combined sales growth and cash flow margin exceeds 40 is a bargain. Based on this measure, it would make sense to buy a stock whose revenue is projected to double in a year even if losses ran to half of sales. Cloud businesses are popular because they promise high margins and a reliable stream of recurring subscription revenue. They are pitched on their “total addressable market” – another dubious metric.

At current valuations, they will have trouble delivering. Earlier this year, the Australian investment firm TDM Growth Partners estimated that the median cloud company in the BVP index would have to grow earnings by 30% annually for 10 years in order to deliver an acceptable risk-adjusted return. To date, only two large software companies – Microsoft and Salesforce (CRM.N) – have achieved this feat.

A study by strategist Michael Mauboussin of 57,000 public companies since 1950 found that just 1 in 300 listed companies has compounded sales by 30% annually over a 10-year period. Ben Inker, head of asset allocation at GMO (and my former boss), points out that since 1981 companies that trade on more than 10 times sales have delivered just half the return of the S&P 500 Index. Investors buying SAAS stocks at nearly three times that valuation will be lucky to get their money back.

Extravagant valuations applied to growth companies aren’t confined to the cloud. TDM calculates that another investor darling, Peloton Interactive (PTON.O), which sells exercise bikes with online subscriptions, would have to increase its current subscriber base from 2.3 million to 25 million over the next decade to justify its current $29 billion valuation. Marathon Asset Management estimates that if Airbnb (ABNB.O) takes 50% of the market for vacation rentals (double its current share), it would still only be worth half its current $99 billion market value.

Tesla (TSLA.O) is the ultimate reality distortion machine. Back in 2015, Chief Executive Elon Musk proclaimed that the electric-vehicle maker would grow sales by 50% a year for a decade. At the time, Tesla’s sales were $6 billion. As Mauboussin observes, no company starting with sales of that size has ever grown at such a rate.

Tesla’s valuation implies that it will dominate the market for electric cars. But as Investment Management Associates CEO Vitaliy Katsenelson points out, the element of time is ignored. “Getting to an annual production of even a few million cars will require time – a lot of time. A lot of dirt has to be moved, permits issued, equipment installed, people hired,” Katsenelson wrote a year ago, noting none of this was priced into Tesla stock.

Today’s extreme valuations derive not just from elevated expectations about exciting new technologies. Ultra-low interest rates have corrupted the discount rates needed to value companies. Investors appear to be applying a lower discount to uncertain returns in the distant future than to more immediate gains – a practice known as “hyperbolic discounting”.

“In Star Trek,” Katsenelson noted, “there are convenient wormholes, which cut corners through space, getting you to that galaxy a billion light years away in hours. Low interest rates have messed with the temporal properties of the market and created a wormhole in time and in Tesla’s stock. It will take years, maybe even a decade, for Tesla to produce enough cars to justify its valuation. Today’s market valuation assumes it has already happened – that the capital has been raised and spent and that it cost nothing.”

Since Katsenelson made these comments, Tesla’s share price has more than doubled. But those wormholes will close one day. Caveat speculator.