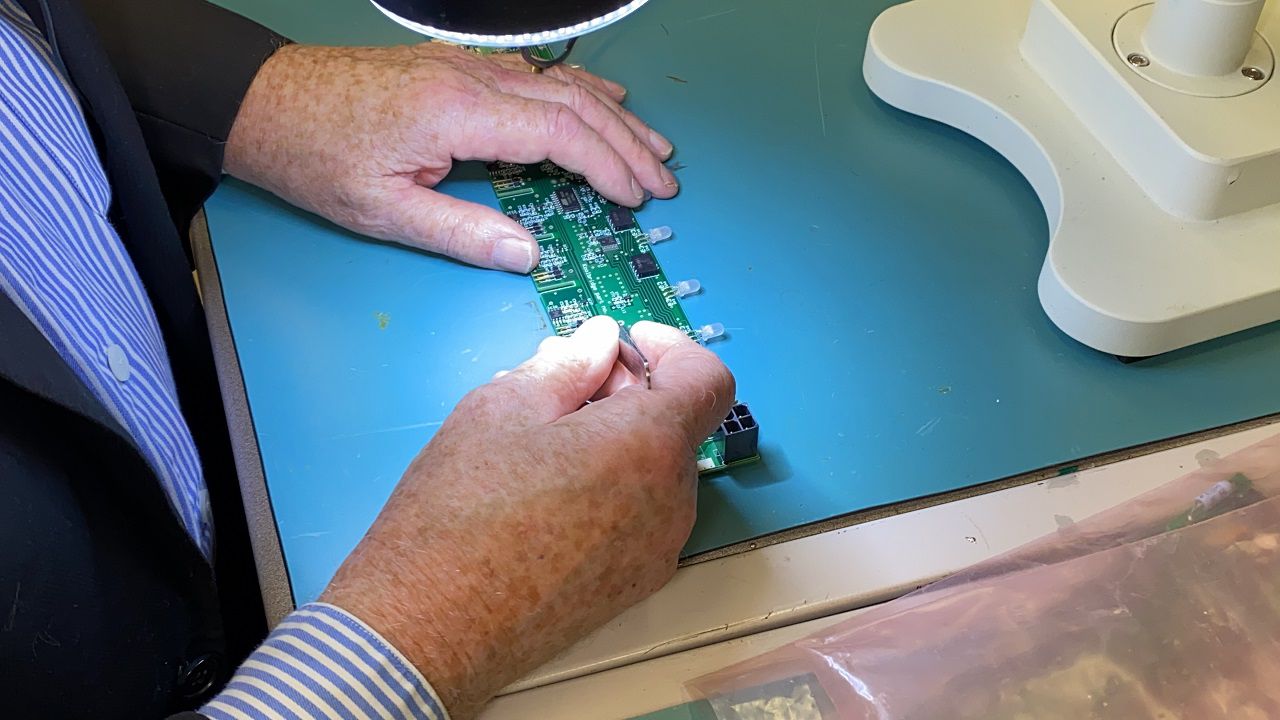 MORRISVILLE, N.C. — The future of solar power might be sitting on Paul Dent’s workbench.

Ever since he lost power for 10 days during Hurricane Fran in 1996, Dent has been trying to figure out a way to give homeowners some redundancy and save the planet at the same time.

He says the problem with installing solar panels on your house is they generate power for the grid, but not for your own use. Now, he’s working on a system that would let you switch your home back and forth between your solar array and the grid.

Dent is well-known in the Research Triangle. He came here when Swedish telecommunications giant Ericsson had a major presence in North Carolina in the 1990s. When the company decamped for San Jose, California, Dent and several other Ericsson alumni remained behind, choosing instead to strike out independently.

Dent founded Koolbridge Solar in 2013 and is the company’s chief science officer. He now shares a workshop with another small electronics company near Research Triangle Park.

“A lot are here because the proximity to three universities makes it possible to have access to educated people,” he says.

North Carolina has become a force to be reckoned with in the science and technology economy.

Software company Red Hat, founded in Raleigh, grew into a multibillion-dollar company before IBM acquired it in 2019.

Some 3,600 North Carolinians work for pharmaceutical giant Pfizer, including hundreds at its expanding Sanford facility.

On a smaller scale, tech startups have sprung up all over the state — N.C. Tech Association estimates there were more than 21,000 technology establishments in North Carolina in 2019.

Ask Dent how North Carolina does it, and he points to two things: education and quality of life, including a low cost of living compared to other tech centers like California.

Alpha Nano Tech founders Daria and Nazar Filonov say something similar. They started a firm in Morrisville specializing in nanomedicine six years ago. Daria Filonov says that having easy access to three research universities is a big help for firms like theirs. Not only can they get the brainpower, but they can also make use of multimillion-dollar equipment, such as electron microscopes, something their own firm could never afford.

Chris Chung of the Economic Development Partnership of North Carolina says those are common refrains. He says both factors ultimately influence the availability of talent, either in terms of new college graduates or luring existing workers from other states.

“We either have the people today who have the skill-set those companies believe they need to hire, or they think that they’re going to locate in North Carolina because they’ll have the best chance of recruiting people to work for from outside of the state because we’ve got a good quality of life,” he says.

According to N.C. Tech Association, North Carolina ranks seventh nationally in total tech industry employment growth. Women make up 35% of the state’s tech workforce, the second-highest proportion in the country. The association reports nearly 270,000 North Carolinians worked in the tech industry in 2019, earning some $30.4 billion in income. Add in the indirect economic benefits, such as local businesses those workers patronize, and the tech industry is estimated to contribute to about 20% of the state’s overall employment.

Chung says if North Carolina wants to avoid the kind of economic damage that accompanied the decline of the tobacco, textile, and furniture industries, leaders need to continue to invest in education. More specifically, he says educators need to continually talk to business leaders about their workforce needs and adjust accordingly.

Dent and the Filonovs both say the best way North Carolina can improve its competitiveness is to expand access to venture capital. Dent says one of the reasons so many tech companies settled in California was easy access to people willing and able to underwrite their research and development costs.