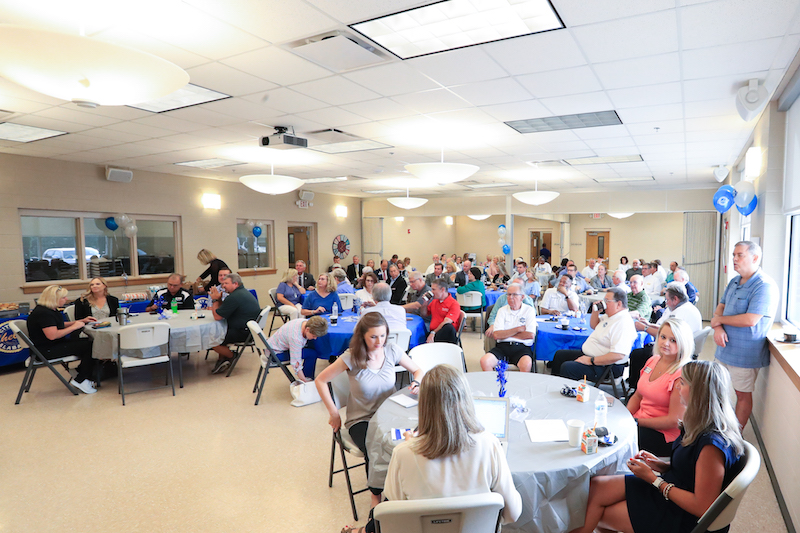 CHELSEA – A quick drive through Chelsea would provide a basic idea of its development, but on the morning of Tuesday, July 13, Mayor Tony Picklesimer shared details about the specific facets of the city’s growth.

Nearly 100 people filled a room at the Chelsea Community Center to hear an update on infrastructure projects, businesses, schools and other topics during a Coffee with the Mayor event hosted by the Chelsea Business Alliance and The Shelby County Chamber.

Picklesimer started with summaries about completed and ongoing projects, including a new fire station on Shelby County 51 and a multi-level playground behind the community center.

“This station was very much needed to serve the east end of our city, which is one of the fastest-growing areas in our city,” he said. “It also gives more support to our neighboring city of Westover when they need it. This station is fully equipped and fully staffed, and it also gives us a very quick response time to Chelsea Park Elementary, which I think is very important.”

The three-story playground at Melrose Park opened in November.

“It is a hit with the young folks for sure,” Picklesimer said. “This place makes you want to be 6 years old again. It is a tremendous playground.”

The park also includes a splash pad, which Coffee with the Mayor attendees were invited to see during a ribbon cutting ceremony for the facility.

An amphitheater will be constructed at the park, too.

Picklesimer said the second phase of work is underway at the city’s sports complex off Shelby County 11.

“The batting cage is near completion, and the lights are up at the new baseball fields, including a championship field that will host many big games for many years to come,” he said. “We’re looking forward to having that. Softball and baseball are a big deal here in our city.”

A walking trail and cross country course skirting the perimeter of the complex has been completed in the past year, Picklesimer said, adding, “This trail weaves in and out of the woods around our complex and goes right behind the beautiful Weldon Pavilion that sits on the hill over the lake. This project was done in a 50-50 partnership with the Shelby County Commission.”

Regarding roads, the city and county are partnering on a project to realign the intersection of Shelby County 39 and Shelby County 47 in front of Chelsea City Hall.

“This construction was much-anticipated,” Picklesimer said. “This project is underway now with a scheduled completion in November. The project also includes detours and some aggravation … but it will certainly be worth the trouble once we get there, so please be patient as we work through this.”

Picklesimer said such projects are a result of the continuing growth evident in Chelsea’s healthy housing market and number of new businesses.

“Our housing market continues to be strong,” he said. “We have a new subdivision underway down Liberty Road. We have expansion going on at Chelsea Park and Willow Oaks.”

Infrastructural work continues at Foothills Business Park, a commercial site that will be home to Therachem MediLab’s new facility, an expansion of the company’s existing facility in Chelsea.

“This new facility in the business park will be the United States headquarters for this company,” Picklesimer said. “We’re very excited about that.”

“Maintaining this growth pattern is something that I take very seriously,” Picklesimer said. “We will continue to partner with 58 INC. in the coming months, and continue to spotlight our city and keep this growth coming.”

Picklesimer talked about city leaders’ recent decision to have a feasibility study done to determine whether Chelsea could successfully form its own city school system.

“Frankly, we need a new high school and we need improvements to our middle school,” he said. “These two facilities are the driving force to this study. The results from the study are due in mid-October, and we will publicize this report when it’s issued. This will tell us what would have to happen and what revenue would be needed to fund this school system, should we proceed with its formation.”

Picklesimer said the school system’s initial revenue would come in the form of an ad valorem tax or a property tax.

Picklesimer also addressed discussions of nearby communities potentially being annexed into the Chelsea city limits if the city were to form its own school system.

“These areas of possible annexation are Highland Lakes, Dunnavant Valley, Mt Laurel and our neighbor to the east, the city of Westover,” he said. “We are currently in discussions with the mayor and some Council members from Westover to determine if a merger of our two cities makes sense.”

Picklesimer said any annexations would have to be decided by a vote of the particular area’s residents.

Picklesimer emphasized the city’s interest in potentially forming its own school system is not related to the quality of education available at the schools.

“This is not and has never been an academic issue,” he said. “Our kids get the best. To Dr. (Lewis) Brooks and to the principals and assistant principals and teachers, we can’t thank you enough. We applaud you, especially what you’ve gone through with COVID.”

“Our city slogan ‘All About Family’ continues to be the guiding light for our city as we move forward,” he said. “I thank each of you that play a part in that process. My prayer is for continued success for the city of Chelsea.”