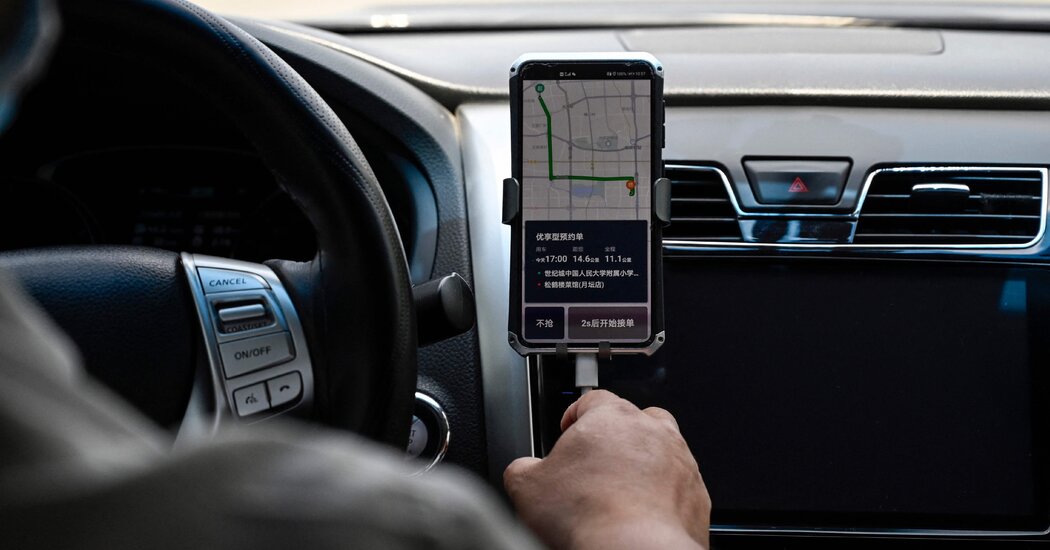 Tensions are growing between China and tech companies inside — and outside — its borders.

China is cracking down on domestic tech giants with U.S. ties. On Sunday, Beijing officials ordered Didi, the ride-hailing app, to be removed from the country’s app stores over concerns about the handling of customer data, days after the company completed a blockbuster U.S. I.P.O. Yesterday, they suspended new user registrations for platforms run by two other Chinese companies that recently listed shares in New York, citing the need for cybersecurity reviews. Didi’s shares fell nearly 30 percent in premarket trading, below their I.P.O. price.

Meanwhile, U.S. tech firms are making threats about their businesses in Hong Kong. Amazon, Apple, Facebook, Google and other American tech groups have threatened to pull out of the territory if the government doesn’t roll back efforts to control online speech there. The threat was made in a letter sent last month by an American trade group representing Big Tech in Asia.

A trans-Pacific tech breakup would be messy. Many large U.S. tech companies, notably Apple, have spent billions of dollars building their presences in China, both by moving manufacturing there and by courting local customers. An investigation by The Times showed the lengths Apple has gone to keep Chinese regulators happy, even breaking some of the privacy pledges the company has made to customers.

Further reading: A look at the $150 million semiconductor chip-making machine produced by a Dutch company that has become a key lever in the tech cold war between China and the U.S.

Oil prices rise as OPEC fails to reach a deal on production. Brent crude traded at multiyear highs after the alliance of oil producers was unable to agree on how much more oil to produce. Behind the summit’s collapse was the United Arab Emirates, which refused to back quotas pushed by Saudi Arabia.

The search for victims of the Miami condo collapse resumes. Four more bodies were pulled from the ruins yesterday, bringing the death toll to 28, with more than 100 people still missing. What remained of the high-rise building was demolished on Sunday, and evidence suggests that despite Florida’s strict building regulations, local enforcement was lax.

Nextdoor, the neighborhood-focused social network, is going public. The company, which covers 275,000 neighborhoods in 11 countries, is merging with a SPAC to gain a Nasdaq stock listing. The move, which values Nextdoor at $4.3 billion, comes as the company has tried to clean up its reputation as a haven for racism and targeted online harassment. (Its expected ticker is “KIND.”)

Tech and media moguls are headed to Sun Valley. The high-powered Allen & Company gathering in Idaho is back this week after being canceled last year, with off-the-record discussions of topics like media takeovers. Expected attendees, according to The Wall Street Journal, include Warren Buffett, Bill Gates, the new Amazon C.E.O., Andy Jassy and — perhaps awkwardly — Discovery’s David Zaslav and his soon-to-be employee, WarnerMedia’s Jason Kilar.

Hundreds of companies around the world are reeling after a software provider to small- and medium-sized businesses was hit by a major cyberattack. Russian cybercriminals are suspected of orchestrating what some experts are calling a “global supply chain hack.”

The damage is widespread. The Swedish grocery chain Coop had to close at least 800 stores on Saturday, while a pharmacy chain and 11 schools in New Zealand were also affected. Linking all of them was Kaseya, which makes systems management software that was in the middle of performing updates to guard against such an attack. Although Kaseya said that fewer than 40 customers had been affected, that group serviced hundreds of others, amplifying the effect.

The authorities suspect a well-known Russian group. REvil, which was accused of orchestrating an attack on the meat processor JBS in May, was identified as a likely culprit. While President Biden confronted Vladimir Putin last month over Moscow’s ties to cybercrime, Biden said over the weekend, “The initial thinking was it was not the Russian government, but we’re not sure yet.”

“This monitoring system is fundamentally weak, because it’s easy to cheat and doesn’t monitor very consistently.”

Regulators beg to differ on E.S.G.

Investors are demanding more information from companies about environmental, social and governance, or E.S.G., issues. Regulators are taking notice but aren’t coming to the same conclusions on what to do about it.

“We are clearly at a tipping point,” said Michael Passoff, the head of Proxy Impact, a shareholder services firm. He told DealBook that in 25 years of working in sustainable investing, the enthusiasm among shareholders for E.S.G. resolutions this year was “unprecedented.” So far, 34 such proposals at public companies have gained a majority vote, surpassing last year’s record-setting total of 21. Half of the successful shareholder votes on such proposals in the past decade have occurred in the past two years.

“You cannot direct the wind, but you can adjust your sails,” said Allison Herren Lee, an S.E.C. commissioner, in remarks to the Society for Corporate Governance. Lee, who has made E.S.G. a focus of her recent work, urged corporate board members to recognize the movement’s momentum. “This proxy season is just the latest affirmation of a sea change on climate and E.S.G.,” she said, adding that the S.E.C.’s disclosure rules should “provide investors with adequate information to test public pledges” that companies make on these issues.

“What if the sustainability standards turn out to be flawed?” asked Hester Peirce, another S.E.C. commissioner, in a letter to an accounting standards-setting body, whose “gaze has drifted to sustainability reporting,” she said. “We must be careful not to compromise accounting standard-setting in an effort to achieve objectives other than high-quality financial reporting, no matter how noble those objectives may be.” She will detail what role she thinks the S.E.C. should play in E.S.G. at a Brookings Institution event this month.

In other news: As E.S.G. investing becomes more popular, it is increasingly difficult for these strategies to outperform the market, according to recent research.