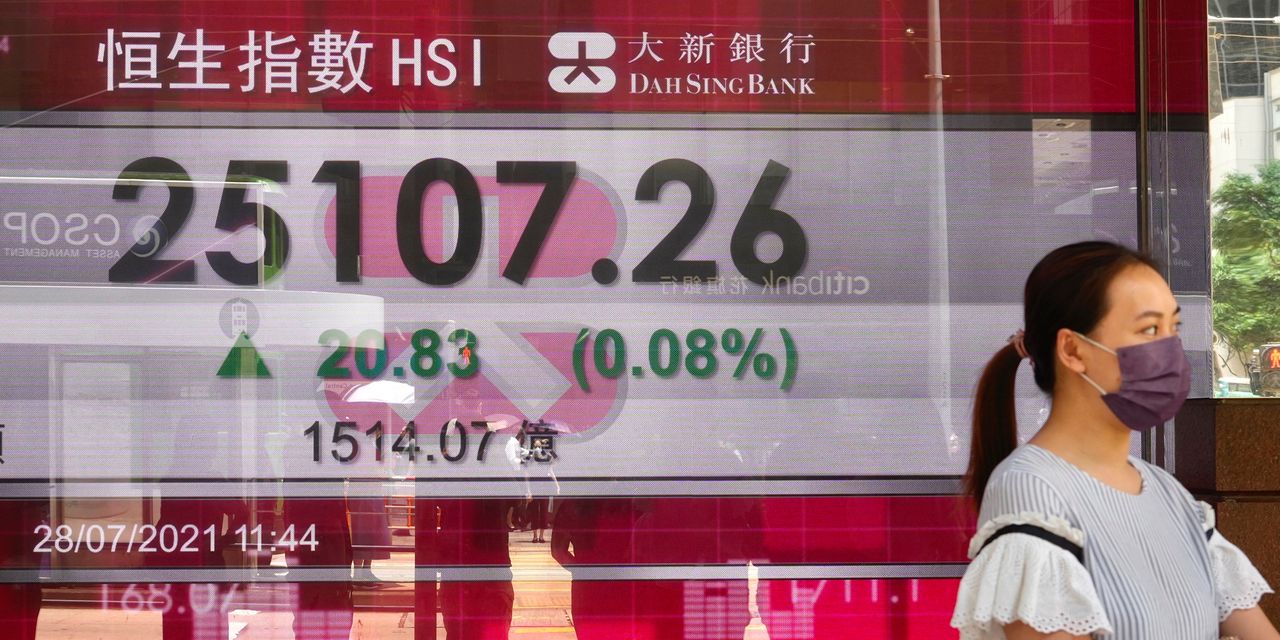 Chinese technology shares recouped some of their recent steep losses Thursday, after the country’s authorities swung into damage-control mode, but investors remain wary about how heightened regulatory pressure might crimp future corporate profits.

On Wednesday, Chinese state media talked up local stocks, while a top regulator privately told global financial firms that Beijing will consider the market impact before introducing future policies, according to people familiar with the matter.

“Sentiment remains cautious,” said Manishi Raychaudhuri, the head of Asia-Pacific equity research at BNP Paribas. “Investors believe that these regulatory changes might continue, because the objectives of the Chinese authorities are really long-term in nature.”

It could take one or two quarters to assess the financial impact of recent initiatives, said Adrian Zuercher, the head of global asset allocation at the chief investment office of UBS Group AG’s wealth-management arm. More broadly, he said: “It will take time to re-establish trust with the government.”

In Hong Kong on Thursday, the Hang Seng Tech Index jumped 8%, building on a smaller rise in the previous session. Still, it remains 7% below where it was a week ago, and 36% under its mid-February peak, before an earlier phase of the tech crackdown started to rattle investors. The broader Hang Seng Index rose more than 3%.

Among large stocks that have been beaten down recently, Tencent Holdings Ltd. leapt about 10% and Meituan gained 9.5%.

Louis Lau, director of investments at Brandes Investment Partners in San Diego, said he thought the rebound was driven by technical factors and was unlikely to last.

“People have a lot of questions about the future growth rates and profitability. For us, we think it may be still too early to buy a lot of these internet giants,” Mr. Lau said. “We want to see what is really the fundamental impact on their earnings, growth rates and margins before we can make such a decision,” he said.

Moves such as requiring after-school tutoring to become a nonprofit activity had exceeded his worst expectations, Mr. Lau added. The measures were “too fast and too many within a short period of time without adequate communication or consultation with the market,” he said.

Shares listed in Shanghai and Shenzhen have been comparatively shielded from the latest downdraft, as they have been in earlier phases of this year’s widening tech crackdown. The CSI 300 index added 1.9% Thursday.

Investors are seeking out stocks that benefit from China’s long-term initiatives and that aren’t exposed to crackdowns, said Mr. Raychaudhuri at BNP Paribas. That can mean onshore-listed stocks in sectors such as semiconductors, renewable energy and electric vehicles, he added. “That is one of the reasons why the mainland market has been relatively less tumultuous than the offshore market,” he said.

Xing Zhaopeng, a senior China strategist at ANZ in Shanghai, said regulatory tightening would continue as senior leaders had indicated recently that strong GDP growth made this a good year for reform. “No pain, no gain. All these reforms will pave [the way for] the long-term prosperity of the Chinese economy,” he added.

China’s economy grew 7.9% in the second quarter, and various key economic data points for June all met or topped expectations, keeping China on track to meet its full-year growth target of 6% or more.

Recent policies on antitrust, data privacy and protecting teenagers are focused on tackling social issues, said Tai Hui, chief market strategist for the region at J.P. Morgan Asset Management, who added that he was optimistic on the long-term prospects for both on- and offshore markets.

—Xie Yu and Frances Yoon contributed to this article.