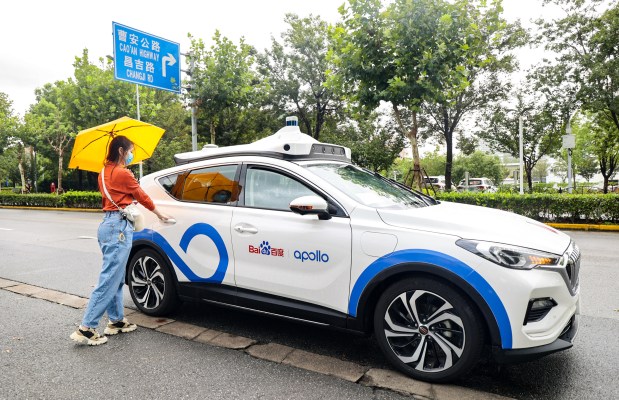 While Baidu says its robotaxis have achieved Level 4 capabilities, a human safety operator will be present during all rides, which are open to the public as of Sunday, in order to comply with local regulations. The Society of Automotive Engineers defines an L4 autonomous car as one that doesn’t require human interaction in most cases and can only operate in limited areas. Companies like Waymo, Cruise, Motional, Pony.AI and Yandex are all using a similar combination of lidar, radar, cameras and GPS to build a vehicle brain that’s capable of L4 autonomy.

Shanghai’s fleet will be made up of Baidu’s electric Hongqi EVs, its fourth generation autonomous vehicles produced with FAW. The company did not disclose how many vehicles it has initially launched, but a Baidu spokesperson told TechCrunch that the goal is to make it to around 200 vehicles in Shanghai. In total, Baidu says it is either testing or publicly deploying about 500 AVs across 30 cities.

While Baidu does have a permit to test its driverless tech in California, it hasn’t yet deployed any service and is instead putting most of its resources toward scaling up in China. There’s a huge increase in demand for robotaxi services at home, says a company spokesperson, so Baidu is focusing on improving its technology, building lots of vehicles and ensuring a good user experience. Shanghai marks the fifth city where the Apollo Go robotaxi service is open to the public, including Changsha, Cangzhou, Beijing and Guangzhou.

Just a few weeks ago, Baidu expanded its Apollo Go services in Beijing into the Tongzhou District, which is considered to be the eastern gateway into the city, adding 22 new stations over 31 miles. In April, the company launched 10 fully driverless robotaxis in the capital city’s Shougang Park, a 1.2 square mile area that has become the testing ground for China’s first commercialized robotaxi operations. No human safety operator sits behind the wheel of these cars, only a safety member in the passenger seat to provide riders with reassurance. Each ride costs 30 yuan ($4.60) and is open to passengers aged 18 to 60. Everywhere else, including Shanghai, rides are free because the service is still in its trial phase.

Riders in Shanghai can use the Apollo Go app to call a robotaxi from 9:30 a.m. to 11 p.m. and be picked up or dropped off at one of 150 stations across the Jianding District, which is home to Shanghai University, the Shanghai International Circuit and many tourist attractions.

Shanghai is also the location of Baidu’s Apollo Park, an autonomous vehicle facility for operation, testing and R&D. The 10,000 square meter space will house the 200 AVs Baidu hopes to bring to the city, which would make it the site of the largest self-driving fleet in East China.

Baidu’s long game is to deploy 3,000 AVs in the next two to three years across 30 cities in China. Considering the company has been investing in R&D for AV tech since 2013 and has been running the Apollo project since 2017, Baidu is poised to do just that. In June, Baidu and BAIC Group unveiled plans for the Apollo Moon, which is set to be mass-produced with a per unit manufacturing price of 480,000 yuan, or about $75,000, which is actually pretty cheap, all things considered. Baidu says it will produce 1,000 of these vehicles over the next couple of years, as well as different models yet to be announced, in order to supply its growing fleet.

Infrastructure is a big part of Baidu’s goals to expand Apollo Go. A spokesperson from Baidu said the company is also investing in building 5G-powered, V2X infrastructure in hundreds of intersections throughout major Chinese cities. Baidu is already installing sensors like cameras and lidar, coupled with edge compute systems that can transfer road information to autonomous systems, in order to reduce traffic congestion. In the long term, smart infrastructure will help AVs perform more robustly and serve to offset some of the huge costs associated with onboard sensors and computing power, according to the company.

While Baidu says its robotaxis currently still rely on onboard capabilities to achieve L4 autonomy, the company sees V2X as the future of large scale deployment.