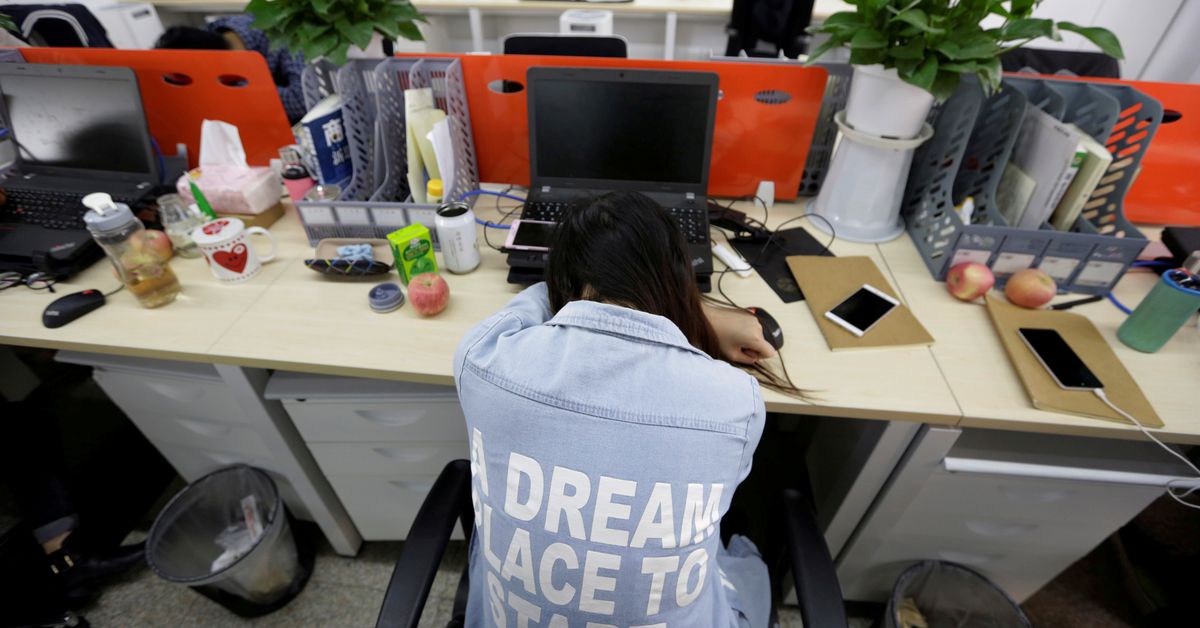 Yang Juan, an employee at Goopal Group, takes a nap in her seat after lunch, in Beijing, China, April 21, 2016. Office workers sleeping on the job is a common sight in China where workers often burn the midnight oil to meet deadlines and compete with their rivals. REUTERS/Jason Lee/File Photo

SHANGHAI, Oct 14 (Reuters) – A campaign calling on workers at Chinese tech companies and other high-profile firms to log their working hours on a public internet page has gone viral, in the latest backlash against a culture of overtime.

Organised by four anonymous creators who described themselves as recent graduates, the “Worker Lives Matter” campaign calls on employees at tech firms to enter their company name, position, and working hours in a spreadsheet posted on GitHub.

As of Thursday morning, more than 4,000 people who said they worked at tech giants such as Alibaba Group Holding Ltd (9988.HK), Baidu Inc (9888.HK), Tencent Holdings Ltd (0700.HK) and ByteDance had registered their data.

Employees have since also created separate spreadsheets for specific sectors such as real estate, finance, and foreign companies.

A majority of the entries on the spreadsheet show that while a five-day week is the norm, many staffers work 10 to 12 hours a day.

One of the creators said in a post that they hoped the list would be an effective reference tool for workers when choosing jobs.

In another post, the team argued that the “996” practice of working 9 a.m. to 9 p.m. six days a week was rife and working hours were at internet firms were often opaque.

Alibaba, Tencent, Baidu and ByteDance did not immediately respond to requests for comment.

Long work hours are a hot topic for China’s tech workers and others among the young, white-collar class.

The issue first gained attention in 2019, when tech workers launched a similar online campaign against “996”.

In recent months, criticism of long hours has gained traction because of a government crackdown on tech companies that has shone a spotlight on their treatment of workers.