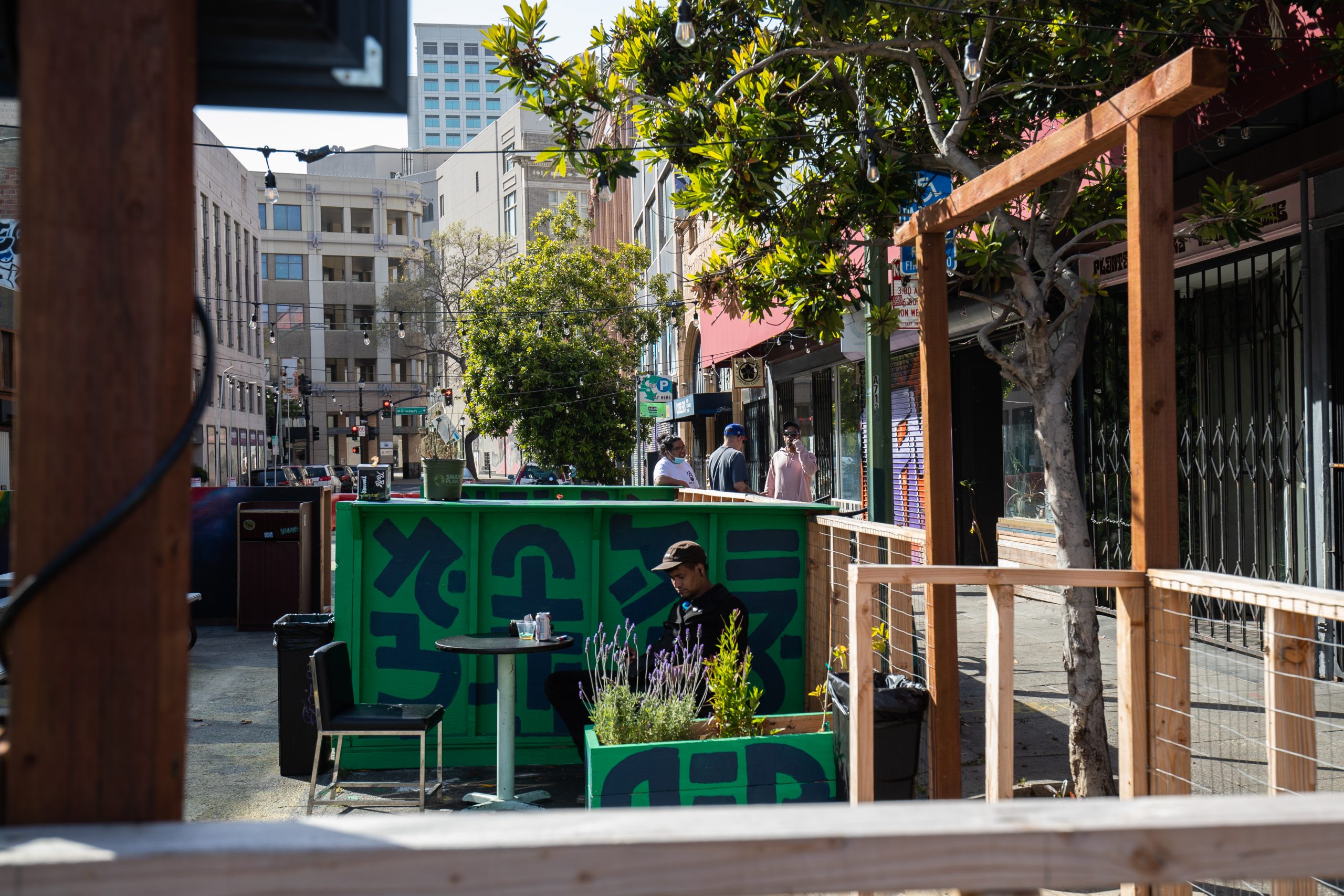 Oakland City Council voted on Tuesday to introduce an ordinance that would extend the city’s Flex Streets Initiative until March 31, 2022. The program, which was established through an emergency order in May 2020, was designed to help local businesses keep afloat during the pandemic by streamlining the permitting process for activities like outdoor dining and retail, mobile food vending, and street closures. Under Flex Streets, permit fees are eliminated and business owners applying for these permits receive automatic approval.

The initiative is currently scheduled to expire one month after the local emergency order is lifted, a date which hasn’t yet been determined. Councilmembers will cast their final votes on the extension on June 15.

District 1 Councilmember Dan Kalb and District 6 Councilmember Loren Taylor both made a point of saying they support a Flex Streets extension now, but not necessarily long term. “I do support the Flex Streets program,” said Kalb, but “I don’t think it should be permanent.”

At the request of City Council President Nikki Fortunato Bas, the council agreed to include one amendment to the Flex Streets Initiative should it be extended, to support the creation of more outdoor community markets similar to the Akoma Market, which sprung up in East Oakland during the pandemic.

City staff from various departments, who helped conceive the Flex Streets Initiative last year, presented an overview of the program and its impact during Tuesday’s meeting.

According to staff, Flex Streets resulted in the construction of over 100 parklets, more than 40 permits received by street vendors, and 13 street closures for outdoor business activities. The program has been used by restaurants as well as organizations such as the Black Cultural Zone and the Telegraph-Temescal Business Improvement District to host outdoor events. Flex Streets permits have also aided vendors who set up shop along Lakeshore Avenue and Grand Avenue during the pandemic.

City staff conducted a survey of local businesses that applied for a Flex Street permit, which was distributed digitally and in multiple languages. Most of the business owners surveyed said they found the application process easy and that the program increased their revenue. A majority of the survey respondents were male, white, and Asian-Pacific Islander.

The city’s report did not include a breakdown of where outdoor dining, parklets, and street closures have happened in the city as a result of Flex Streets. But Warren Logan, a policy director with the mayor’s office who has been involved with the initiative since its inception, provided information to The Oaklandside in February showing that parklets—areas of sidewalks or parking lanes repurposed for outdoor seating—have been particularly popular in North Oakland. Entire street closures for large-scale events involving multiple businesses have been popular downtown and in Jack London Square. Mobile food vending, which is also supported through the Flex Streets Initiative, has been more popular in East Oakland neighborhoods like Eastlake and Fruitvale.

Mayra Chavez of Huarache Azteca, a Mexican restaurant located on International Boulevard in Fruitvale, told The Oaklandside that sidewalk dining is risky because “International is a street where, on the weekends, you have people riding motorcycles on the sidewalk.”

Some small business advocates called in to voice their support for the extension. “Coming out of COVID, we need to get people out on the streets and we need walking and shopping around downtown,” Gregory McConnell, president of the Jobs and Housing Coalition, said during the public comment portion of the meeting. “I think the Flex Streets program has helped and will continue to help.”

Other advocates like Shifra de Benedictis-Kessner, executive director of the Temescal-Telegraph Business Improvement District, called in to express support but noted the need for adjustments.

“I think it’s definitely promising,” she said, “but we need some improvements.”