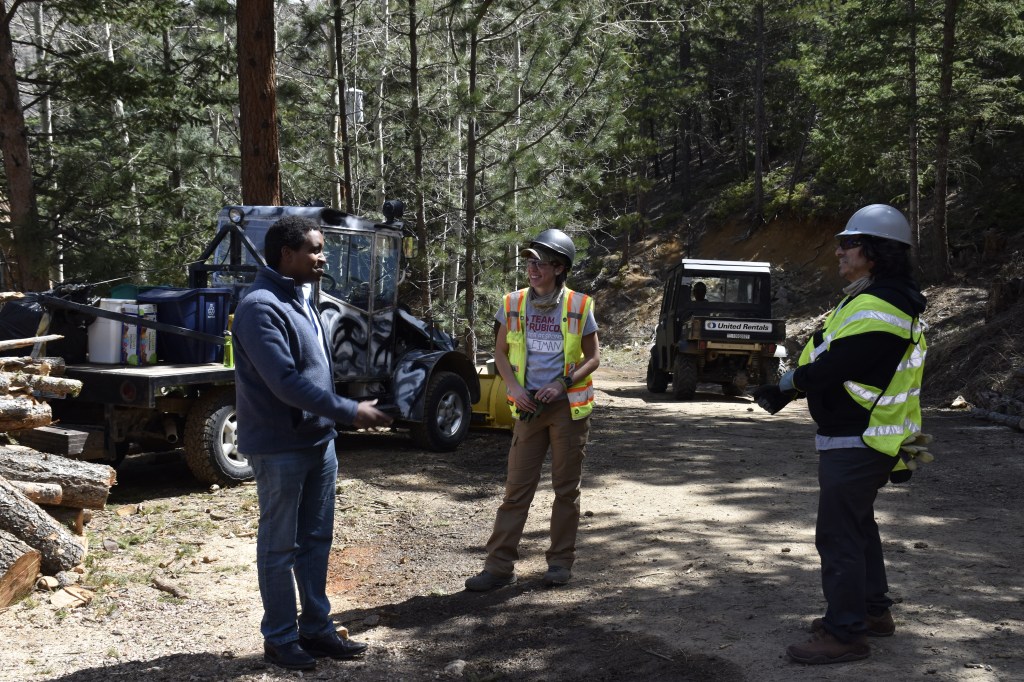 After climbing the twists and turns of a narrow dirt road that wound around the wooded hilltops of Jamestown, U.S. Rep. Joe Neguse stepped from an off-road vehicle and strapped on a hard hat to meet with disaster relief volunteers with Team Rubicon.

Saturday’s visit was one of several stops Neguse, who represents Colorado’s 2nd District, made as part of a tour across Boulder County to discuss legislative efforts. After serving at a Sister Carmen Community Center food drive, the Lafayette Democrat visited with volunteers in the mountains. Neguse made his final stop at the Table Mesa Shopping Center in Boulder to talk with business owners about the challenges they’ve faced in the wake of the pandemic and the March 22 mass shooting at King Soopers in the shopping center, which left 10 people dead.

“It’s incredible to have the folks in our community step up and help each other doing this mitigation work in advance of what we know will be another very difficult fire season,” Neguse said. “It underscores the real need for us to take action in Congress in terms of scaling up these efforts and investing in the necessary resources, for example, through our civil conservation corps.”

Neguse has proposed the creation of a 21st Century Conservation Corps. The corps could create hundreds of thousands of jobs and would invest billions in forest reforestation, wildfire resiliency and watershed mitigation efforts, according to a news release from Neguse’s office.

The idea behind the corps is to re-create something similar to Franklin D. Roosevelt’s New Deal program and the 1930 Civilian Conservation Corps, which built Red Rocks, roads, trails and campgrounds in Rocky Mountain National Park, according to the release.

As he surveyed the work Saturday, Neguse said the proposal would support mitigation efforts, like the ones seen Saturday, across the state.

The proposal was introduced more than a year ago.

“It’s gained a lot of momentum since, culminating in President Biden including it as part of the American Jobs Act proposal. Our hope is we can see this get across the finish line in June or July,” Neguse said.

In the subdivisions near Mountain Ridge Place and Foothills Ranch Drive just west of U.S. 36, Team Rubicon volunteers worked in an area decimated by the Calwood Fire. The wildfire — the county’s largest, which sparked in October and destroyed 10,105 acres and 27 properties. Twenty-one homes in the Mountain Ridge and Foothills Ranch communities were destroyed by the blaze, according to a Team Rubicon news release.

Among a team of soot-covered volunteers surrounded by blackened trees, Dave LaRivee , an Air Force veteran and a team lead, said they were felling trees and working to rehabilitate and prevent erosion of the hillside.

“We’re trying to make it safe so that the homeowners can come back and rebuild,” he said.

LaRivee said he was glad Neguse got to see volunteers in action.

For his part, Neguse said he was in awe of the work he observed.

“Many of these folks doing this work are first responders and our nation’s veterans, and we owe them a debt of gratitude already,” Neguse said.

Back in Boulder, Neguse sat among the chatter of people enjoying their brunch outside the South Side Walnut Cafe in the Table Mesa Shopping Center. He talked with business owner Xanthe Thomassen about challenges the restaurant has seen throughout the pandemic.

Thomassen said the Walnut Cafe, which was founded by Dana Derichsweiler — Thomassen’s wife, will survive the pandemic, but not completely unscathed. In July last year, challenges from the pandemic forced the couple to close the Super Mini Walnut Cafe in Lafayette.

Today, she said one of the restaurant’s biggest hurdles is finding enough workers to fill positions.

Thomassen had good news to share with Neguse on Saturday, though. She said the restaurant was among those that received a Restaurant Revitalization grant through the American Rescue Plan — part of a stimulus package passed by Congress to help address the challenges posed by the coronavirus pandemic.

While she declined to say how much the Restaurant Revitalization grant was for, Thomassen said it will help provide more security for the restaurant and its future. For the restaurant, which employs roughly 62 people in full- and part-time positions, it will mean more funds for employees and potentially some restaurant upgrades, like better equipment.

In the backdrop of the weekend hum at the Table Mesa Shopping Center on Saturday were signs of efforts to recover, following the March 22 mass shooting at the shopping center’s King Soopers store. Signs that read “Boulder Strong” hung on windows of businesses, and the chain-link fence that bordered the grocery store remained packed with flowers, signs and messages to the victims.

“The community is healing,” Thomassen said. “But, there’s a long ways to go. People have PTSD. My wife had to be here that whole weekend opening, and people were crying. She was absorbing it and realizing that she needs to be focused on her mental health as well.”

Boulder Mayor Pro Tem Junie Joseph and Boulder Councilmember Aaron Brockett were among those who joined the Saturday conversation.

“Of course, it’s been an incredibly hard time with COVID-19, but then add in the tragedy of the shooting on top of it — these businesses need our support so much,” Brockett said.