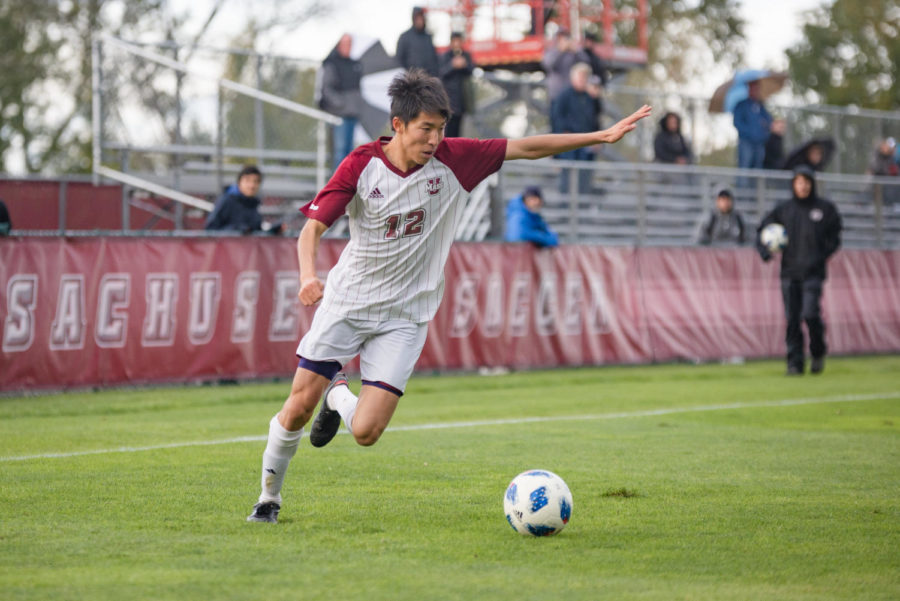 After defeating La Salle 2-1 in its last planned match of the season, the Massachusetts men’s soccer team added another road match to the schedule against No. 25 Virginia Tech. It was a turbulent evening with momentum swinging in both directions, but the Minutemen (7-1-3, 3-1-2 Atlantic-10) held their own against a formidable program. The match ended in a 3-3 draw in double overtime.

UMass started with a lot of energy as graduate forward Filippo Begliardi Ghidini found the back of the net on an assist from junior defender Graham Brenner in the eighth minute. It was Begliardi Ghidini’s fifth goal of the year as his addition to the roster has proven to be crucial throughout the season.

“Filippo has scored goals every season he’s played Division I, so he has a proven track record,” UMass head coach Fran O’Leary said. “He’s a mature guy who’s incredibly disciplined and hard working. He brings a lot more to this team than just goals: his mentality, his maturity, his discipline. He’s a great team player, so I’m delighted that he’s come on the road tonight against a top twenty-five team and scored two goals, totally well deserved.”

From that point on, Virginia Tech (6-6-3, 5-5-2 Atlantic Coast Conference) dominated the first half recording 14 shots to just two from UMass. Hokies sophomore forward Nick Blacklock evened the match on an assist from junior midfielder Chris Little. UMass was fortunate to head to the locker-room with an even score.

Virginia Tech came into the second half with a similar level of energy and dominance. During the 66th minute, freshman midfielder Birkir Eythorsson scored on an assist from senior defender Jacob Bluemler. However, the Minutemen responded quickly with a Nathaniel Cardoza goal coming seconds before the 71st minute.

“When they were on top, I think we managed to keep our shape and stay strong coupled with some fantastic goalkeeping by Marvyn [Dorchin],” O’Leary said. “A game doesn’t stay the same way forever. One team is always trying to wrestle control. We just began to step up our line of pressure and forced them into some turnovers.”

The Minutemen continued to feed off their newfound momentum as Begliardi Ghidini scored again on an assist from senior forward Yosuke Hanya in the 73rd minute to give them a 3-2 lead. It just wasn’t quite enough as Virginia Tech scored seconds into the 77th minute. Junior defender Zane Bubb found the back of the net on a shot that was deflected.

The rest of the match was evenly contested for the most part. UMass outshot Virginia Tech 4-to-3 across both overtime periods, resulting in the 3-3 draw. Now, the Minutemen will wait as they hope to be selected for the NCAA tournament.

“We’ve played eleven games and we’ve lost one of eleven games,” O’Leary said. “Our loss was in double overtime to the conference champions, Fordham. I think we’ve proven we’re a competitive team. We’ve come on the road tonight and competed against a top ACC school who went to the round of 16 last year. I think we’ll definitely be in the conversation and hopefully it’s enough, time will tell. Either way, I’m just incredibly proud of this team.”

Updates will be provided if UMass is selected to play in this year’s tournament. If the season did end tonight, O’Leary will likely receive significant praise for the clear strides that the program has made despite the challenges they’ve faced.