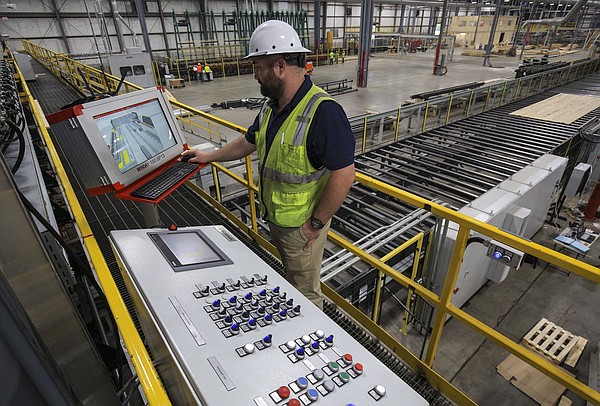 Economic growth continues to show momentum in Arkansas and surrounding states as many sectors move into a post-pandemic recovery heading into summer, according to two new regional economic reports.

The Federal Reserve reported Wednesday that national and regional economic conditions have moderately improved since the bank issued its last Beige Book report in April.

“Many [business] contacts described a situation in which growth in demand for their products or services is outpacing their growth in capacity,” the Fed reported in the the Beige Book report released Wednesday.

The Beige Book summarizes economic conditions for the nation and for the eighth district, which is based in St. Louis and covers all of Arkansas and parts of Illinois, Indiana, Kentucky, Mississippi, Missouri and Tennessee.

“If the capacity was there, I think we would be seeing much stronger growth,” said Charles Gascon, the Fed economist who covers the region.

Economic growth, Gascon said Wednesday, is “constrained by demand coming back much faster than supply.”

The survey of business owners and leaders covers issues such as employment and wages, prices, consumer spending and economic activity across several key sectors.

The Fed report echoes findings from Creighton University, which noted Tuesday that the economy in Arkansas and eight other Midwest states remains strong heading into the summer.

The university’s Mid-America business conditions index for May came in at 72.3, down from April’s record high of 73.9. A score above 50 suggests growth. The survey predicted “very strong growth for the next three to six months.”

“Creighton’s monthly survey results indicate that the region is adding manufacturing business activity at a healthy pace and that growth will remain strong with the overall regional economy returning to pre-pandemic levels in the first quarter of 2022,” said Ernie Goss, the university economist who supervises the report.

The May index for Arkansas decreased to 67.8 from 73.9 in April though business leaders remain optimistic about growth continuing. Wages are rising as businesses compete for workers, the study found.

“According to U.S. Bureau of Labor Statistics, average hourly wages for manufacturing production workers in Arkansas rose a hefty 6.1 percent over the last 12 months,” Goss said. “Both durable goods producers and nondurable goods manufacturers in the state accounted for the very healthy gains.”

The Conference Board also reported Wednesday that businesses are having difficulty finding qualified workers.

The organization found that 80% of businesses hiring industry and manual services workers report difficulty finding qualified candidates, with 25% reporting it is very difficult. This compares to 74% before the pandemic, when 4% reported it was very difficult.

The Conference Board conducted the survey of 230 national human resources executives in April. The board is a think tank that studies national business issues.

“Before the pandemic, industry and manual services workers were high in demand and short in supply. While this changed at the onset of the pandemic, as the economy reopens this trend is resurfacing — and fast,” Frank Steemers, report co-author and senior economist at The Conference Board, said in a statement.

Labor shortages do seem to be the underlying challenge to economic growth for Arkansas and the region, according to the Fed’s Gascon.

“So again it kind of stems back to labor,” Gascon said.

“It’s a tough environment — people that have continued working are just exhausted,” he added. “Those that have been out of work are trying to get back in.”

Nevertheless, Gross Domestic Product could grow 6% to 8% if the challenges level out, Gascon said.

“There’s a lot of pent up demand out there. If we can get some of these supply issues worked out … we would see growth rebound more quickly,” he said. “But the fundamentals are there for steady sustained growth even if the supply issues are not worked out as quickly as hoped.”