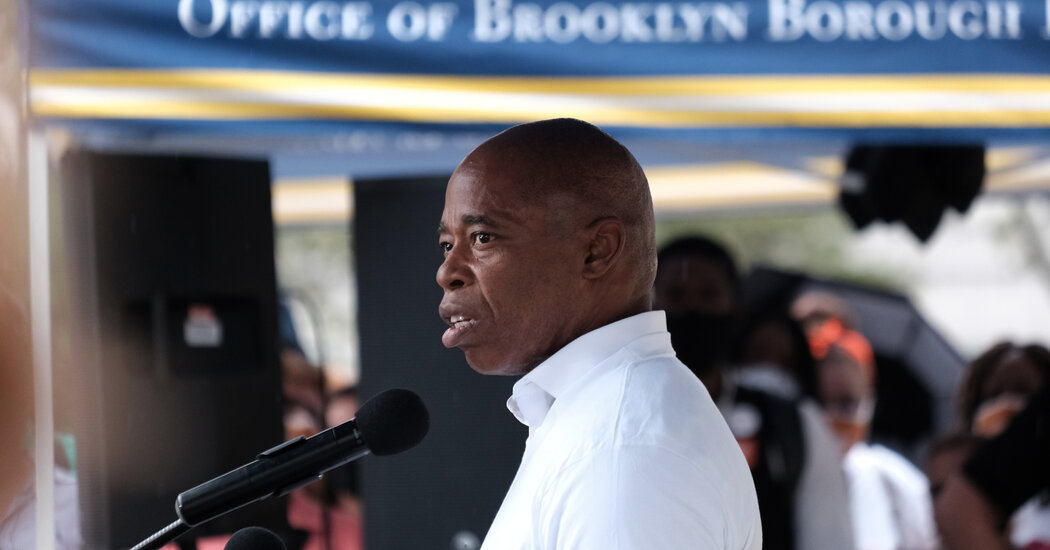 After nearly eight years of a strained and periodically hostile relationship between the mayor of New York City and its business community, the city’s likely next mayor on Monday delivered a clear message: He wants a reset.

“New York will no longer be anti-business,” declared Eric Adams, the Democratic mayoral nominee who is almost certain to win November’s election, in a speech at a business conference in Manhattan. “This is going to be a place where we welcome business and not turn into the dysfunctional city that we have been for so many years.”

In many ways, Mr. Adams and Mayor Bill de Blasio have found political common ground, and Mr. de Blasio was thought to favor Mr. Adams during this year’s primary. But Mr. Adams’s brief remarks on Monday underscored what may be one of the most consequential differences between the de Blasio administration and an Adams mayoralty: a significant shift, in tone and approach, when it comes to dealing with the city’s big-business community.

Mr. de Blasio has, at times, fostered close ties to the real estate community, but he based his campaign on addressing the city’s widening inequity, saying that New York had become a “tale of two cities.” He has also downplayed the need to bring back wealthy New Yorkers who fled during the pandemic.

Mr. Adams also ran on a message of combating inequality and was embraced by key labor unions. But his main focus was on combating crime, which also happened to be a primary concern of the city’s business elite. And he took a far warmer approach to engaging the business community, becoming a favorite of New York’s donor class, with whom he has spent much of the summer, while earning skepticism from the left. Publicly and privately, he has pledged to travel to Florida to bring erstwhile New Yorkers home.

His remarks on Monday, focused on fostering deeper partnerships between New York City and the business community, came at the SALT Conference, held at the Javits Center and overseen by Anthony Scaramucci, the onetime Trump White House communications director. The schedule promised appearances from two hedge fund billionaires who were principal backers of a super PAC supporting Mr. Adams’s candidacy: Daniel S. Loeb, a prominent charter school supporter, and Steven A. Cohen, the owner of the Mets.

Mr. Scaramucci, a Wall Street veteran, donated $2,000 to Mr. Adams’s mayoral campaign. Over the weekend, former Mayor Michael R. Bloomberg, who got on poorly with Mr. de Blasio, released a direct-to-camera video noting his support of Mr. Adams, who is facing off against Curtis Sliwa, the Republican candidate, in the general election.

“As a candidate, Eric Adams has shown ambition and political courage,” Mr. Bloomberg said in the video.

In his speech, Mr. Adams, the Brooklyn borough president, urged employers to collaborate with the city on a common job application, part of a suite of proposals aimed at boosting the city’s economy and combating unemployment and underemployment.

“I’m proposing an unprecedented partnership between city employers and the city itself to make those connections and create one common application, one job application, to field all of the jobs you have available in this city,” he said. “New York wants your jobs and we want to build them.”

Mr. Adams, a former police captain, also reached for a slogan that powered his primary win — “the prerequisite to prosperity is public safety and justice” — as he argued that priorities like reducing gun violence are vital aspects of reviving the city’s economy, a message that has long resonated with business leaders.

And he ticked through a list of other goals, from bolstering community health centers in underserved neighborhoods and efforts to be “the center of cybersecurity” and self-driving cars, to investments in green jobs, to improving childhood nutrition and offering more affordable child care.

“Today, you choose New York,” Mr. Adams told the crowd. “And we want to choose you.”

On Monday, Mr. de Blasio was asked about Mr. Adams’s contention that New York will no longer be anti-business and “dysfunctional.”

“I’m not going to take a couple of lines out of context,” the mayor replied. “Obviously, this is a city that has done so much to work with our business community.”