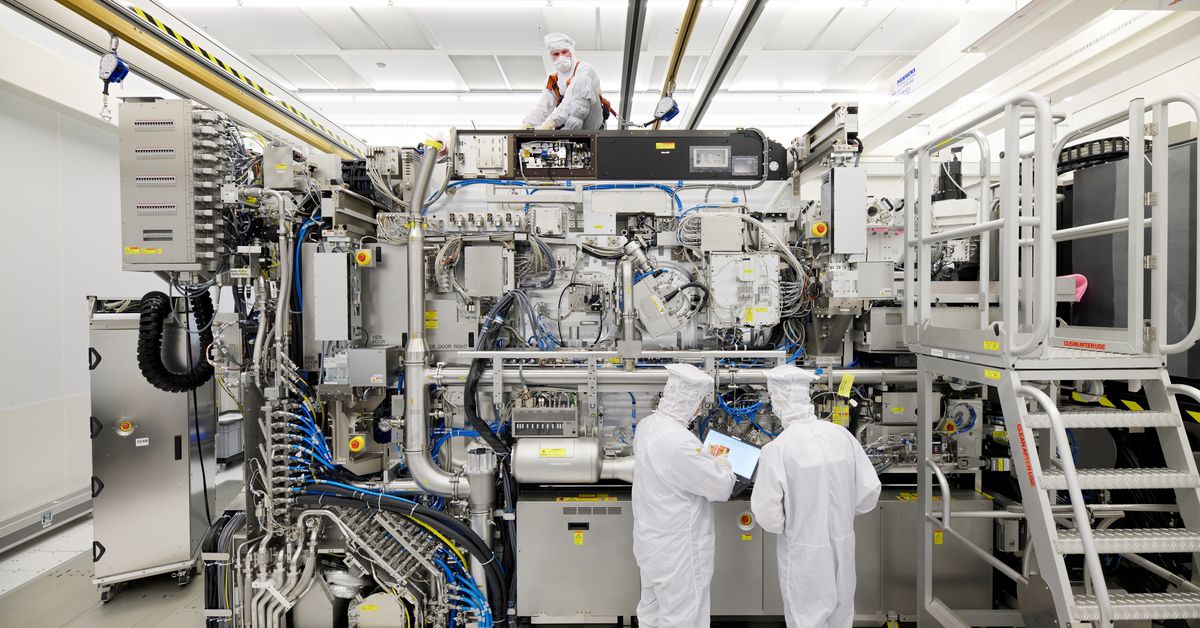 LONDON, Sept 30 (Reuters Breakingviews) – Europe’s largest technology company can weather a cold war between China and the United States. ASML (ASML.AS) has grown into a $310 billion behemoth by making machines that let semiconductor makers print miniscule chips. On Wednesday, the Dutch group said it expects sales to grow 11% a year until 2030. The drive by countries to secure their own chip supplies could even provide a boost.

From its base outside Eindhoven, birthplace of the Philips (PHG.AS) electronics empire, ASML has become a vital cog in the global chip-supply chain. Its flagship product, which costs up to 200 million euros, uses lithography to print features with a width of less than 10 nanometres, 10,000 times thinner than a human hair. The machine’s lasers pulverise droplets of molten tin to produce extreme ultra-violet (EUV) light with a very short wavelength. This then reflects off mirrors so smooth that if enlarged to the size of Germany, the biggest bump would be just 1 millimetre high. That allows for ever-more sophisticated designs of chips for smartphones and other devices.

After false starts and delays, production of these machines is ramping up. Chief Executive Peter Wennink expects deliveries to double to 70 a year by 2025, when they will bring in around two-thirds of the company’s revenue. Meanwhile, demand for more humdrum chips will also keep expanding as 5G mobile technology starts linking up cars and factories.

If Wennink’s scenario pans out, revenue will reach almost 40 billion euros by 2030, from 14 billion euros last year. That may even be conservative: ASML thinks revenue could be as high as 30 billion euros by the middle of the decade, implying an annual growth rate of more than 16%.

Such expansion supports a sky-high valuation: before this week’s market selloff, ASML shares had trebled in less than two years. The forecast implies earnings per share of 35 euros by 2030, before share buybacks, JPMorgan analysts reckon. In other words, investors are paying a multiple of almost 20 times earnings a decade hence.

ASML is not immune to geopolitical tensions. Under pressure from the United States, the Dutch government is withholding licences to export EUV machines to China. But so-called semiconductor nationalism could also be a benefit: Wennink thinks governments will spend around $150 billion ramping up domestic supplies. That means more facilities, with more ASML machines. A tech cold war could keep Europe’s chip champion running hot.

– ASML on Sept. 29 said its revenue would grow by around 11% a year until 2030 amid booming demand for semiconductors.

– The Dutch company, which makes large machines that use energy beams to map out the tiny circuitry of computer chips, estimated its revenue would grow to between 24 billion euros and 30 billion euros by 2025, with gross margins up to 56%.

– “We feel very comfortable with these numbers,” Chief Executive Peter Wennink said at a presentation to investors, adding that they did not include possible extra demand for chips due to U.S., European and Chinese drives for “technological sovereignty”.