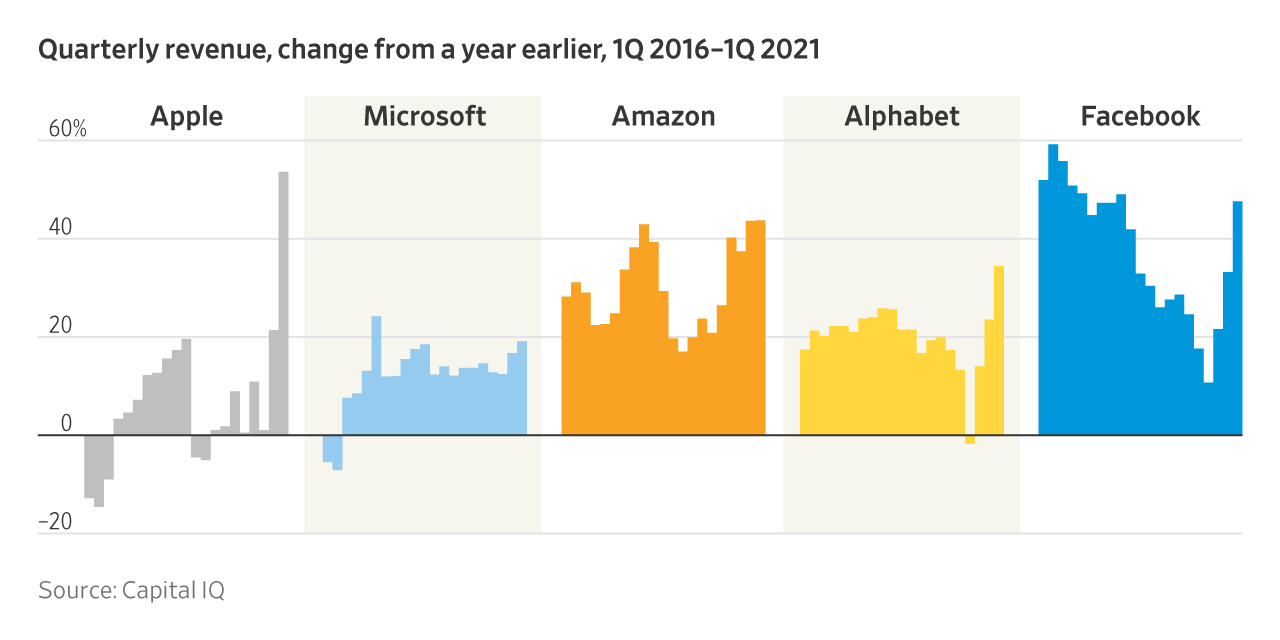 If the pandemic had never happened, the tech industry’s clout likely would have risen over the past year. But the economic effects of Covid-19 have catapulted the tech titans to heights few might have imagined possible a year ago.

The past week of quarterly financial results from Apple Inc., AAPL -1.51% Microsoft Corp. MSFT -0.13% , Amazon.com Inc., AMZN -0.11% Facebook Inc., FB -1.34% and Google-parent Alphabet Inc. put that dominance on vivid display. Each of these companies—already juggernauts pre-pandemic—recorded revenue growth near or above its fastest pace in years.

The quintet set records for sales and profits. Revenue at Apple, the world’s most highly valued company, jumped 54% to the highest level it’s ever hit for the first three months of the year. Amazon logged its fourth straight record quarterly profit—a stretch when its total earnings exceeded those of the previous three years combined.

“Over a year into the pandemic, digital adoption curves aren’t slowing down. They’re accelerating,” said Satya Nadella, chief executive of Microsoft, whose revenue rose 19% in the latest quarter.

The stock market gives a glimpse of just how enormous these companies have become in this extraordinary period: Combined market value for the five Big Tech companies is now over $8 trillion, accounting for nearly a quarter of the total value of the companies in the S&P 500. That is nearly double the percentage five years ago.

Here’s a closer look at the big five, by the numbers:

From January to March, Apple sold $47 billion in iPhones. That was a 66% jump from a year earlier, thanks to new models with next-generation 5G technology. Consumers spent more on the premium iPhones, too, with the average retail price in the U.S. up $52 from a year earlier to $847, according to data from Consumer Intelligence Research Partners LLC.

That’s almost double the year-ago figure, and up from around 20 million in November 2019. Mr. Nadella has said the pandemic accelerated adoption of a range of digital tools, benefiting its operations from business software to cloud-computing to videogames.

The company hired at a brisk pace to meet pandemic-induced demand for essential goods and shorten delivery times. Amazon is now the country’s second-largest non-government employer after Walmart Inc., and it said this past week it is hiring for tens of thousands of positions across the country.

Advertising revenue grew 49% in the latest quarter at YouTube, the video arm of Google.

YouTube became the nation’s entertainment hub during a stay-at-home year, attracting so many viewers that its ad sales hit $6 billion in the quarter, just 16% less than Netflix Inc. generated for the period. Google squeezed more money out of brands with new ad formats that enable direct purchases within YouTube during commercials.

Facebook, Instagram, Messenger or WhatsApp were used at least once by 3.45 billion people within the last month.

That’s up nearly a sixth from the 2.99 billion figure a year earlier. As people stuck at home lived more of their lives online and sought out more information and interaction, the company’s seemingly ubiquitous reach grew even further.

Appeared in the May 1, 2021, print edition as ‘In Tech, There’s Regular-Big And There’s Pandemic-Big.’