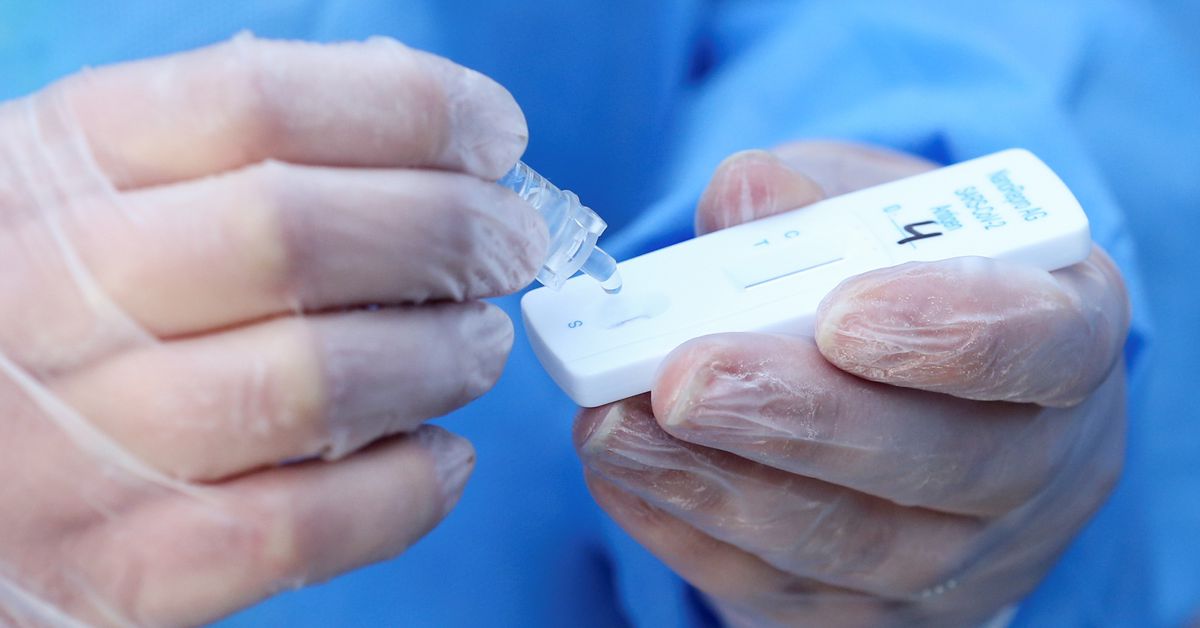 A medical worker performs an antigen test at a COVID-19 in Karlsruhe, Germany, March 4, 2021. REUTERS/Ralph Orlowski

High-quality antigen tests are the primary diagnostic tool for detecting active infection in poorer settings where molecular testing is not available, the global alliance for diagnostics FIND and health agency UNITAID said in a statement.

Agreements have been signed to transfer know-how from U.S.-based diagnostics company DCN Dx to WAMA Diagnóstica in Brazil, and from Bionote and Britain’s Mologic — known for the development of the clear blue pregnancy test — to DIATROPIX of the Institut Pasteur de Dakar, the statement said.

It announced a separate partnership for commercialisation and distribution between Xixia Pharmaceuticals, a South African subsidiary of the generic drugmaker Viatris (VTRS.O), and Guangzhou Wondfo Biotech Co Ltd (Wondfo) .

“Expanded production capacity in local and regional hubs is critical to ensuring that healthcare providers in low- and middle-income countries can implement effective testing strategies to contain the spread of the virus,” said UNITAID spokesman Herve Verhoosel.

WAMA Diagnostica is expected to generate test volumes of 2 million per month, with a ceiling price of $2.00 per test, he said.

The partnership between Wondfo, based in Guangzhou, China, and Xixia Pharmaceuticals, has the potential to produce 144 million tests per year at a ceiling price of $2.50 each, he added.

In Senegal, DIATROPIX will seek regulatory approval for the tests transferred from Mologic and Bionote and commercialise them under its own brand, aiming to make 2.5 million tests per month in 2022, the statement said.

Some 144 countries will be eligible for procurement through the ACT-A (Access to COVID-19 Tools Accelerator) scheme, it said.