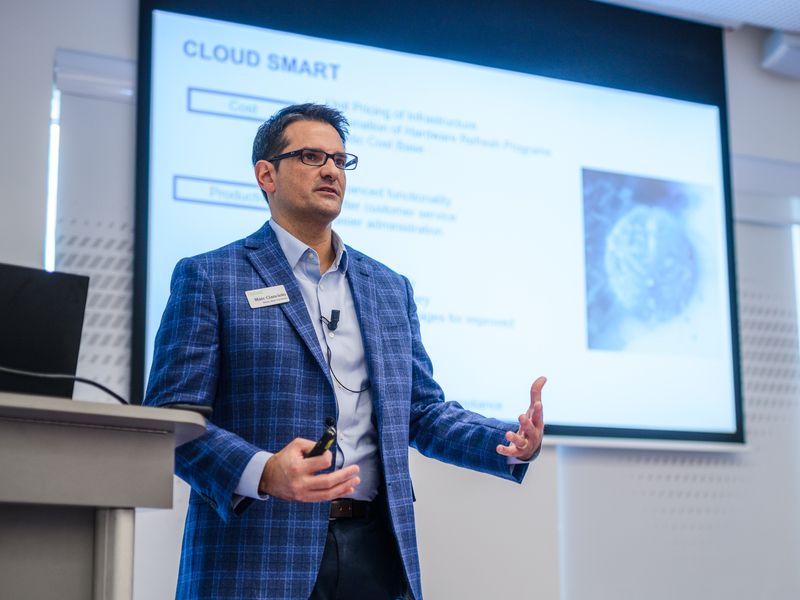 About a quarter of Hyland Software’s customer base exists outside the U.S., with the content service provider bringing the same go-to-market offerings internationally as it does stateside.

“Operations are represented across all functions of a business — sales, marketing and customer service,” said Ed McQuiston, executive vice president and chief commercial officer at Hyland. “We’ve also got folks (overseas) doing R&D and tech support, and have HR and back office operations.”

For Hyland and other Northeast Ohio middle market enterprises, the economic climate in the ongoing fallout of COVID-19 is creating new challenges for international growth. Companies are delaying expansion plans, at the same time embracing a remote global workforce model that had already been gaining traction prior to the pandemic.

With the virus crisis receding in some parts of the world, local mid-sized firms are once again casting their eyes overseas, even as they adapted over the course of the pandemic to new ways of doing business beyond America’s borders.

Park Place Technologies, a Mayfield Heights data center hardware maintenance company, postponed the opening of a new sales arm in India earlier this year due to that country’s COVID-19 struggles.

“We had people hired, we had an office and training set up, and had to cancel all of those plans,” said president and CEO Chris Adams. “Now we’re training remotely until our employees can come back. But it affects the office there, because this is a remote location that we were just standing up. You want people in one environment with concentrated training. That’s definitely one example of how the pandemic has impacted our success.”

International revenue derives from both on the maintenance contract side and the selling of network gear, refurbished servers and other hardware. Of the company’s 2,300 employees, anywhere from 600-750 are located overseas.

The firm, which doubled its size in November 2020 through acquisition of data center equipment supplier Curvature Inc., has physical locations and teams of engineers in Europe, Asia and South America. As some employees in these areas cover multiple countries, travel restrictions required further modifications when providing top-shelf customer service.

Adams said, “We had a business continuity planning team that kept track of all our global locations and the corresponding restrictions. There were even a few locations where the environment was in hard lockdown with no nonessential travel. In those instances, we notified customers that our support would have to be a combination of remote/best effort until conditions changed.”

As the pandemic dissipates in regions where vaccines are readily available, business travel is expected to once again be a facet of middle-market operations. According to Chubb and the National Center for the Middle Market (NCMM), approximately 29% of middle market organizations had employees traveling internationally as of the last quarter of 2020. Another 41% planned to get employees back on the road this year.

Pre-pandemic, Hyland executives visited customers in significant markets including Europe, while sending international staffers across borders on software implementation jobs. McQuiston said virus-spurred shutdowns had a “leveling effect” for all businesses, making the transition to remote work less stressful than it could have been.

“All of our customers and partners were in the same scenario,” McQuiston said. “From a services standpoint, we saw improvement in productivity from not having to travel, because we had more time to focus on the customer. Everyone had to perform processes that they were previously doing manually. They had to become much more digital, which ended up being a positive.”

Even with vaccinations on the rise, Hyland isn’t seeing an overwhelming push from global clients about getting back on site. Companies that went remote intend to stay that way for the near future, a scenario that in 2020 saw Hyland raise its bookings 14% over the previous year. A worldwide emphasis on cloud computing had both Hyland customers and client constituents — students, government officials, hospital patients and others — using the company’s OnBase flagship software.

McQuiston said he would be surprised if global business travel in general returned to 50% of what it had been before March 2020.

“Platforms like Zoom have become a staple to how business gets done, when before it would have been disrespectful to do a video call,” McQuiston said. “I have a meeting today with a global partner in Japan. I would’ve taken that in person in the past, but now we’ll get on Zoom for 45 minutes.”

Vitamix felt COVID’s impact upon global closures of the restaurants and other hospitality markets to which it sells its high-performance blenders. The Olmsted Falls company has sales staff in Germany, Italy and the United Kingdom, along with China, Korea and Australia. A distribution center in the UK temporarily closed due to that region’s high case counts.

“We never left our customers in those markets —things were just put on hold,” said Heather Hennekes, senior human resources director at Vitamix. “We’ve kept those relationships warm for existing customers and those in the pipeline.”

Vitamix is currently making inroads into China, banking on the country’s large population and a strategic investment with a new partner. The company is also planning a small number of international trips over the next 90 days, with territorial sales staff ready to meet customers barring virus surges or restrictive quarantining rules.

“We’ve continued to monitor the states and countries where we operate,” Hennekes said. “From day one, the thing that’s been most important to us is that people stay safe.”

Park Place CEO Adams hopes to tour the company’s new Ireland location this fall, should the country lift its 14-day nonessential traveler quarantine by then.

“It’s good to sit down and listen to employees — that helps us calculate our business based on the feedback we get,” Adams said. “Americans make the mistake of just trying to replicate business overseas, but it’s a different culture. You don’t learn all the little things over the phone.”