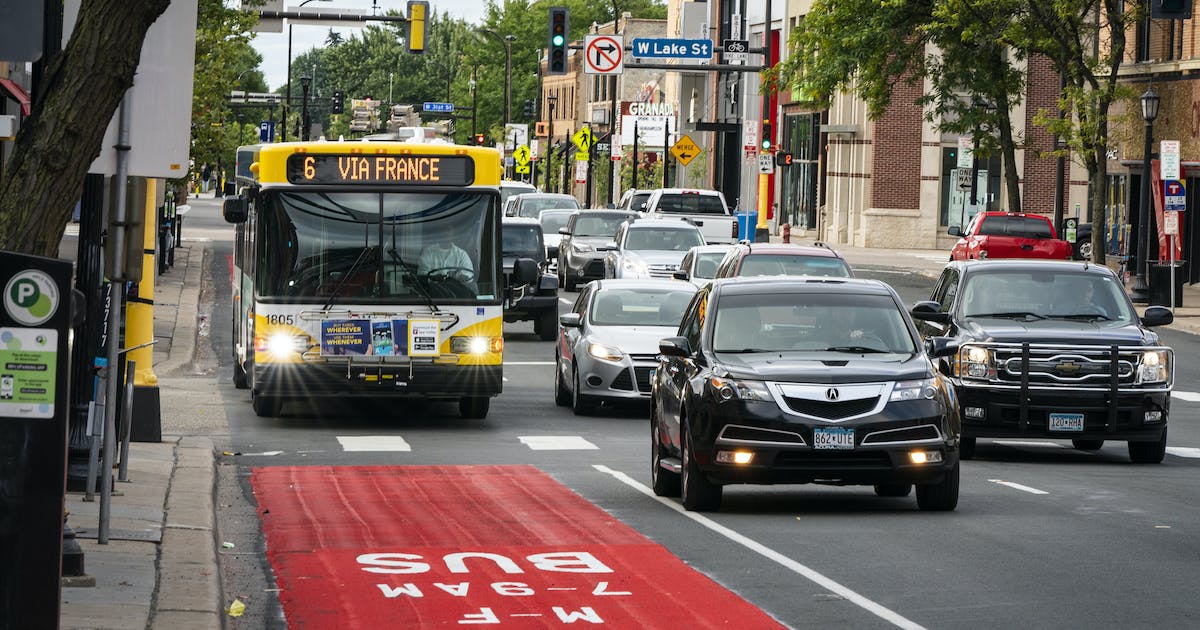 A battle over on-street parking is underway in the Uptown area of south Minneapolis, where the city plans to give Hennepin Avenue its first major makeover since 1957.

The city is exploring two options for upgrading Hennepin from just south of the Walker Art Center to Lake Street. Both designs would slim the bustling corridor to one travel lane in each direction and bring amenities such as wider sidewalks, dedicated bus lanes and possibly room for bikes. To fit it all in, the city would eliminate about 90% of curbside parking spots.

“It would be tragic for so many of those businesses,” said Jill Osiecki Gleich, executive director of the Uptown Association, which produces the annual Uptown Art Fair. “There does need to be improvements for pedestrians and access to the Greenway [for bicyclists], but not sacrifice of all that street parking.”

The city is accepting feedback on the $32 million project through April 16.

Jessica Burge, who owns the Cafe Meow coffee shop and lounge at 23rd and Hennepin, doesn’t like what she sees in either design.

“Over 90% of customers who come park directly in front or across the street,” she said. Not having parking outside her front door “would be 100% devastating. They won’t come.”

Burge said she and some of her neighbors with storefronts on Hennepin think all the upheaval would be too much, considering they are already struggling with the pandemic and fallout from civil unrest related to the death of George Floyd. Competition from Amazon has not helped business either.

Todd Smith, who owns a building that houses a couple of businesses near 28th and Hennepin, said off-street parking is already tough to find, and eliminating parking on Hennepin would only make things worse. He said having convenient short-term parking is critical for pickups and drop-offs.

“I fear that removing parking access to businesses will make it impossible to run successful businesses on Hennepin Avenue,” he said. “It’s hard to buy a futon and take it home on my bike.”

Both business owners are among hundreds who have signed a petition that the Uptown Association has put on its website encouraging the city to take more time to study the impact that a new Hennepin would have on businesses and the neighborhood.

Osiecki Gleich points to retailers negatively affected when they lost curbside parking in 2018 when the segment of Hennepin between Lake and 36th streets was redone.

In a lesson learned, Hughes said the Public Works Department this spring plans to restore some on-street parking between Lake and 31st. The city is also looking at implementing ways for motorists to be able to stop to load and unload, and enacting other traffic calming strategies as part of an interim treatment until the city comes up with a permanent modification.

The larger project, funded with federal, state and city dollars, is being shaped by the city’s Vision Zero initiative, Transportation Action Plan and Complete Streets policy. It has already been pushed back a year, to 2024, Hughes said. The city will use feedback from the survey to make adjustments before presenting final plans to the City Council in August.

“We are fine-tuning designs on a block-by-block basis,” Hughes said. “We have worked with the Uptown Association. We are listening.”

Follow news about traffic and commuting at The Drive on startribune.com. Got traffic or transportation questions, or story ideas? E-mail [email protected], tweet @stribdrive or call Tim Harlow at 612-673-7768.