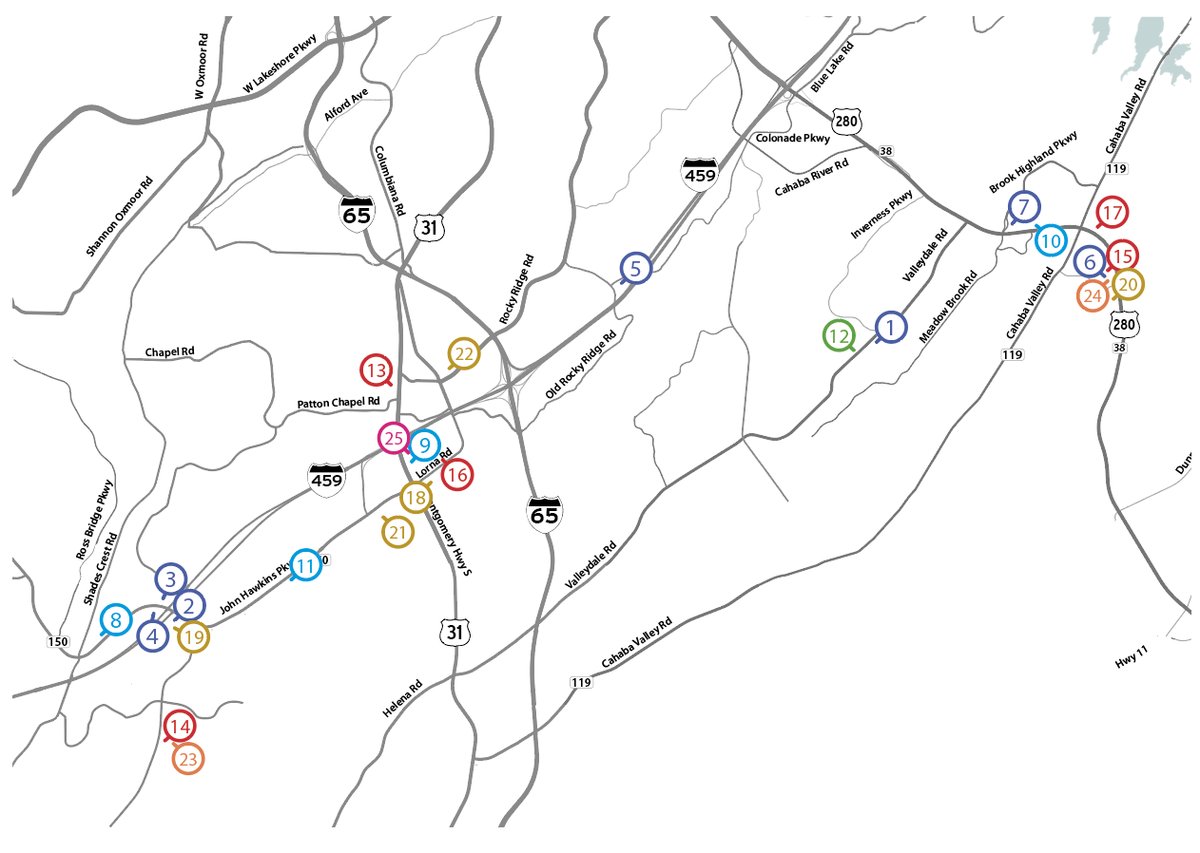 3. Taco Bell has opened on an outparcel at 5622 Grove Blvd. in the The Grove shopping center. tacobell.com

5. The new Dunkin’ opened at 2415 Acton Road on April 13, offering coffee, doughnuts and other treats to nearby residents. dunkindonuts.com

9. The Hoover City Council on April 19 gave approval for Whataburger to build a drive-through restaurant on the spot currently occupied by Pier 1 Imports in the Riverchase Promenade shopping center. whataburger.com

10. Ruby Sunshine, a New Orleans inspired all-day brunch restaurant, is planning to open a new location at 5243 U.S. 280. It also has a location in Homewood’s Edgewood neighborhood. rubysunshine.com

11. The Juicy Crab restaurant chain, which started in Duluth, Georgia, in 2015, plans to open a location in the former Logan’s Roadhouse at an outparcel in the Colonial Promenade Hoover shopping center at 2740 John Hawkins Parkway. As of mid-April, there was one location of The Juicy Crab in Tuscaloosa and others planned in Hoover, Dothan, Mobile and Montgomery. Altogether, The Juicy Crab as of mid-April had 32 restaurants in Alabama, Florida, Georgia, Mississippi, North Carolina, Ohio, South Carolina, Tennessee and Texas and 15 more listed as “coming soon” on the company’s website, including the four new ones coming to Alabama. thejuicycrab.com

13. Hoover City Council on April 5 approved a license for Plenty of Vino to sell beer and wine for consumption off the premises at 1650 Montgomery Highway in the Hoover Square shopping center.

14. Construction is underway for the new Brock’s Gap Brewing Co. brewery and tap room that will be at the corner of Stadium Trace Parkway and Mineral Trace, right next to the Hoover Metropolitan Stadium parking lot.

16. The Hoover City Council on April 19 gave Delta Investments and Development approval to convert the Riverchase Car Wash site at 3641 Lorna Road into a convenience store and gasoline station.

17. D&G Development has begun construction on a new 12,600-square-foot strip shopping center in the 5400 block of U.S. 280, next to Tattersall Park. The center is supposed to include Anatole’s bike, skate and surf shop, Dunkin’ doughnut and coffee shop, Five Guys Burgers & Fries and Jersey Mike’s Subs. 423-429-1107, dg.dev

18. Veterinarian Alexandria Sheppard has joined Banfield Pet Hospital inside the PetSmart at 3780 Riverchase Village, Suite 300. Sheppard graduated from Hoover High School in 2009 and obtained a bachelor’s degree from the University of Alabama at Birmingham in biology, chemistry and marine science in 2013 and a master’s degree in public health and doctorate in veterinary medicine from St. George’s University in Grenada. She joins Dr. Brett Earley at Banfield Pet Hospital.  205-682-9893, banfield.com/veterinarians/al/hoover/hvr

23. Global Services, a screenprint, embroidery and logo company at 512 Mineral Trace in the Trace Crossings community, celebrated its 28th anniversary in March. The company was formed in Bluff Park  in 1993, moved to Pelham in 1998 and back to Hoover in 2006, co-owner Navdeep Harang said. 205-987-7787, shivawear.com