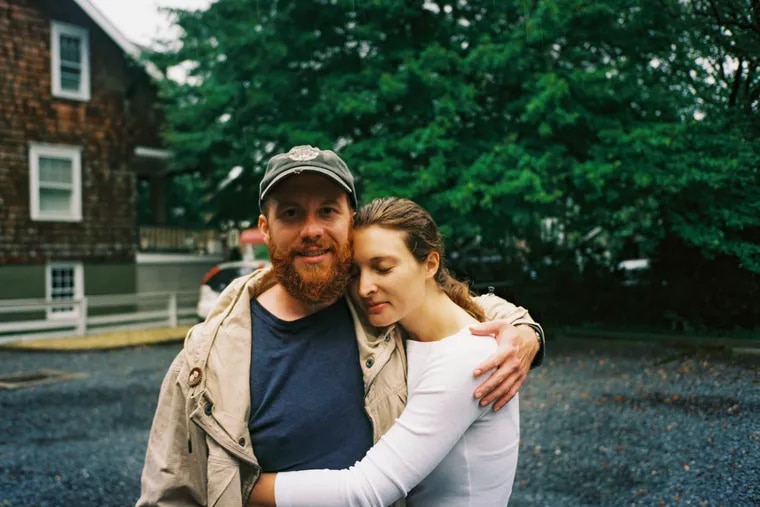 Their overlapping networks finally came together at a 2013 Philly Tech Week event. Stacey was an operations analyst working on vacant property strategy for the city. Brian cofounded Technical.ly — Tech Week’s host. His business partner kept saying that Brian really needed to meet Stacey Mosley, and after their short, introductory chat, Brian knew he was right.

“Anyone would say the first thing they notice about Stacey is how smart she is,” Brian said. “She’s also easygoing, her approach to life is very thoughtful, and obviously, she’s beautiful.”

It was the second time they spoke that the butterflies invaded Stacey’s stomach. She was meandering around the Science Festival on the Parkway when she saw Brian, who was running a Tech Week pop-up at the event. “He was so openly excited to see me,” she said. “He started explaining what everything was and showing me the exhibits. I felt very much included, close to him, and welcomed in his world.”

Their first date was at Fairmount’s La Calaca Feliz and they’ve been together ever since.

“She sees the beauty in things,” Brian said. “She had spent her career up to then working with vacant property, but I don’t think she sees empty lots. I think she sees potential. And that worldview is expressed in everything she does.”

Their first extended trip together — a weeklong bicycle trip from Pittsburgh to Washington — showed just how well aligned they are. They packed gear, clothing, and food, and camped out each night. Such trips have long been one of Brian’s favorite things, but this was the first for Stacey. “Stacey was onboard, even though she had never done a bike trip before, and it’s a lot to ask of anyone,” Brian said.

“We had to bike through a thunderstorm, which forced us to work together in a really basic way,” said Stacey. It was her favorite trip, ever.

In 2014, Stacey bought a Callowhill condo and Brian moved in.

In late 2015, Stacey, who is now 34, launched her own business, Stepwise Analytics. “I knew that I could really rely on him should things get rough and tumble-y — which they did — because as founder and operator of his own business, he would really understand,” she said. “Brian supported me in all of it.”

The next year, Brian, now 37, channeled his love of bike travel into an annual event side business: Bikeout.

The couple took another bike trip of their own in 2018, cycling around Lake Champlain in Vermont and New York. Under a state park pavilion, Brian took Stacey’s hand, spoke about how much they had already been through, and asked her to spend the rest of their lives together.

In 2019, Stacey decided to shrink Stepwise into a part-time venture and find an enjoyable but more stable job. She landed her current role as director of research at Brandywine Realty Trust.

Brian left Technical.ly that same year. Soon, he and a business partner decided to turn Bikeout into a full-time business with events across the country and supportive technology for users. Stacey was happy to give Brian the same type of support he had given her.

The couple had big plans for spring 2020, but a global pandemic changed everything.

Bikeout launched that March — the same month that California became the first state to issue stay-at-home orders. And by late April, it was clear their planned May wedding and celebration for 80 guests at Hot Bed gallery could not happen. The world seemed too uncertain to set a new wedding date, or to keep trying to run a travel-based business.

Their 730-square-foot condo was always a little tight, but seemed to shrink with two people and their mini-schnauzer, Willa, spending almost all of their time in it. Brian and Stacey started unhappily preparing to put the condo on the market.

The couple’s lament over leaving a neighborhood and building they loved would sometimes turn to what they thought were highly improbable fantasies about annexing space from a neighboring unit. But in October 2020, they texted their neighbor on a whim, and he was interested in selling.

“This was something we were both really excited about,” Stacey said.

In May 2021, they were a week away from closing on the new unit when a lawyer told Stacey it would be much simpler and cheaper to add Brian’s name to the old unit if they were married.

She called her fiance and proposed.

“My immediate response was shock,” he said. “We were trying to manage all of this stuff with the sale and combining the two units,” he said. Plus, he had also launched his current business, a digital marketing consultancy. “This would be adding another huge life event, but in a couple of hours I agreed that yes, we needed to do this.”

The couple knew their closest friends and family were vaccinated, and Stacey knew Judge Bradley Moss, who agreed to officiate. The couple received permission to marry on the Rail Park near their home and booked La Peg at the Delaware River Waterfront for their 20-guest reception.

Then, the night before the wedding, a very wet weather forecast made for one last change of plans.

“Luckily, we had an empty condo which we had just closed on,” Brian said.

The couple got ready in their original condo, then they and Willa — who wore a lace collar that Stacey made — walked next door for the ceremony. Stacey also made the chuppah and her veil and assembled the bouquets, boutonnieres, and corsages from grocery store flowers.

Beneath the chuppah held by friends and family, Moss led a ceremony that included both mothers lighting a candle and recitation of the Seven Jewish Blessings. Brian and Stacey each smashed a glass, then everyone drank champagne before heading to La Peg.

Brian and Stacey have collected furniture and a pair of salvaged doors and hired a contractor to knock out part of the wall that separates their two condo units.

Soon after they have established a single space, they hope to warm their newly expanded home with a party for everyone who they wanted at the wedding.