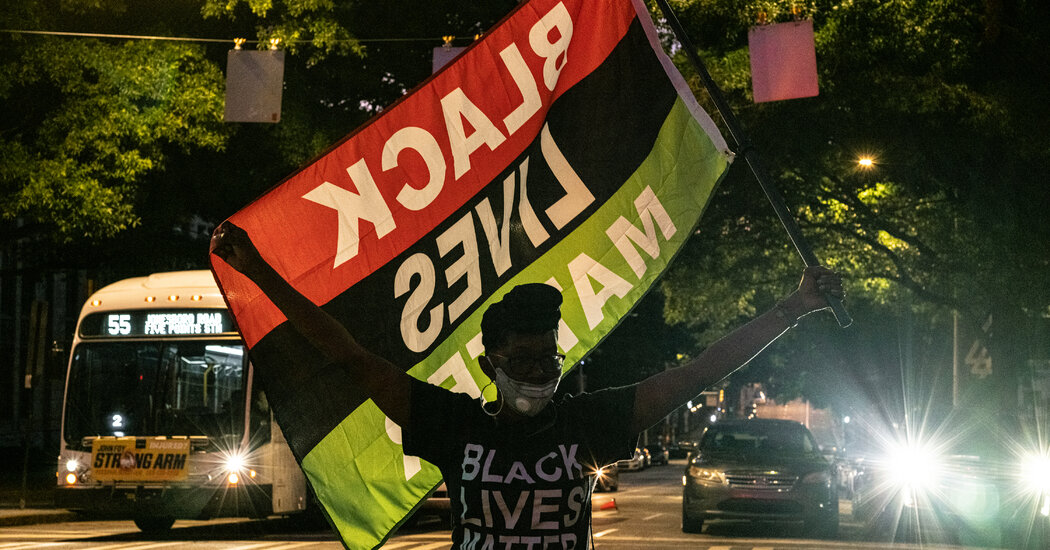 Since President Biden signed a law last week making Juneteenth a federal holiday, there has been no shortage of corporate displays of good will. Google devoted its famous “doodle” to the holiday, and many companies have declared that they will observe Juneteenth as a paid holiday.

With Republicans in state governments across the country introducing bills and passing laws that try to limit the teaching of racism’s role in American history, tech firms and other major corporations have joined Democrats in condemning them.

But what’s actually going on inside these companies? A report released last week by the Conference Board, a corporate research firm and business group, showed that while conversations about confronting race and racism might be on the rise, actual workplace equity isn’t.

The wage gap along racial lines is increasing, particularly “in industries, occupations and locations where the fastest growth in high-paying jobs is taking place,” the report’s authors found. Chief among those industries, they wrote, is Big Tech.

The gap in earnings has widened over the past decade: Black men with bachelor’s degrees earned 24 percent less than degree-holding white men in 2019 — a marked decline from 2010, when the wage deficit was 18 percent. For Black women, the difference in wages with white men was 26 percent — also significantly worse than the number from 2010.

Big Tech has contributed heavily to the trend: While Black people make up 13 percent of the U.S. labor force, just 4 percent of top earners in the tech sector were Black in 2019, less than the already low 6 percent in other industries. At Google, Black employees made up only 4 percent of the work force last year.

Though the tech sector has produced many millionaires over the past decade, relatively few have been Black. “If you look at the percent of Black workers in the tech industry, their share has not grown,” Gad Levanon, the founder of the Labor Market Institute at the Conference Board and the lead author of the report, said in an interview. “If anything, it is shrinking.”

A separate study last year by RateMyInvestor examined nearly 10,000 tech entrepreneurs and 135 venture capital firms. It found that among founders of tech projects who had received venture funding, just 1 percent were Black.

While tech firms have taken steps toward increasing transparency on racial inequities in their workforces, particularly since the spike in Black Lives Matter organizing in 2014, they have taken few tangible steps to fix the problem, said Y-Vonne Hutchinson, a workplace diversity expert and the founder of the diversity and inclusion firm ReadySet.

“There has been plenty of opportunity for tech to self-regulate since these conversations have started in 2014 — it just hasn’t done a good job,” Ms. Hutchinson, whose forthcoming book is called “How to Talk to Your Boss About Race: Speaking Up Without Getting Shut Down,” said in an interview.

“We’re still seeing incredible disparity — and in some cases, decreases — in representation at the managerial and executive levels at tech companies,” she said. “And that for sure is driving the racial wealth gap.”

Still, this gap hasn’t been a major point of inquiry during any of the high-profile hearings recently in which tech chief executives have testified before Senate and House committees. Ms. Hutchinson said that with bipartisan conversations picking up in Washington about regulating the tech industry and antitrust enforcement, what’s been missing is an accompanying focus on advancing racial equity.

A member of the Institute for Global Law and Policy at Harvard Law School, Ms. Hutchinson said that the Biden administration had an opportunity to enforce anti-discrimination protections through the Labor and Justice Departments.

She added: “But we really stop short when we look at: What protections do we have for workers and tech companies, and how far are we willing to go to enforce anti-discrimination legislation?”

Ms. Hutchinson called for more “boots on the ground to review claims,” pointing out that “the enforcement arms at the Department of Labor have been gutted” under the Trump administration, leaving the agency unable to fully consider many discrimination claims.

Not until 2014 did Apple, Facebook, Google and Microsoft begin publishing diversity reports, let alone set hard targets for improvements. Five years later, Wired magazine undertook an investigation to see how much progress the companies had made. It found that Apple, Microsoft and Google had all increased Black employment companywide by less than 1 percent.

There are also stark gender divides at tech companies, with degree-holding white women making 19 percent less than white men with bachelor’s degrees. But Wired found that tech firms had enjoyed much greater success during that five-year period in addressing gender imbalances than they had in confronting the racial disparity.

Amazon hasn’t produced diversity reports for its tech team, but its website shows that while 31 percent of its work force last year was Black, just 7 percent of corporate employees and 4 percent of senior leaders were.

These statistics are driven by structural inequities, both in terms of access to education and the personnel and hiring structures at the companies themselves.

The Conference Board report pointed out that one driving factor for a lack of diversity in the tech sector was the fact that many of its top companies had chosen to open their offices in cities and suburbs with relatively small Black populations, including Seattle, San Jose and Austin.

It found that when companies opened new branches in more heavily Black cities, such as Atlanta and Washington, they were more likely to hire Black workers throughout their ranks.

“A lot of the areas of the fastest growth in tech are areas with very few Black people in them, like Seattle or Austin, Texas,” Mr. Levanon said. “So that is making it more difficult for tech companies in those areas — they are almost by definition less likely” to hire Black workers.

Ms. Hutchinson said that at a fundamental level, there was a need to address the role of racism in everything, including educational opportunities and decisions on who is hired and promoted. “When it comes to this report and these discussions in general, we only get to the right policy initiatives if we’re specific about the problem,” she said. “Historically we haven’t been really good, and we haven’t seen a vested societal interest in fighting racism in the workplace. We have to be able to talk about that.”

On Politics is also available as a newsletter. Sign up here to get it delivered to your inbox.

Is there anything you think we’re missing? Anything you want to see more of? We’d love to hear from you. Email us at [email protected].