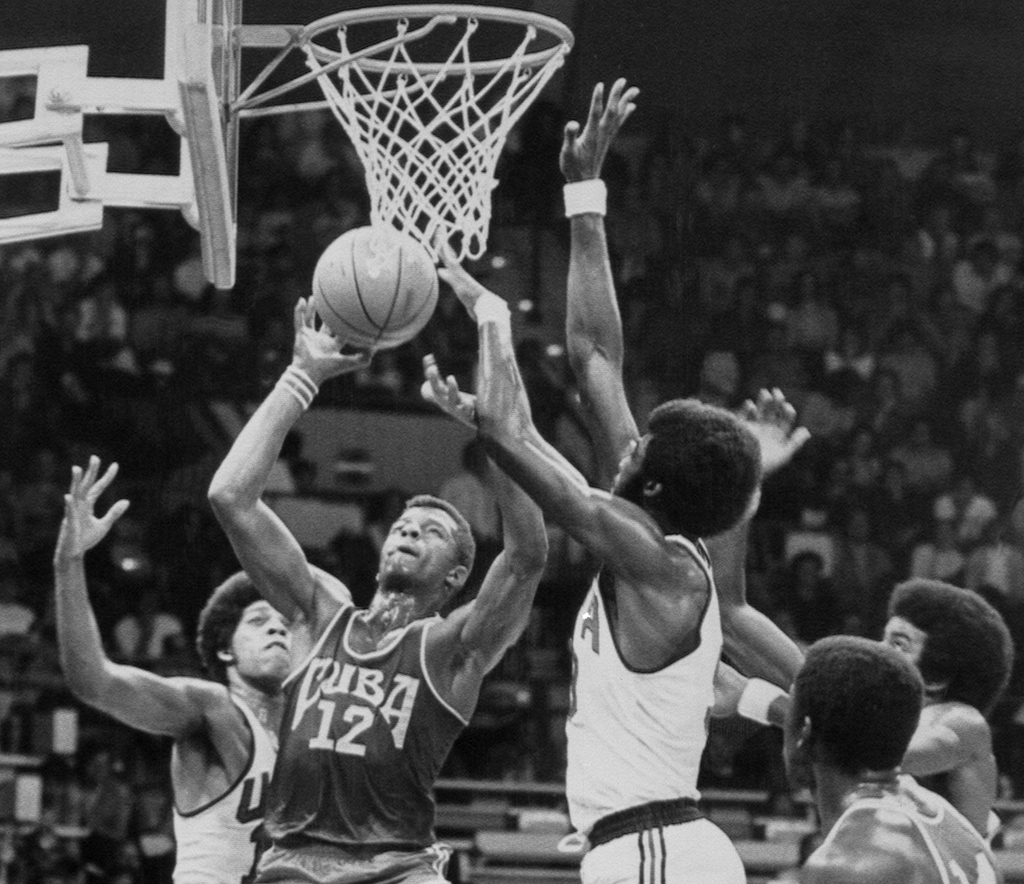 In 1972, the Soviet Union beat the United States in men’s basketball, securing a gold medal and forcing the USA to settle for silver. The closing moments of the final remains one of the most controversial in sporting history. It was the first loss the United States experienced at the Olympics in the decades following the introduction of basketball in 1936 Berlin. The American team always expected to win gold.

The US team claims the win was somehow irregular and still refuses to accept the silver medal. But it was the Cold War, not basketball rules that made the game so fraught. The game highlighted an existential threat to America in an era where the Cold War was being fought on a multitude of cultural fronts; the Soviet Union and the Americans were in a complex athletic arms race. But there was one more team in the mix that year: the bronze medal Cubans.

To this day, it remains Cuba’s only Olympic basketball medal. To residents of the Global North, the country may seem like an unlikely outlier in the Olympic record books. But the bronze win was actually the first of many such successes for Cuba’s world-class sporting program that defied all odds for the better part of a century. The history of post-revolutionary Cuban sports has a lot to teach us about what a socialist model could look like.

In Olimpismo: The Olympic Movement in the Making of Latin America and the Caribbean, Thomas F. Carter described the 1972 Munich Olympics as “the golden era of Cuban sport announc[ing] itself.” The tiny island, the subject of ongoing embargoes and only a decade removed from the failed Bay of Pigs invasion, tied with Finland for eight medals, fourteenth on the table. At the 1976 Summer Games, they took thirteen medals, and then twenty in 1980.

It’s remarkable that Cuba maintained such a high athletic standard in the face of international adversity. Even following the collapse of the Berlin Wall and the sanction-driven economic devastation of Cuba’s “Special Period in the Time of Peace,” the country maintained an extraordinary presence on the global athletic stage. As recently as the Tokyo games, Cuban athletes, now long removed from the golden age, still took fifteen medals.

Fidel Castro was a lifelong athlete. Histories of his sporting prowess often chart alternating narratives of hyperbolic legend or anti-Cuban propaganda. While he was not quite the legendary baseball player he was often mythologized as, Fidel was a promising basketball prospect. Writing in Fidel Castro and Baseball: The Untold Story, Peter C. Bjarkman quotes Fidel observing that basketball provided

valuable indirect training for revolutionary activities . . . a game requiring strategic and tactical planning, and overall cunning, plus speed and agility, the true elements of guerrilla warfare.

Counter to many American accounts, Fidel fought hard to keep Havana’s minor league Sugar Kings MLB club on the island. Its clandestine relocation to Rochester on an away trip (following considerable pressure from the US state department), was likely one of many factors, before the Bay of Pigs, that confirmed the impossibility of a positive relationship with the United States. The incident was also tangible evidence that Cuban sport needed a new path forward.

In 1961, former dictator Fulgencio Batista’s Directorate General of Sports was transformed into the National Institute of Sports, Physical Education, and Recreation (INDER). The elimination of private sports enterprise was sweeping. INDER provided a way, Fidel said, for sports to “serve the revolution.”

The successes of INDER were staggering. In “Punching Above Its Weight: Cuba’s Use of Sport for South-South Co-Operation,” Robert Huish notes that the elite facilities that train Cuba’s best athletes remain accessible to ordinary citizens. Margaret Randall’s Exporting Revolution breaks down the numbers: The island nation supplies one sporting instructor for every 342 Cubans (for context, the United States has about one qualified fitness instructor for every 980 Americans), and the public has access to 11,523 sports centers. Two million Cubans have participated in thirty-eight sports in national and international competitions.

In spite of the scarcity resulting from ongoing sanctions, Huish observes that “it is easy to find children engaged in sport in Cuba.” Children often use rubber balls and pieces of wood in place of baseballs and bats, but the prevalence of sports still stands in stark contrast to many other resource-starved countries. Cuba has transformed sports into a pervasive leisure activity, an attainable profession for naturally excellent athletes, and a way to maintain the health of its population.

American disdain for Cuban sports, oftentimes expressed in charges of amateurism, is tied up with objections to the pay scale within the country’s sports industry. On the question of pay, Cuban baseball manager Higinio Vélez has said:

Amateurs? I suppose you mean that our players are not paid what [baseball stars] Pujols or Soriano earn. But by that standard I assume you are prepared to tell me that schoolteachers and college professors in your country are also amateurs. They also don’t earn the same as top professional athletes or movie stars, do they? No, no. Our players are indeed also professionals.

The elimination of “professional” sports on the island is often misunderstood. Athletes who show promise in school are selected for Cuba’s high-level sports programs and given training, equipment, and coaching. Sports are therefore a full-time profession in Cuban society. This has had the additional effect of creating a racial equality that did not exist before the revolution. Under Batista, sports had largely been the domain of the rich. In cases where darker skinned Cubans and ethnic minorities played, they did so under contracts that were highly exploitative — an issue that still pervades sports in the rest of the world.

Much of Cuban sports operates in a fashion familiar to the United States, particularly in the case of baseball. The Cuban League functions similarly to the MLB, with teams in each province playing in a traditional league structure, largely with local talent, culminating in the championship National Series. Being a fan of the Havana Industriales bears very little difference to, say, being a fan of the Toronto Blue Jays.

Admission to games in Cuba is, however, free.

Cuba borrowed its strategy of exporting its model from American baseball. The country took note of the way MLB executives and the American state used baseball to, as Bjarkman has put it,

disperse sacred American values throughout occupied or subservient foreign outposts in Asia and Latin America, seeing it as a positive tool in fostering American dominance throughout the world, especially on the Japanese, Koreans, and Taiwanese.

Much is made of the fact that Cuba sends doctors all over the world, but less fanfare is given to its support for sporting infrastructure. In 2011, there were six hundred Cuban coaches and trainers operating in over a hundred countries. Cuba has also invited athletes from other countries to the island for free. Once they arrive, athletes take part in high-level training, as well as intensive Spanish lessons and instruction in subjects such as biological sciences and analytic sports analysis. Huish describes this practice as a means for Cuba to address international poverty by “investing in human capital.”

Sports undergird Cuba’s commitment to assert itself on an often hostile world stage. It is through success on the international sporting stage that Cuba fulfills its aspiration to maintain a global presence. It is proud to demonstrate the success of its homegrown athletic culture. As of 2003, Cuba had won 1,492 old medals at the Central American and Caribbean Games and 649 in the Pan-Am games.

Sports have also been a way for Cuba to demonstrate international solidarity with the Global South and other socialist countries. The island nation has participated in international boycotts of the 1984 and 1988 Olympics as a rebuke to Western-bloc foreign policy.

The collapse of the Soviet Union and the ensuing economic crisis during the Special Period in the Time of Peace did little to halt the Cuban sports program. This was likely due to the infrastructure which the country had already set in place for decades. Thomas F. Carter has suggested that Cuba’s intense commitment to success at the Olympics in the 1990s was part of the island nation’s attempt to rebuild its economy. Cuban teams signed contracts with international brands and the country even submitted a pair of failed bids to host the games.

Cuban baseball arguably features levels of talent similar to that of the MLB. This fact has not gone unnoticed in the United States. Recent years have seen the defection of many high-profile Cuban athletes, mostly baseball stars, to the MLB, lured by promises of greater wealth and opportunity. A boutique human trafficking industry has also emerged, which, according to Bjarkman, has left

countless double crosses and dead bodies on the streets of Mexico, and hundreds, if not thousands, of stranded Cuban refugees in Mexican coastal cities like Cancún or Mérida.

The stars that have emerged in the MLB have largely been the result of Cuban goodwill. Liván Hernández and Luis Tiant Jr’s parents were allowed to leave Cuba and see their children when they played in their respective World Series. Cuba has recently made efforts to bring an end to human trafficking in sports and has negotiated deals for athletes to play internationally. These efforts have mostly ended in failure, due in no small part to INDER official’s “lack of understanding . . . about capitalist-style contracts.”

On the surface, it may seem like Cubans being out of touch with the protocols and conventions of global sports business is a failure of education — or, worse, an ignorance of “the modern world.” But it actually demonstrates the incredible success that the Cuban sports project represents. Cuba has successfully created a truly socialist model for sports. The incongruity between the Cuban model and our own — and the resulting incomprehension of its players when faced with sport “officialdom” — is a testimony to its triumph.

Cuba’s bronze medal at the controversial 1972 Munich Olympics may seem like a footnote in sporting history. In fact, it marked a significant step in the country’s unlikely journey in sports and should receive the attention of every socialist. When conservatives ask how luxuries and leisure could be enjoyed under a socialist system, we needn’t be theoretical — Cuba’s sports program provides an example of how this can be accomplished.