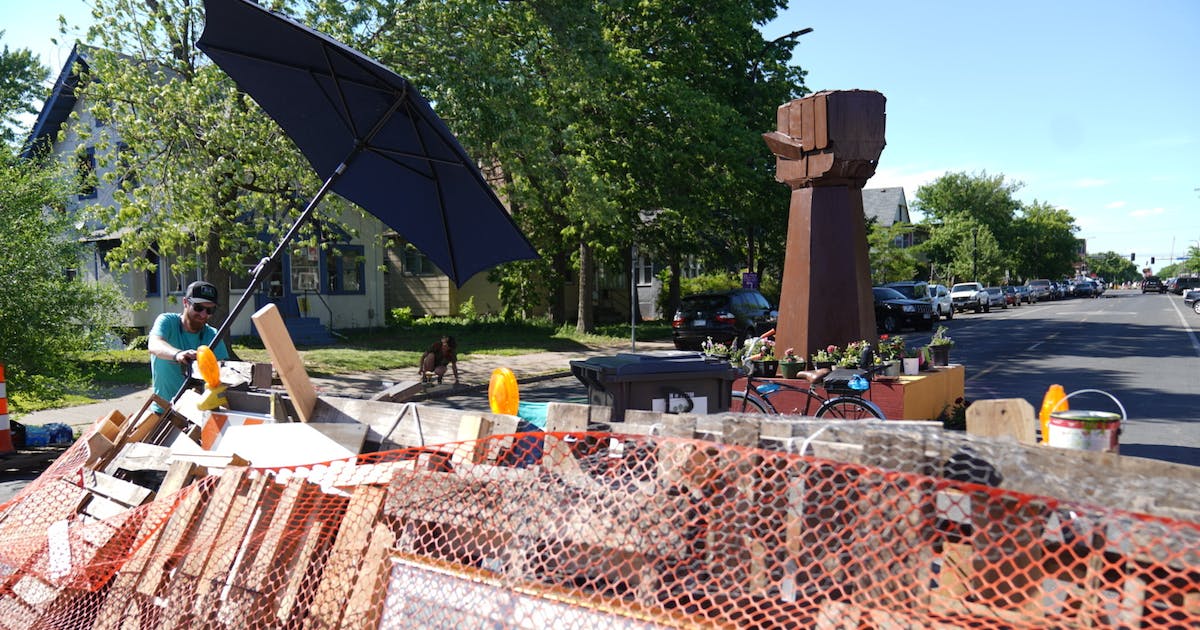 Three enormous fist sculptures stood instead of one at the intersection known as George Floyd Square on Friday, the day after city workers and ex-gang members with the neighborhood security group Agape attempted to reopen the streets.

Other than that, not much changed.

Vehicle traffic still couldn’t pass through after occupiers at 38th Street and Chicago Avenue heaped wooden pallets, trash bags and furniture in the street. Most of the bike lane bollards that workers installed had been torn up. Traffic signs affixed to the intersection had been repurposed for makeshift blockades. A large painting of Emmett Till appeared at the former Metro Transit bus stop.

Protesters had two On Site portable toilets delivered to replace the Biffs portables removed by the city Thursday.

The streets were no more accessible to regular vehicle traffic than they had been for more than a year.

Webb rushed down to 38th and Chicago early Thursday when he heard city workers had begun to dismantle the elaborate flower beds he’d built throughout the square. He negotiated a détente with the city workers, then stayed out fixing the landscaping until late Thursday night.

“You can’t be the villain and the hero,” he said, rebuffing Mayor Jacob Frey’s intentions of reopening the square to traffic and constructing a permanent memorial to George Floyd on the spot where the unarmed Black man died under the knee of a former Minneapolis police officer. “We have our national historical memorial. … The city, they had their chance to build their monument and that was yesterday.”

Frey, who did not say what the city’s next steps will be, said he was never under the impression that the city would succeed in reopening the square in one fell swoop.

“I certainly am open to a ton of different approaches as to how to utilize that intersection, as to how vehicular traffic will be operating on it or not, and to what extent, and to how to make sure that this is a long-term location of racial justice and healing and gathering,” he said.

“The key component is we need to have access. That’s for businesses — by the way, it’s the law, too. We the city are required to provide access for businesses and residents. It’s been made very clear that we have to do that from a legal standpoint, regardless of what your sentiments are.”

Marcia Howard, a leader in the yearlong occupation, said her first reaction to the city opening the intersection was that she was impressed at the ruthless efficiency of what was clearly a preplanned operation. Only later did she get angry. Then she helped rebuild the barricades.

“It was such a beautiful act of defiance,” she said. “The city couldn’t have done a more effective job of reigniting the movement at 38th and Chicago.”

There has been dissension among activists about how to proceed. Some, including Agape Movement members who provided security Thursday morning, want to open it up. Others, such as Howard, want to keep it occupied until all of the protesters’ 24 demands to the city are met.

“We’re not working in the haze of idealism,” Howard said. “We’re working for systemic change that will better the lives of Black, brown and Indigenous people in this system. … This is moving at the pace of justice.”

Steve Floyd, who works with Agape Movement, heard the criticism that his group was too aggressive with protesters who objected to reopening the square, that they were doing the city’s bidding.

“We don’t care about that,” he said. “Those men [in Agape], it’s their community. They grew up in that community. They put the barricades up. The other people came late, as opportunists.”

Thursday morning saw some heated moments, but Floyd, who isn’t related to George Floyd, expected there to be more pushback.

“[The security work] most definitely looked aggressive at times — it had to be,” Floyd said. “We’d bring them out [of the area]: ‘Get back.’ We wouldn’t argue with them. And also media. Media coming in our faces, taking pictures — you can’t do that to ex-gang members that some people are claiming work with police. They don’t work for the police!

“We had a guy challenging us with a hammer — a white guy. And that’s the thing: It’s all white people. Where are the Black people? How come they’re not standing for the Black babies being shot in the head up north [in north Minneapolis]?”

David Collier, visiting with family from Kansas City, Mo., for the first time since Floyd’s death, said the atmosphere of the square felt “heavy.”

Collier said he was ambivalent about the city’s efforts to reopen the street. He sympathizes with the small businesses that oppose the occupation but also believes the spot where Floyd died should be permanently enshrined according to the wishes of his family.

“If the city does it, they’re just trying to cover their own [mistake], and if the community did it … well the community didn’t know George before anything happened to him,” Collier said. “If a memorial is going to be done somewhere, I think his family should have the majority say, because that’s his family.”

Floyd’s relatives include his brothers Terrence and Philonise Floyd, who represented the family during the trial of Derek Chauvin this spring. They have neither endorsed nor denounced the semi-autonomous zone created in their brother’s name but recently seeded the George Floyd Community Benevolence Fund with $500,000 from the family’s civil settlement to benefit businesses and community organizations at 38th and Chicago.

On May 25, the anniversary of Floyd’s death, his sister Bridgett Floyd held a remembrance rally, cookout and concert in downtown Minneapolis through her nonprofit the George Floyd Memorial Foundation.

The George Floyd Global Memorial, a nonprofit created by protesters, organized a simultaneous food and music festival at 38th and Chicago. Floyd’s aunt Angela Harrelson is the group’s board co-chairwoman.

“I was traumatized by the reopening of the street at George Floyd Square. I just cried because it was traumatizing to see what has happened,” Harrelson said Thursday.