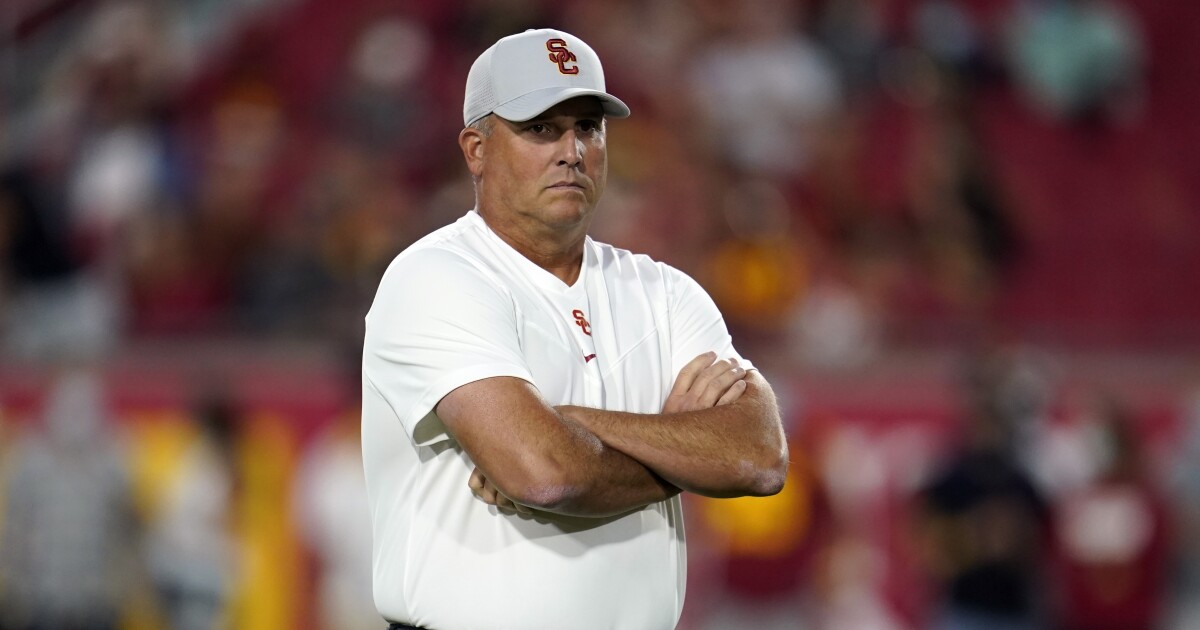 The old adage “Better late than never” is not good enough when it comes to the Clay Helton firing. He may well be one of the nicest people on Earth, he may well have been a terrific assistant coach, but as a head coach, he was one of the worst this program has ever had. His firing Monday came three years too late. As a lifelong USC football fan and decades-long season-ticket holder, what I witnessed against Stanford was one of the worst performances I had ever seen. It was so bad that I left before the end of the third quarter because wasting any more of my life watching this team was not in my best interest. I don’t know what it took for athletic director Mike Bohn to finally wake up, but whatever it was, whatever it took, at least the team can move forward and hire a legitimate head coach and a staff that can provide leadership, structure and a winning program.

Thank heaven Clay Helton was dismissed! For a while there, I’d begun to fear that USC had forgotten the main raison d’etre of major universities, football.

The USC mob finally got their wish and Helton is gone. A big-name coach will take a lot of money, which USC may not have. There is the buyout of Helton and the ton of lawsuits that USC is facing. One of their top donors recently passed away. What to do. Oh, maybe a Gofundme page? Fight on.

What’s the biggest difference between Clay Helton and Ted Lasso? Both proved “you could fill two internets with what I don’t know about football,” but only the former was canceled.

Now that USC has cornered the market on firing head football coaches during the season for various reasons, what will Mike Bohn do to rectify this situation? Most of the USC bigwigs talk big, throw every big name out there in the search for a competent and successful head coach, and what happens? More often than not, the coaches who are wined, dined and romanced to take the Trojans job end up getting a big fat raise at their current job and stay put. USC ends up with their fifth or sixth choice. Mr. Bohn, for once, please hit a home run with your head coach hire. You can’t strike out, because your legacy at USC might be riding on this.

The comments of USC cornerback Chris Steele vividly illustrates the problem with the Trojans. He portrays USC football — and by extension himself — as “hated” — that is, we’re victims of “hate.”

But, in fact, Steele’s play is representative of what USC’s problem really is: abysmally poor and demonstrably undisciplined performance by players under a coach who was obviously, and repeatedly, unable to lead or impose any accountability on his players.

Can we at least say thank you to Coach Helton? He did his job. He took the fall for the Carroll regime and the Kiffin/Sarkisan debacles. He tidied up. Before we shed any tears, we need to remember USC paid him $20 million-plus to do the best he could, with a bare cupboard and onerous sanctions. Now that it’s the wild west with the NCAA, there is no reason not to get back to “just win baby,” no matter how. Best of luck, Coach Helton. You’re an honorable man. But that’s not a prerequisite anymore.

Wow, Bill Plaschke takes pen in hand and USC sends Clay Helton packing before I could finish my morning errands. Who says newspapers are dead?

An uninspiring man, a mediocre coach. Unable to recognize or develop talent. Unable to maintain a winning tradition on Figueroa. Yes, it is time for the Kings to part ways with Todd McLellan.

As a result of UCLA’s week off and recent perfect 2-0 record, the mighty Bruins have climbed to a lofty No. 13 in the current college football rankings. So why tempt fate? Why not cancel the rest of the schedule and, who knows, end up with a top-10 ranking and an undefeated season?

My enjoyment of a super and historic game at Dodger Stadium on Sunday was marred by the lack of masking by people sitting (while not actively eating) around me, by people walking the aisles and stairways, by people in concession lines. From what I can see, there is no enforcement of the masking rules. You also can see that on the videos that scan the audience, even though they attempt to televise only masked attendees.

I will not return to Dodger Stadium unless there are not only signs and announcements about masking policy, but also meaningful enforcement of it.

Bill Plaschke has said on more than one occasion that he feels this Dodger team is the greatest baseball team of all time. Bill Shaikin last week suggests that Dave Roberts may well be the greatest manager of all time. Why don’t we stop playing these meaningless games and go right to the parade?

It was great to see Max Scherzer get his 3,000th strikeout. Max only needs 2,700 more strikeouts, and he will be nipping at Nolan Ryan’s heels.

Every Los Angeles-area edifice that has been built always has a common challenge. As Clippers owner Steve Ballmer and Clipper Nation celebrated the groundbreaking for their new arena, there was no mention of parking. I attended the first Rams home game last Sunday, and it took 1½ hours to exit onto Century Boulevard from the parking lot. The distance could not have been a quarter-mile. Can you imagine some Sunday when a football game ends around 5, and a Clipper game across Century Boulevard starts at 6:30? Don’t think I will be there for either.

The Los Angeles Times welcomes expressions of all views. Letters should be brief and become the property of The Times. They may be edited and republished in any format. Each must include a valid mailing address and telephone number. Pseudonyms will not be used.