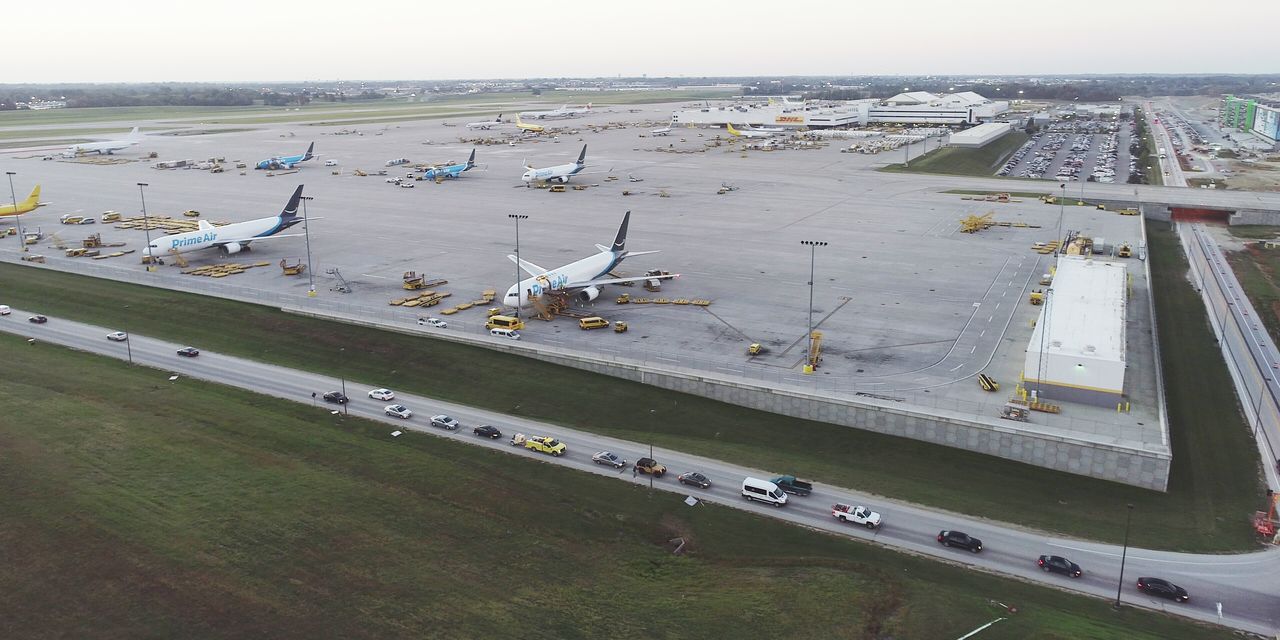 The $1.5 billion air hub, occupying 600 acres along the Cincinnati/Northern Kentucky International Airport’s (CVG) southern boundary, will eventually handle enough goods to fill 75 to 100 flights a day within a few years, Brian Cobb, chief innovation officer at CVG, says. Amazon said it doesn’t discuss future plans, only that the facility will create more than 2,000 jobs and operate 12 daily flights by the end of this year.

“This hub is going to let us to get packages to customers faster,” Amazon founder Jeff Bezos said during the groundbreaking ceremony at CVG in May 2019. “That’s a big deal.”

“The airport is one of the best startup labs in the country,” Pete Blackshaw, chief executive of Cintrifuse, a startup and entrepreneur organization, told MarketWatch. “It is redefining [Cincinnati] as a great supply way.”

In addition to a sweetheart tax deal with local officials, Amazon was drawn to Hebron because of available land and a fast-modernizing airport. CVG deploys autonomous vehicles to move luggage; the fleet is managed via a 5G network. Sensors manage bathroom cleanliness and a tram system that shuttles passengers between terminals and baggage claim. “We are trying to build a micro-smart city here,” Cobb said.

Some 100 miles northeast, in New Albany, Ohio, data centers have sprouted smack dab in the middle of the state for Amazon, Facebook Inc. FB, , and Google parent Alphabet Inc. GOOGL, GOOG, . The area is a core hub for the physical infrastructure of the internet that billions of people rely on.

Google, which operates a $600 million data center in New Albany, said it plans to invest another $1 billion in the area. The company will also buy more than 600 acres in Columbus and Lancaster as potential future data center sites. Google benefited from $54 million in tax breaks from the Columbus City Council to build the data center, which will bring 20 jobs.

The growing appeal of small town, USA, particularly in Ohio, for tech giants comes down to a mantra in real estate: Location, location, location. About 60% of North America’s population is within 500 miles of Cincinnati; CSX Corp. CSX, operates one of the largest rail yards in the U.S. in the Queen City; and the EPA’ second-largest research facility is in Cincinnati.

“Cincinnati is close to everything. It is a physical distribution hub by air, highway, river, and rail,” says Mike Venerable, chief executive of CincyTech, which has a portfolio of more than 30 startups across the digital, healthcare, and food industries.

“Ohio is working hard to be very business friendly” with bills that minimize regulation, John Navin, an economics professor at Ohio Northern University, told MarketWatch. The Republican-dominated state legislature, for example, has pushed bills that give businesses wide latitude with COVID/vaccination/mask rules to make it easier to run and operate.

A modest but thriving tech community

To be sure, the tech scene in Ohio — while growing — is about the size of a large Silicon Valley employer. Cincinnati, Cleveland, and Columbus have approximately 125,000 high-tech workers, compared to the 373,000 in the San Francisco Bay Area, according to employment research by region. Indeed, in it’s “Tech Talent Scorecard Ranking” of the top 50 U.S. markets, CBRE places Columbus at No. 31, Cincinnati at No. 42, and Cleveland at No. 44. By comparison, Salt Lake City is No. 18 and Milwaukee is No. 49.

Migration patterns based on frequently updated U.S. Postal Service data do show an exodus from dense, high-cost urban metro areas such as the San Francisco Bay Area, New York, and Seattle in 2020, but the outflow was modest in most cases, according to a CBRE analysis in April.

Cincinnati has leveraged its location and business-friendly environment to compete with other regions such as Indianapolis, Nashville, and Austin, Texas.

“We are about a decade behind [Pittsburgh] in tech, but we have a more diverse economy,” says Venerable, pointing to the corporate headquarters of Procter & Gamble Co. PG, and Kroger Co. KR, in Cincinnati, as well as the prevalence of insurance companies, banks, supply chain companies, manufacturing facilities, health care firms, and digital media startups.

“Major companies are at a tipping point of redefining themselves” through technology, says Blackshaw. “There is a symbiotic need between their needs and our startup stable that could change everything.”

Two local examples underscore the marriage of Fortune 500 companies and startups: Medical wearable device maker Enable Injections Inc., which has developed a yo-yo-sized gadget to ease the injection of drugs through a tiny needle, and 80 Acres Farms, an environmentally-friendly producer of lettuce that is grown and harvested indoors with no soil, minimal water, and under pink-purple lamps.

Enable’s enFuse device, which can be affixed to the patient’s body and dispenses medication while the subject goes about their tasks, could be a breakthrough in a potential $1.2 trillion market by 2030. It plans to ramp up production of the device into the millions in a few years. Among its commercial partners are Genentech, a subsidiary of Roche Holding ROG, , and Eli Lilly & Co. LLY, . Enable has partnered with Flex to mass-manufacture its product.

High-tech plant factory 80 Acres Farms, whose goods are sold through Amazon’s Whole Foods Market Inc. and Kroger, is not just changing the way plants are grown but also streamlining the convoluted system of food production, pricing, and distribution in the U.S., according to Mike Zelkind, a former food company executive who is 80 Acres Farms CEO. Most important, it has eliminated so-called food miles in transporting produce by truck and rail across the country.

What’s happening in Cincinnati is occurring in other cities of the heartland, an upshot of being near major intersections for transportation hubs and internet infrastructure; a realization by older, more established companies based in the Midwest that they must partner with high-tech startups to innovate; and a consequence of the pandemic and its profound impact on work locations.

Untethered by the need to work out of an office, pandemic-era employees have been liberated to work from anywhere, creating distributed workforces.

“You can now work for the best job, and live for the best life,” says Phil Libin, CEO of All Turtles, an artificial intelligence startup studio. In December, he decamped San Francisco for Bentonville, Ark.

“I just wanted to get out of San Francisco. It had become pretty unpleasant: Forest fires, crime, the whole vibe,” says Libin, the founder of app maker Evernote Corp. “Once I could work from anywhere, the risk-reward just wasn’t worth it.”

Libin didn’t intend to stay long in Arkansas. The plan was to stay a few months, then go to Boulder, Salt Lake City, and Japan. But he is sticking in the town where Walmart Inc. WMT, is headquartered because of the quality of life and affordability.

“This is the kind of thing possible and accessible now for a few million people, in companies that are fully distributed,” he said. “Our employees are all over the place.” Two-thirds of All Turtles’ employees have moved from San Francisco the past few years.

There is a special moniker for Ohioans who come back to the Buckeye state after work stints elsewhere. “We call them Boomerang Buckeyes,” Chris Berry, president of OhioX, a nonprofit dedicated to helping make Ohio a leading tech hub, told MarketWatch.

Chris Bergman has had a front row seat. He grew up in Cincinnati, spent some time on the East Coast, and returned to his hometown to start Gylee Games in 2019. The videogame development studio’s Ra Ra Boom! is due as early as next year. “There is a maturity of funds. We are seeing a generation of entrepreneurs here, and most of them are staying,” says Bergman, who like others emphasizes the spirit of collaboration over competition in the Midwest.

VC Venerable, raised in Hamilton, Ohio, worked for 15 years in the Washington, D.C., area before returning to his home state in 2004 to raise a young family.

“A risk standard is developing in the Midwest,” said Venerable, whose portfolio of investments include “deep-thinking companies that address big issues” such as health care and climate-friendly food production. “We believe in edge thinkers.”