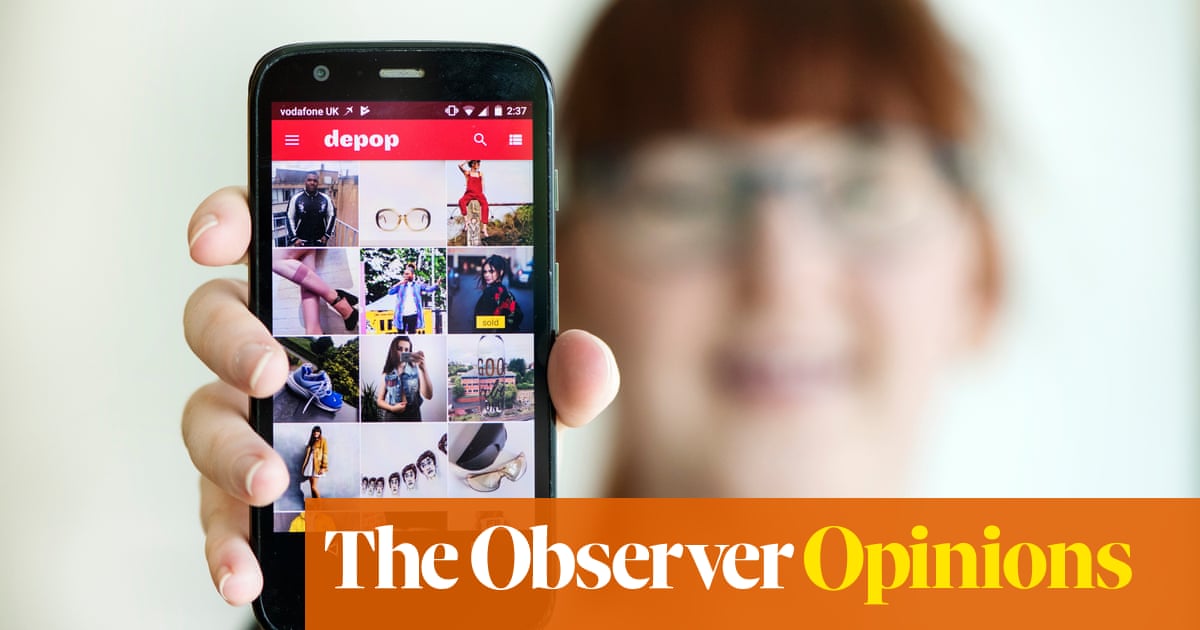 Depop, the fashion resale app, has joined fellow British tech companies such as Arm Holdings and DeepMind in heading to a deep pool of investment outside its homeland.

London-based Depop’s acquisition by Brooklyn-based Etsy for $1.6bn (£1.1bn) last week came just days after Oxford-based WaveOptics, a maker of displays used in augmented-reality glasses, was bought up by the Santa Monica-headquartered owner of Snapchat for $500m.

Depop may not be of such strategic importance to the UK economy as the likes of Arm, or fellow chip-maker Imagination Technologies, both bought by foreign buyers. But its 30 million users – a number that has tripled in less than three years – are mostly under 26 and mark out the future direction of retail: more online, sustainable and social.

London crowed about securing the listing of Deliveroo, where the poor performance of the share price has reflected concerns about the welfare of its thousands of delivery drivers. Depop marked out a more hopeful future – but with it now in Etsy’s hands, British retailers have no obvious way of following the lead of John Lewis and then Marks & Spencer, which invested in Ocado, enabling both to buy their way into the fast-growing world of online grocery shopping.

Initially, Depop was a tale of triumph for the UK. Entrepreneur Simon Beckerman founded the company in Italy in 2011 but moved to London in 2015 after winning $8m in funding from Balderton Capital, the UK-based investment firm which has previously backed Betfair and the online lingerie specialist Figleaves.

The business now has offices as far afield as New York and Sydney, but is led from the UK, where it built its market from an aesthetic steeped in British fashion trends, from Burberry coats and chunky trainers fit for a Spice Girl to Y2K fashions born out of clubs in London and Manchester.

Technology is enabling growth in the market, as parents sell baby clothes via Facebook and young people trade sought-after trainers from their own Instagram shops

It taps into Generation Z’s obsession with “side hustles” – a way to earn money outside one’s day-to-day life. Trading in cast-offs is a rapidly expanding activity expected to grow 15-20% a year for the next five years, outgrowing fast fashion.

That growth is not only fuelling more established players such as eBay, but generating new entrants such as Vinted, Poshmark and The RealReal, which provide a challenge to traditional high street brands.

The resale market is becoming increasingly mainstream, with even the UK supermarket Asda trying out secondhand sections in stores, in partnership with Preloved Vintage Wholesale. Department store John Lewis, furnishings group Ikea and sports retailer Decathlon are all experimenting with resale businesses too.

Technology is enabling that growth, as parents sell baby clothes via Facebook and young people trade sought-after trainers from their own Instagram shops. Selfridges now has an outlet for vintage fashion specialist Vestiaire Collective, while handbag label Mulberry is refurbishing and reselling its used products online.

Etsy is to allow Depop to continue as a standalone business run by the existing team from London. That is some good news at least for jobs and knowhow in the UK, although with upstarts such as Vinted and Asos’s marketplace already on its tail, it’s not clear if Etsy will enable Depop to keep its edgy, underground feel.

The change in ownership also will not prevent young UK entrepreneurs developing, via Depop, skills in online selling, design and merchandising that could lay the foundations for new standalone businesses.

There is hope the UK can capitalise on their expertise to keep the resale sector on British shores, even if we can’t compete with the deep pockets of the US tech giants.

AMC cinemas become star of their own Wall Street drama

What do you do when legions of small investors are buying your company’s shares to use as a stick with which to beat Wall Street? The answer for AMC Entertainment – the world’s largest cinema company and owner of the Odeon chain in the UK – is to make sure they’re buying at least some of that stock from you.

When the same thing happened to GameStop, the US video game retailer was little more than a passenger in the proceedings.

AMC is trying to ride the tiger. In January, it escaped bankruptcy thanks to a $917m debt-and-equity cash-raising exercise. Now, instead of thinking about survival, it is capitalising on the surge in its stock price to issue more new shares at higher values that it could otherwise have achieved. It has even offered investors free popcorn.

Cash from new investors can be used to pay down some of the rescue debt and even to expand.

Last Tuesday, it sold stock for $230.5m to Mudrick Capital Management (a hedge fund, ironically), having previously raised $428m in mid-May, when the small-investor frenzy began lifting its share price. And on Thursday, it filed to sell 11.5 million more shares.

Speaking via Twitter, increasingly the platform of choice for market-moving statements, chief executive Adam Aron said this was “not mindless dilution, but rather this is very smart raising of cash so that we can grow this company”.

He is banking on vaccinations and a pent-up flurry of blockbuster movies to deliver a dramatic turnaround for a firm that looked like a total turkey just a few months ago.

Whether one sees the “meme stock” phenomenon epitomised by GameStop and AMC as an exercise in futility, borderline market manipulation, or a welcome piece of anti-Wall Street online activism, Aron seems to have found a solution that works for AMC. It may not be long before his own cinemas are showing the movie.

ExxonMobil’s chief executive, Darren Woods, has has the dubious honour of overseeing probably the most calamitous period in the oil giant’s history since taking the reins a little over four years ago. Under his watch the company has lost a third of its market value, been ousted from the Dow Jones index, and reported its first annual loss since Exxon and Mobil merged in 1998.

But it is Woods’s handling of ExxonMobil’s first major shareholder rebellion that is likely to raise questions over his future at the helm of America’s biggest oil company. Engine No 1, the upstart hedge fund that toppled three senior business figures from the Exxon board last week, did not target Woods. But its boardroom coup has been seen by industry observers as a clear indictment of his leadership.

Engine No 1 put forward four alternative board members after accusing Exxon of failing to adapt to the climate crisis – and the company’s largest shareholders agreed. Investors may be willing to forgive Woods for inheriting a difficult situation before the Covid-19 oil slump, but his failure to set a future-proof vision for navigating the transition to low-carbon energy has become deeply worrying for its long-term institutional stakeholders, which include some of the biggest money managers in the world.

Woods survived the boardroom battle because a greater concern – over the short term – would be losing the chief executive at a time of major upheaval for the board, and when existential decisions for the company still hang in the balance. Shareholders voted in favour of his position on the board at the annual meeting, but the disruption has assured that this future will be far tougher than he expected.

Before next year’s meeting, Woods will need to prove that he is up to the challenge, and set out a clear future for one of the world’s biggest climate polluters in a net-zero-carbon world. The chief executive may be down, but he is not out. Yet.