LSU and Louisiana Tech – two of the state’s four representatives in the NCAA Regionals – each placed a state-best six players on the team while combining to claim four of the five specialty awards. The 37-member team, which was selected from a combined 18 schools, was chosen by a panel of the state’s baseball sports information directors and statewide media members.

Wells, the LSWA Hitter of the Year and one of four Bulldogs named to the first team, was joined in the specialty awards by Lane Burroughs, who claimed Coach of the Year for the first time.

Marceaux, the LSWA Pitcher of the Year was joined in the specialty awards by LSU outfielder Dylan Crews – the LSWA Freshman of the Year – with Louisiana Ragin’ Cajuns catcher Drake Osborn voted as the state’s Newcomer of the Year.

Wells hit .385 with 14 home runs and 61 RBI in a record-setting season that saw him break his own single-season hits record (101) and becoming the first Bulldog in school history to surpass the 100-hit mark in a season. The third baseman – who led Conference USA in average, hits and total bases (169) – became Louisiana Tech’s all-time leader in hits (279) and triples (10) while setting the single-season record in total bases.

A first-team All-CUSA selection, Wells ranked second in the C-USA in slugging percentage (.645) and runs scored (70) and tied a single-game, program record with nine RBI in the Bulldogs’ 18-2 win over Rider in the opening game of the Ruston NCAA Regional. Wells also strung together a 20-game hitting streak which began on March 16 against Ole Miss before being snapped in mid-April 18 against Southern Miss.

Marceaux earned third-team All-America honors by Baseball America and was a second-team All-SEC pick after going 7-7 on the mound with a solid 2.54 earned run average. The Destrehan, La., native ranked fifth in the SEC in ERA, led the league in innings pitched (102.2) and was seventh in strikeouts (116).

Coming off a 101-pitch performance in LSU’s regional opener against Gonzaga, he came back two days later and helped LSU claim the NCAA Eugene Regional with 2.1 innings of relief – his lone appearance out of the bullpen in 2021 – in earning a win over Oregon in the regional title game.

Crews, both a National Collegiate Baseball Writers Association (NCBWA) All-American and Collegiate Baseball Freshman All-America, hit .362 at the plate with 18 home runs and 62 RBI in his first season at LSU. The second-team All-SEC pick ranked fourth in the league in batting average, was fourth in hits (89), runs scored (64) and on-base percentage (.453). 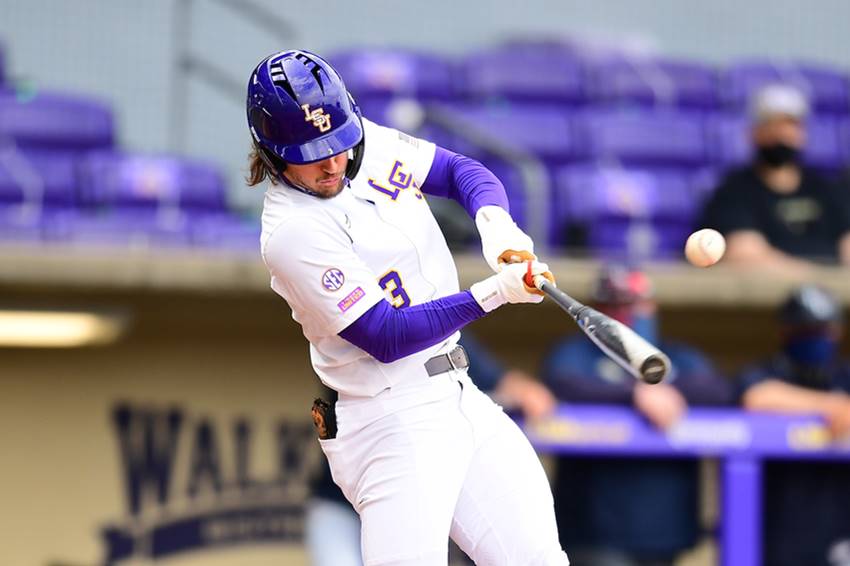 He was named to the 45-man Midseason Watch List for the 2021 Golden Spikes Award and was voted to the NCAA Eugene Regional All-Tournament team after batting .476 (10-for-21) with two doubles, one triple, three homers, four RBI and six runs.

Osborn, a transfer from Texas A&M-Corpus Christi, shined in his lone season behind the plate for the Ragin’ Cajuns, earning first-team All-Sun Belt Conference honors while being named the league’s Newcomer of the Year. The Buster Posey Award semifinalist – who threw out a Sun Belt Conference-best 19 runners on the season – hit a team-high .336 for Louisiana with a pair of home runs, 15 doubles and 20 RBI.

Burroughs led the Bulldogs to a historic season, earning their sixth 40-win season in school history and hosting an NCAA Regional for the first time in school history. Under Burroughs, Louisiana Tech posted a 42-20 record and knocked off three SEC opponents during the same season for the first time since 1987 – including then No. 1-ranked Arkansas along with No. 4-ranked Ole Miss – along with Alabama in the NCAA Ruston Regional.

Joining Marceaux on the mound as first-team members were Connor Cooke of Louisiana, McNeese’s Will Dion and Jonathan Fincher of Louisiana Tech. Tulane’s Bennett Lee was the first-team catcher with Wells being joined in the infield by Bulldog teammate Taylor Young (second base), Tulane shortstop Collin Burns and LSU freshman first baseman Tre’ Morgan.

Crews was joined in the outfield by Louisiana Tech’s Parker Bates and McNeese’s Clayton Rasbeary, who joined his teammate Dion as the lone repeat members from the 2019 LSWA team.

Gavin Dugas (LSU), Pearce Howard (New Orleans) and Steele Netterville (Louisiana Tech) made up the outfield on the second team with Louisiana’s Ben Fitzgerald selected as the DH and Manny Garcia of Louisiana Tech as the utility player.