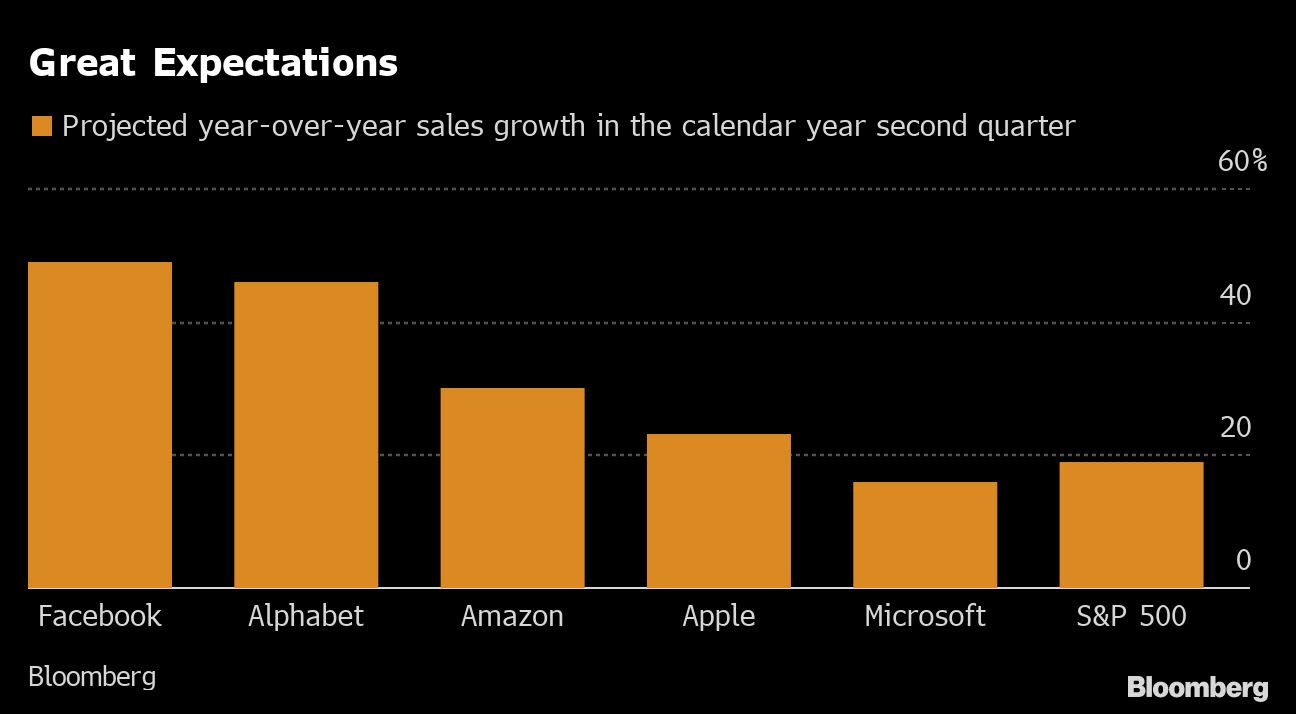 (Bloomberg) — Investors are getting excited about Big Tech again.

With resurgent doubts about the strength of the post-pandemic boom, traders are shifting back into the tech behemoths whose dominance of high-growth industries leaves them poised to keep sales and profits rising even if the economy slows.

That’s fueled a run of outperformance since the beginning of June and marks a shift from early this year, when the so-called reflation trade was all the rage as investors plowed into the stocks of companies whose fortunes are closely tethered to cyclical swings in the economy.

As a result, the market value of the five biggest technology companies — Apple Inc., Microsoft Corp., Amazon.com Inc., Alphabet Inc. and Facebook Inc. — has surged more than $1 trillion since the beginning of June.

“Growth at 100% can’t be maintained and, as this subsides back to something more normal, that is going to push investors back in the direction of growth stocks,” said Jim Meyer, chief investment officer at Tower Bridge Advisors.

The tech-interest revival reflects rising sentiment that the rapid growth set off by the nation’s reopening won’t be sustained in the long run. Such views helped drive down yields on Treasury bonds this week, though that drop was partially reversed Friday during a broad-based rally in the stock market.

The tech industry goliaths may also have benefited from the cool-down in so-called meme stocks, those targeted en mass on social media by individual investors seeking to pocket quick gains. With fewer places to go, some have been gravitating to the biggest tech companies instead, according to a report by Vanda Research. The firm’s Ben Onatibia and Giacomo Pierantoni said they have seen “relentless” retail demand for the chipmaker Nvidia Corp. that is spreading to Amazon and Apple, “bringing back memories of last year’s summer rally.”

The upcoming release of second-quarter earnings reports may add to investors’ optimism. All five companies are expected to post double-digit revenue growth, with an increase of 30% seen for Amazon and 50% for both Alphabet and Facebook, according to data compiled by Bloomberg. Revenue for the overall S&P 500 is expected to expand 19%.

“They really should be owned in the long term,” said Richard Saperstein, chief investment officer at Treasury Partners, which has $9 billion in assets under management. “You have accelerating revenues, whether it’s in cloud or search or online commerce, and you have just enormous amounts of capital expenditure conducted annually that leads to potential new business opportunities and innovation.”

The fate of the five biggest U.S. technology stocks has huge sway over broader market indexes: with a combined value of about $9 trillion, they account for nearly a quarter of the S&P 500 index and are worth more than its smallest 356 companies combined, according to data compiled by Bloomberg.

So far, Apple and Amazon have led the rebound in megacap tech. Apple got a boost this week from JPMorgan Chase & Co., which said it’s a good time to buy the stock because excitement about the company’s next iPhone will build in the second half of the year. Shares of the Cupertino, California-based company rose 3.7%, hitting its first record in five months.

Amazon.com notched a 5.9% gain in its first week under the leadership of Andy Jassy, fueled in part by the Pentagon’s announcement that it will scrap the $10 billion contract it had awarded to Microsoft in 2019 and divide the job between the two.

China’s crackdown on technology companies such as ride-hailing giant Didi in recent weeks increased interest in U.S. companies as an alternative. And Facebook was aided when a judge recently dismissed a lawsuit by the Federal Trade Commission, driving the company’s valuation over $1 trillion for the first time.

The recent surge has been met with plenty of skepticism. According to Bank of America Corp., clients have been selling into the recent rally. Tech and communication services — the sector that includes both Alphabet and Facebook — “have seen record or near-record sales over the last four weeks.” Bank of America strategist Jill Carey Hall said the outperformance appears to be “a head-fake.”

David Katz, chief investment officer at Matrix Asset Advisors, doubted that the outsize run for companies such as Apple can be sustained.

“It is a powerful company that has recreated itself several times over, but it is not cheap,” he said in an interview. “We own it and are comfortable with it, but we think the sizable six-week breather in the rotation to value will be just that: a breather.”