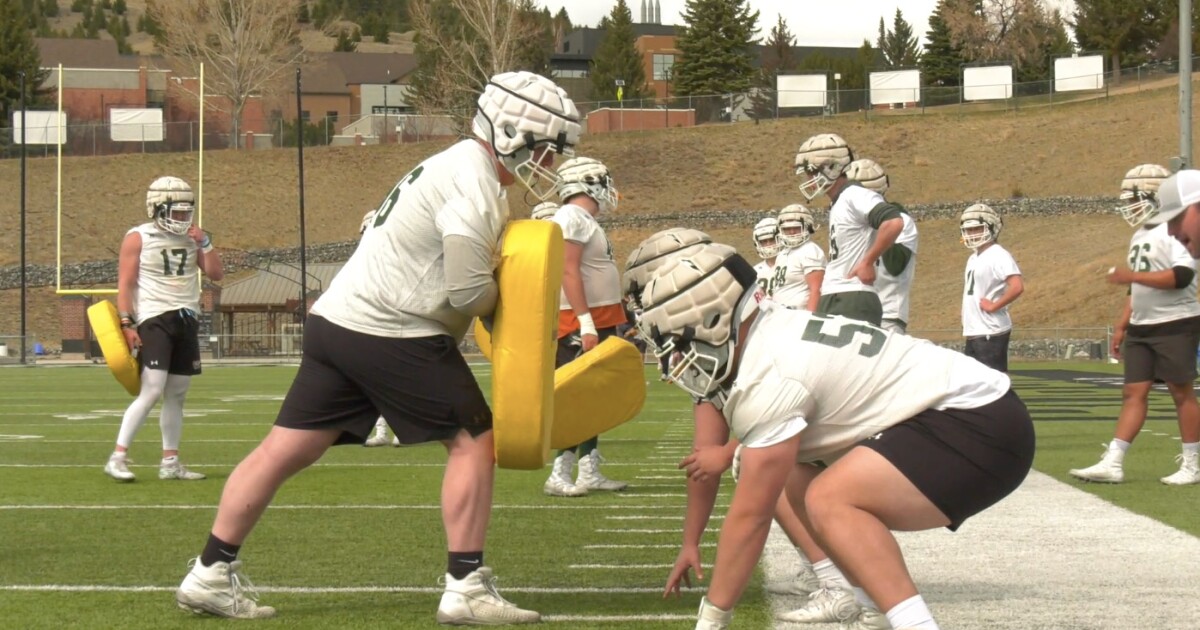 BUTTE — Football was back at Bob Green Field on Friday as Montana Tech opened up a 15-day spring camp.

There are a lot of questions to be answered and a lot of work to be done over the coming weeks, but the Orediggers are finally back in action.

“All week we’ve all been pretty excited,” said redshirt junior quarterback Jet Campbell. “Getting through finals, finally done with school, we just get to hang out — two straight weeks of just football and hanging out with the guys. We’re all pumped.”

With the spring semester over, the Orediggers are done hitting the books and are ready to hit the field again. Tech has been waiting for this moment for a year and a half.

“Just excited, really excited. It’s been a long time coming,” junior defensive lineman Logan Kolodejchuk said. “Been a lot of ups and downs, but I think overall we’ve been preparing as much as we can in the gym. We try to get out on the field a little bit. But overall, yeah, just a feeling of excitement to be able to be out here to be able to finally practice and get back with the boys and start work on our family.”

Kyle Samson is now in his second year coaching the Orediggers and is finally getting to run his first spring camp after last year’s camp was canceled due to the coronavirus pandemic. The Frontier Conference then delayed the fall football season to this spring, but Montana Tech opted out of the four-game spring schedule.

The next two weeks will be all about getting back to basics.

“Been a long time since we could get out here, so just trying to get a little better every day, really focusing on our fundamentals, and then getting into our 11-on-11 stuff and our team stuff, just competing,” Samson said. “We have no idea right now what our depth chart is, so we’re really trying to set that in the next 15 days. Really just getting out here having fun competing and really just trying to make the Diggers a little better every day. Really just putting guys in different spots, seeing what they can do. But, yeah, I think mentally we’re ready to go, but now we’ve just got to go and see if we can do it physically.”

Tech on Friday also announced its fall schedule. The Orediggers will open the 2021 football season at home against Eastern Oregon on Aug. 28 with the annual Copper Game sponsored by Rocky Mountain Credit Union.

Homecoming is slated for Sept. 25 against Montana Western. The Orediggers will celebrate the Hall of Fame Class on Oct. 9 against the College of Idaho.

Rocky Mountain College travels to Butte on Oct. 30. The final game of the season is at home against Montana State-Northern on Nov. 13 for Senior Day.

The Orediggers play three teams twice, traveling to Rocky on Sept. 18, MSU-Northern on Oct. 2, and Montana Western on Nov. 6.

Carroll College hosts the Orediggers on Sept. 4, and Tech makes the long journey to Ashland, Oregon, for a game against Southern Oregon on Oct. 23

The Orediggers are planning for full stadiums with fans next fall. Season-ticket information will be released next week.