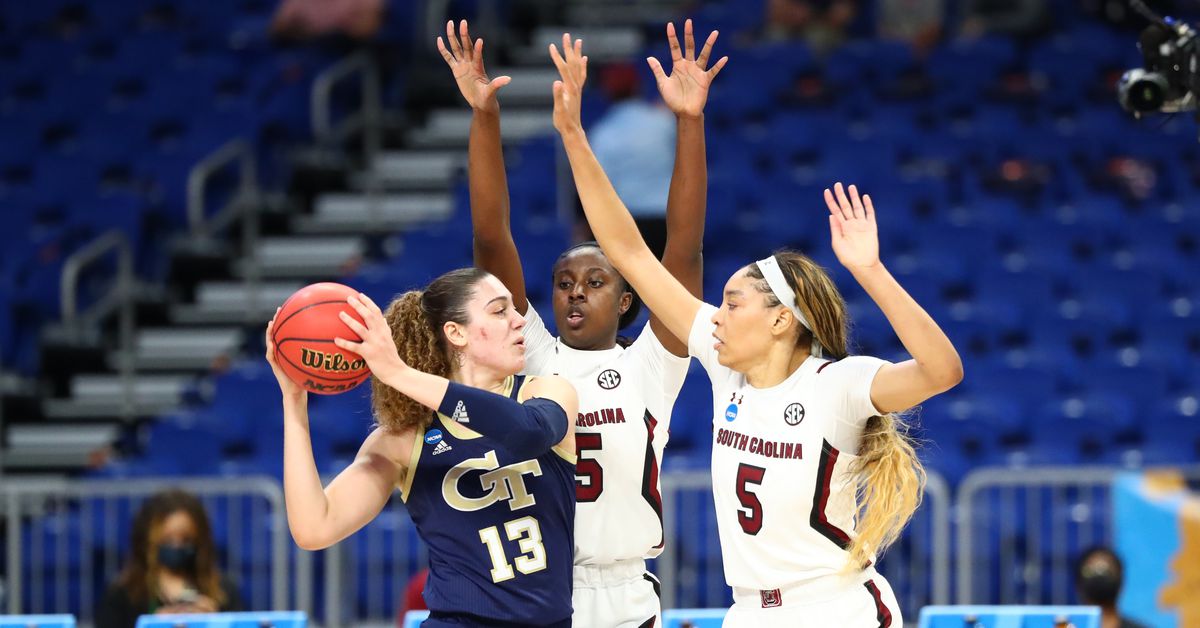 No. 1 seed South Carolina’s frontcourt players not named Aliyah Boston provided the scoring and rebounding needed for the Gamecocks to take down the No. 5 seed Georgia Tech Yellow Jackets 76-65 on Sunday in San Antonio, allowing the team to advance to the Elite Eight.

Laeticia Amihere had 15 points (seven rebounds) and Victaria Saxton had 12 (six rebounds) to lead South Carolina. Zia Cooke added a phenomenal 5-of-6 effort from distance and 17 points (11 in the first half). Cooke made two key threes to maintain the lead in the fourth after Amihere and Saxton had put the team in a position to win.

Lotta-Maj Lahtinen notched a game-high 20 points and added five assists in defeat for a Georgia Tech team that never got closer than six in the fourth. Yellow Jacket star Lorela Cubaj had 15 points and seven boards and Kierra Fletcher was good for 16 and seven.

Lahtinen scored her first basket of the third to cut South Carolina’s lead to 62-50 with four seconds left before the fourth, but the damage had been done. The Gamecocks won the third 23-15 and led by their largest margin of the frame (17) on a Saxton layup with 2:14 to go.

After Fletcher scored to cut Georgia Tech’s deficit to two to open the second half, Boston reeled off seven-straight points (her first seven of the game) to put South Carolina up 46-37.

Loyal McQueen made a difficult three while she was rushing to create a shot on the right wing as time was winding down in the first half. That triple cut Georgia Tech’s deficit to 39-35.

For the most part, it was Lahtinen keeping the Yellow Jackets in the game in the second. She made a three right before McQueen’s that cut it to 39-32. Earlier in the frame, 5-0 individual runs by Cubaj and Lahtinen cut it to 26-21 and 30-26, respectively.

A Destiny Littleton 3-pointer at the 8:41 mark of the second gave South Carolina its first double-digit lead at 26-16. That capped a 7-0 Gamecock run to open the frame.

South Carolina took its biggest lead of the first quarter (10-4) on a Destanni Henderson fast break layup with 5:59 to go.

Cooke got hot early with a tear drop that rattled in and, later, back-to-back 3-pointers that made it 5-4 and 8-4 in favor of the Gamecocks. She accounted for South Carolina’s first eight points and Boston was held scoreless on 0-of-4 shooting from the field in the first half.