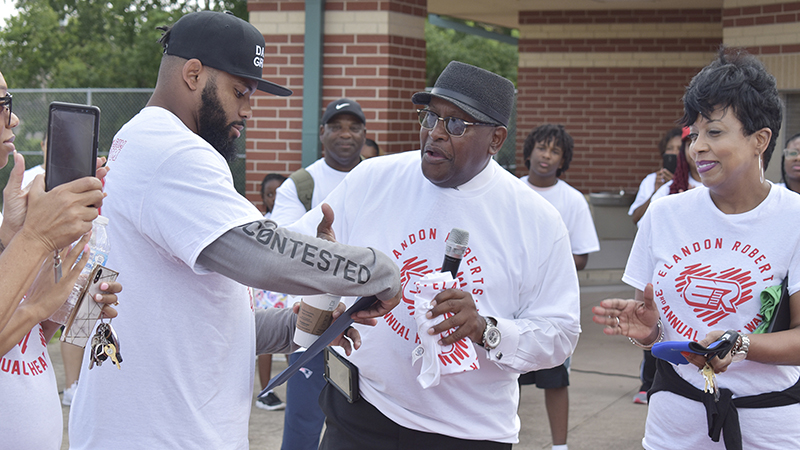 NFL player and Port Arthur native Elandon Roberts is investing in his hometown in the form of a new business while offering job opportunities.

Roberts and business partners are planning to break ground in the next week two weeks on Spindletop Concrete Inc.

The plant will be located on Old Ferry Road near the Veterans Memorial Bridge.

Roberts said plans have been in the works for a while but were delayed due to COVID-19.

The plant will provide job opportunities for people in Port Arthur and the Golden Triangle, he said.

The group owns 20 acres of land and five of those acres will be devoted to the concrete plant.

And, like any job, applicants have to show they have the ability to do the work. There are opportunities to learn concrete mixing, how to pour concrete and drive the concrete trucks.

Roberts said they hope to open the business in September or October.

Mayor Thurman Bartie remembers Roberts since the sports star as a student in the Port Arthur Independent School District and has known the professional football player’s family for a long time.

“I was totally impressed with his desire to come back and join with another group of people who are investing and him becoming the principal on it,” Bartie said. “He could do whatever he wants to do with his money. I am totally impressed he would make an investment in his hometown.”

Councilman Cal Jones said he is also excited at the news that Roberts is joining in with other investors in the concrete business that will be located in Port Arthur.

The business will also offer job opportunities and give job seekers an option other than cleaning up, sweeping and fire watch, which is common in other industries.

Roosevelt Petry, one of the investors in the business, said Spindletop Concrete means job opportunities, taxes and the business and is expected to buy approximately 10 million gallons of water per year from the city.

He said they are looking to hire local with jobs and help the individuals become operators or obtain a CDL license to work with heavy equipment in jobs that will bring in good wages.

“There is a dire need for concrete here and all over the country,” Petry said. “We’re going to help fill that void.”
Roberts is a 2012 Memorial High School graduate who spent his few first seasons in the NFL with the New England Patriots and is now a linebacker with the Miami Dolphins.