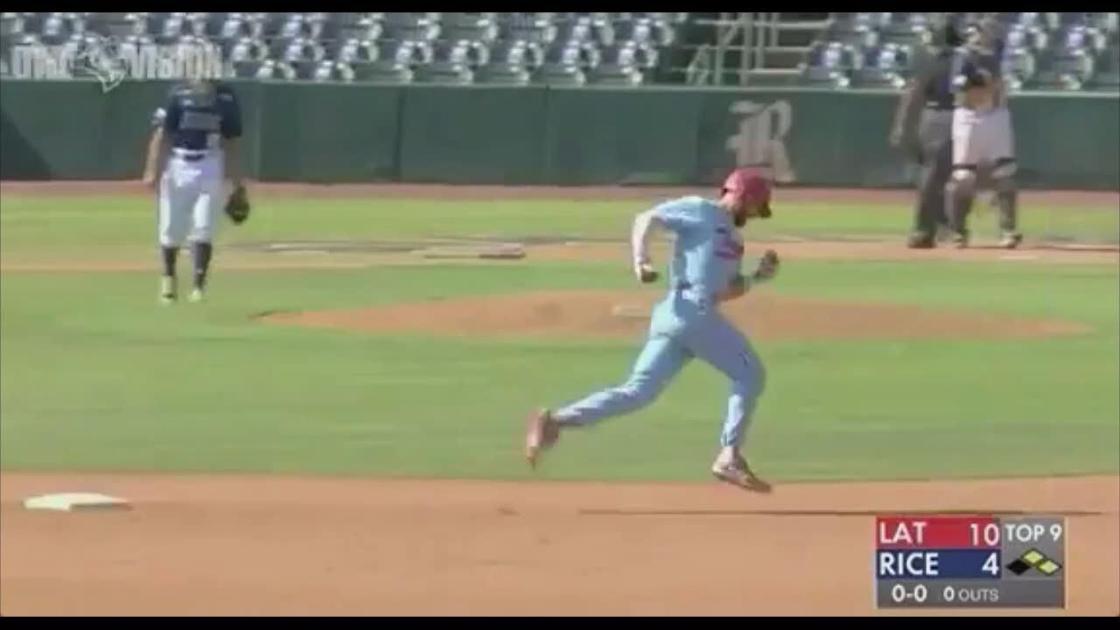 After Rice (13-18-1, 2-9-1 C-USA) tallied two runs in the fourth to jump ahead 2-1, the Bulldogs reeled off two in the fifth and four in the sixth to establish a five-run cushion. The top of LA Tech’s batting order began the scoring run in the fifth with Taylor Young, Hunter Wells and Parker Bates each reaching base to load the bases with nobody out. Cleanup batter Manny Garcia then put the Bulldogs in front for good with a two-RBI single to left field, putting the Bulldogs up 3-2.

LA Tech (24-7, 10-2 C-USA) then scored four runs in the top of the sixth to extend its lead. Catcher Kyle Hasler launched a solo shot to left field for his second home run of the series, making it 4-2 Bulldogs. Bates then tacked on another run with an RBI single through the right side with two outs. Designated hitter Jorge Corona capped off the four-run frame with a two-out, two-run single to push the visitor’s advantage to 7-2. Three of LA Tech’s four runs in the sixth came with two outs.

“We talk about the ingredients of a big inning, walk, HBP and an error,” head coach Lane Burroughs said. “Right there in the fifth were your walks and the error, and Taylor Young was in the middle of it, so it’s not surprising.

“We embrace the walk, and people don’t like to talk about walks, but it leads to big innings. It’s a big part of what we do, and it seems like Manny keeps coming up with big hits for us.”

The Owls clawed two runs back in the seventh to trim LA Tech’s lead to 7-4, but the Bulldogs again answered Rice’s two-spot with a two-spot of their own in the top of the eighth. Garcia sent a chopper over the shortstop’s head for an RBI single to make it 8-4 before Philip Matulia recorded an RBI with a bases-loaded walk. The Bulldogs’ offense drew 29 walks over the weekend while Tech’s pitching staff allowed just five free passes in 32 innings.

The Bulldogs put the exclamation point on the series sweep with four more runs in the ninth, pushing the score to its final tally. Young recorded an RBI single to score shortstop Logan McLeod from second, making it 10-4 Diamond Dogs. McLeod led off the inning with a double to left field.

Bates then blasted a three-run homer to right field, unloading on the first pitch of the at-bat to score Wells and Young to extend the lead to 13-4. Bates’ blast pushed LA Tech’s run tally to double digits for the ninth time this season. The Bulldogs have outscored their opponents 195-91 in weekend games in 2021.

On the mound, right-hander Jarret Whorff earned his sixth pitching victory after tossing six-plus innings with six strikeouts. Fellow right-hander Kyle Crigger then recorded the final nine outs for the Bulldogs out of the bullpen, picking up his first save of the season and the second of his career. Crigger struck out a pair of Owls and induced LA Tech’s third ground-ball double play of the day in the seventh.

Wells’ red-hot bat continued to shine at Reckling Park over the weekend as the third baseman finished the weekend 11-for-18 with seven RBI, eight runs scored and a home run. Wells went 4-for-6 in Sunday’s victory with a double and a team-best four runs scored, extending his hitting streak to 17 games. Wells and Bates are both batting over .430 in Conference USA play in 2021.

Sunday’s win also moved the Bulldogs to 7-0 on “championship” Sundays. Tech sits alone atop the C-USA’s West Division with Southern Miss (21-9, 8-3 C-USA) coming to Ruston next weekend for a huge matchup between the West Division’s top two teams in the standings.