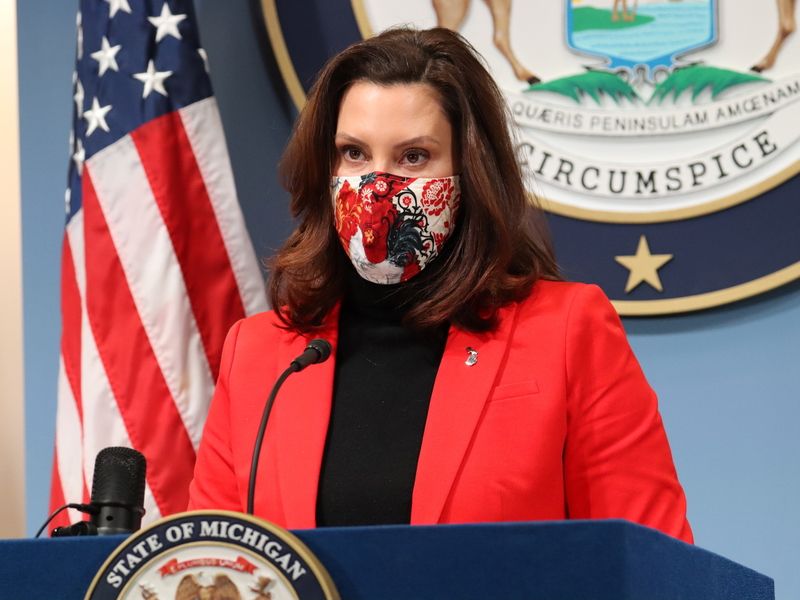 Neither the governor nor the jet’s operator are answering questions about whether Whitmer used the plane co-owned by the Nicholson, Cotton and Moroun families in mid-March to visit her father in Florida.

Since revelations last month that Whitmer briefly left the state for a previously undisclosed trip to see her elderly father amid the ongoing coronavirus pandemic, the governor and her office have steadfastly refused to say where she went, when she went and whose plane she took.

When asked Thursday, the governor’s office would not say whether Whitmer used the plane operated by Air Eagle, a limited liability corporation registered at the same Harper Avenue address as the Detroit headquarters of the Nicholson family’s PVS Chemicals Inc.

In a statement, Whitmer spokesman Bobby Leddy neither confirmed nor denied Whitmer used the businessmen’s jet to visit her father, Dick Whitmer, the retired CEO of Blue Cross Blue Shield of Michigan.

“This was not at the expense of taxpayers and not a gift,” Leddy said in an email.

The governor’s office did not answer a question from Crain’s about whether a not-for-profit political group controlled by the governor paid for her personal travel. Groups organized under section 501(c)4 of the federal tax code can shield the identity of donors and are subject to looser rules than political campaigns when it comes to spending donated funds on personal uses.

Through flight data, public records and sources, Crain’s was able to confirm the plane in question was connected to PVS Chemicals, whose CEO, David Nicholson, did not return a message seeking comment. His brother, John S. Nicholson, is listed as Air Eagle’s registered agent in state incorporation records.

Air Eagle issued a statement Thursday to Crain’s that confirmed it owns a Gulfstream G280 jet, while not answering questions about whether Whitmer was a passenger on the plane in mid-March.

“Unfortunately, Air Eagle is unable to respond to inquiries about the story,” the company’s statement reads. “As a matter of policy, Air Eagle does not disclose the identity of its members, its passengers or flight details.”

The Moroun family, owners of the Ambassador Bridge and trucking and logistics companies, confirmed late Thursday they are a part owner in Air Eagle and its plane.

“The Cotton family was not aware of any flight the governor took on this plane,” Cotton told Crain’s.

Whitmer sidestepped questions from reporters Thursday about the Deadline Detroit report while touring a road construction site in Clare.

“I’ve said everything I’m going to say about my trip to go check on my father,” Whitmer told reporters. “It was a quick trip, it was an important family reason for doing and I’ve got nothing to add.”

The Democratic governor said there’s a reason why she doesn’t disclose her travels, even after the fact, WWTV/WWUP-TV 9&10 News reported.

“I’ve received an incredible number of death threats over the last year and a half,” Whitmer said Thursday. “There are a lot of reasons that we don’t discuss how I travel and when I travel — and that’s all I’m going to say at this point.”

On April 19, the governor’s spokesman said Whitmer traveled out of state “to assist her elderly father who is battling a chronic illness.”

Chris Gustafson, spokesman for the Republican Governors Association, said the governor needs to disclose how the Florida trip was paid for.

“The more time goes on, the more questions Michiganders have for Gretchen Whitmer about her southern sabbatical to the Sunshine State,” Gustafson said in a statement. “Dodging questions from Michiganders and ignoring media requests only raises more concerns that Whitmer has entangled herself in more cronyism and shady deals. Michiganders deserve answers now.”

Throughout the past 14 months of public health restrictions, Whitmer and her health department have not restricted out-of-state travel. She also traveled to President Joe Biden’s inauguration in January and flew to Washington, D.C. in March to visit with Michigan National Guard members stationed at the U.S. Capitol.

In November, amid the fall surge in COVID-19 cases, Senate Majority Leader Mike Shirkey, then-House Speaker Lee Chatfield, the current House Speaker Jason Wentworth and an entourage of other Republican lawmakers traveled to Washington, D.C., to meet with then-President Donald Trump at the White House.

The GOP lawmakers took commercial flights and have said they paid their own expenses.

The mid-March timeframe of the Air Eagle jet’s flight to West Palm Beach, Fla., came just as COVID-19 cases were starting to rise in Michigan and three weeks before Whitmer publicly voiced concern April 6 about spring break travel to the Sunshine State excacerbating the spring surge.

The plane later returned to Detroit on March 14, records show.

On March 15, the Gulfstream G280 flew from Detroit directly to the Palm Beach airport and departed for Lansing’s airport at 4:37 p.m. At 7:01 p.m. that evening, it was back on the ground at the Lansing airport, records show.

When news broke April 19 about Whitmer’s quiet out-of-state travel five weeks after it occurred, Whitmer’s spokesman said the governor “did not go on spring break, and she has not not left the state in over a month.”

“All trips were very brief, two full days or less, closely followed public health guidelines and were made when Michigan’s daily positivity rate was in the low single digits,” Leddy said in an April 19 statement.

On March 12, the seven-day rolling average for percentage of COVID tests coming back negative was 5.1 percent. On March 15, the seven-day average had risen to 6.1 percent, a Crain’s analysis of state COVID data shows.

But the weekly average number of new daily cases had been rising for three weeks prior to the Air Eagle plane’s trip to Florida, state data shows.

Between the Air Eagle jet’s departure on March 12 and its arrival back in Lansing three nights later, the seven-day average number of new cases of COVID-19 jumped 14 percent to 1,795.