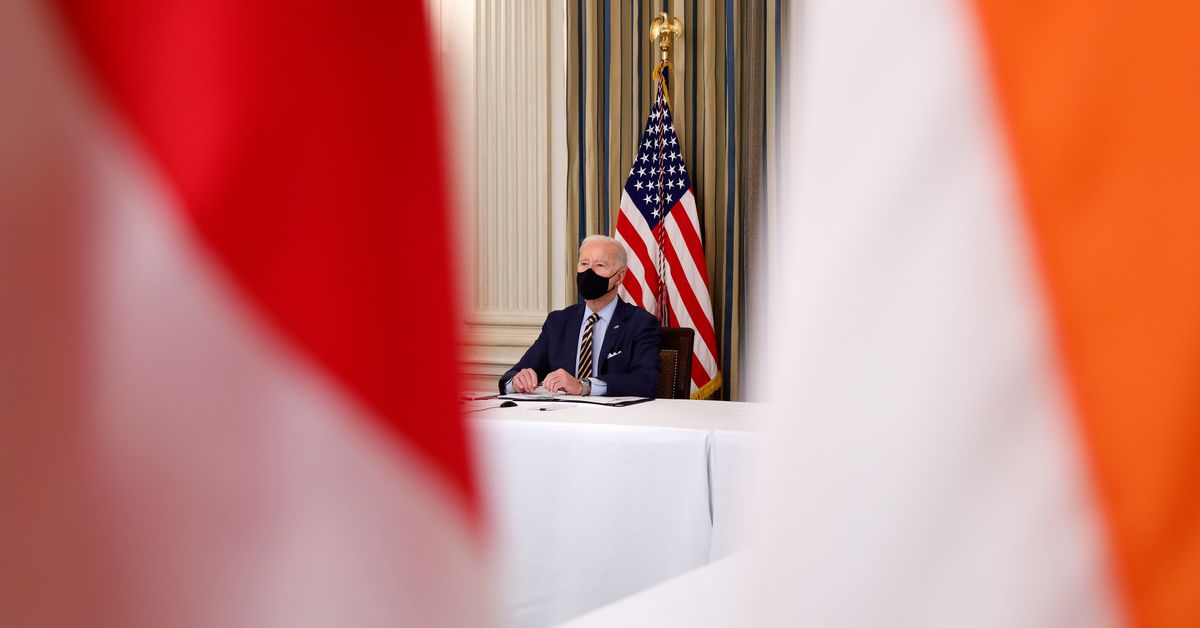 WASHINGTON, Sept 23 (Reuters) – A first in-person meeting of the leaders of the Quad group of countries – the United States, Japan, Australia and India – on Friday will yield progress in several areas including infrastructure, health and cyber, a senior U.S administration official told Reuters.

The Quad leaders – U.S. President Joe Biden, Indian Prime Minister Narendra Modi, Japanese Prime Minister Yoshihide Suga and Australian Prime Minister Scott Morrison – will also discuss regional security, the official said on Thursday, although he stressed that security was not the focus of the informal grouping that has come together in response to China’s growing power.

While declining to provide specifics, the official, who did not want to be identified, said the summit at the White House “will have much to say” about next steps on vaccines for the Indo-Pacific region.

“We have what we call deliverables in infrastructure, on broader health engagements on science and technology on the space, on cyber,” he said.

He called a commitment made at a virtual meeting of the Quad leaders in March to supply a billion COVID-19 shots across Asia by the end of 2022 “important.”

“Obviously, there have been challenges in India over the course of the summer. But … we believe that it will be important to meet the ambitions that we laid out at that time.”

The March initiative stalled after India, the world’s biggest vaccine producer, was hit by a devastating surge of infections and halted all vaccine exports.

India has since said it is ready to restart vaccine exports in the October quarter, prioritizing the COVAX international vaccine initiative and neighboring countries first.

The meeting of the Quad comes just over a week after the United States, Britain and Australia announced a security pact dubbed AUKUS that will help Australia acquire U.S. nuclear-powered submarines, a move immediately denounced by China. read more

The U.S. official called Friday’s meeting “historic,” and an opportunity for the four leaders to talk openly about “modern challenges, their hopes and aspirations.”

“We’ll talk about a variety of things, including regional security, but we’ll also talk about our goals on education, on infrastructure,” he said.

“The linking and thickening of ties between our four countries is taking place before our eyes,” he said. “What we are really trying to do is create an opportunity for more free-flowing discussion.”

At the same time, he added, when asked how the Quad might relate to the AUKUS partnership: “This is a standalone grouping and has nothing to do with the recently inaugurated AUKUS. This is an informal grouping. It does not address security issues.”

Citing a draft of a joint summit statement, Japan’s Nikkei business reported last week that the leaders are also expected to agree to take steps to build secure semiconductor supply chains, a key area of competition with China.

The official said Biden would announce on Friday an “elite” privately funded Quad fellowship program for 100 students – 25 from each of the four countries – to pursue STEM (science, technology, engineering and mathematics) masters and doctoral programs in the United States.

Comparing it to Britain’s Rhodes scholarship program, the official said the fellowship would be administered by the Schmidt Futures philanthropic initiative, founded by former Google chief executive officer Eric Schmidt.

“It will really seek to tie our countries together for the long haul by connecting our young people, and they’ll have a sense of purpose, and a sense that the Quad is indeed a unique and important grouping,” he said.

CEO Eric Braverman said in a statement that Schmidt Futures was “honored” to lead the Quad fellowship.

China has denounced the Quad as a Cold War construct and said the AUKUS alliance would intensify an arms race in the region.

The U.S. official rejected Beijing’s concerns, and pointed out that China in recent decades has undergone one of the most rapid military expansions in history.

“We’ve seen dramatic steps on China’s military buildup over the course of the last couple of decades and much of that has triggered some anxiety in the region,” the official said.